March 9, 2012 at 9:37 AM ET by Alan Krueger, Alan B. Krueger
Twitter Facebook Email
Summary:
Private sector payrolls increased by 233,000 jobs and overall payroll employment rose by 227,000 jobs in February. The economy has added private sector jobs for 24 straight months, for a total of more than 3.9 million payroll jobs over that period.

Today’s employment report provides further evidence that the economy is continuing to heal from the worst economic downturn since the Great Depression. It is critical that we continue the economic policies that are helping us dig our way out of the deep hole that was caused by the recession that began at the end of 2007, including measures to help the sectors that were most severely harmed by the bubble economy that misdirected investment and created too few durable jobs.

The monthly employment and unemployment numbers can be volatile, and employment estimates can be subject to substantial revision. Therefore, as the Administration always stresses, it is important not to read too much into any one monthly report; nevertheless, the trend in job market indicators over recent months is an encouraging sign. 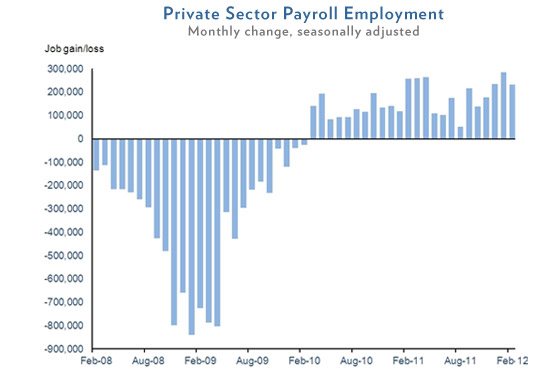