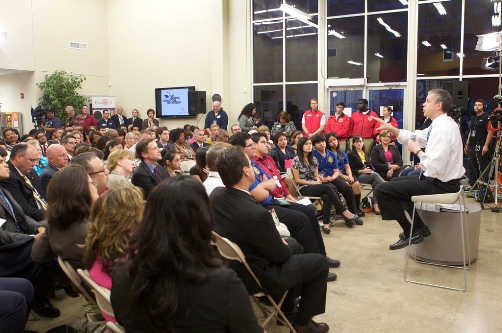 Ed. Note: The following is a cross-post that originally appeared on the Department of Education blog.

During the town hall, community leaders and educators discussed the importance of expanding opportunities for Hispanic students to meet President Obama’s education goals for the nation. Nearly 140 audience members, and over 500 online viewers participated as Secretary Duncan and Mayor Castro answered questions about local, regional and national efforts to improve college access, affordability, and persistence for all students.

Café College is part of San Antonio 2020, an effort created under Mayor Castro’s leadership, which seeks to improve early learning and higher education opportunities for all San Antonio residents by 2020.

Secretary Duncan also joined more than 400 community leaders and 28 senior Obama administration officials at the White House Hispanic Community Action Summit at Fox Tech High School. The summit brought together the community to identify issues of concern for Hispanics and develop solutions that would improve access to and quality of education.

Speaking at the Summit, Duncan noted that “the success of the Hispanic community, as with other communities, is largely dependent on educational attainment and on ensuring that barriers in the way of this objective are tackled head-on.”

The event was the 14th summit held by the White House office of Public Engagement and the White House Initiative on Educational Excellence for Hispanics. The summit series has engaged almost 5,000 leaders throughout the nation.

The event is part of a series of summits throughout the nation developed by the White House office of Public Engagement and the White House Initiative on Educational Excellence for Hispanics.

Watch the archived webcast of the town hall at: http://bit.ly/EdSAT.

David Terry is the Associate Director of the Information Resource Center at the Department of Education's Office of Communications and Outreach.