This past week, a group of twelve students ages 13-15 from the Elizabeth Garrett Anderson College (EGA) in Islington, London visited Washington during the UK Official visit.  EGA is an all-girls school with students ranging in ages from 11-17 where nearly 90% of the girls come from minority ethnic backgrounds and 2/3 speak English as a second language.  First Lady Michelle Obama visited EGA during her trip to London in 2009 and invited a group of EGA students to join her at Oxford University in 2011, as well as to visit the United States.  Their trip this week, which was focused on diplomacy, leadership and community, included a visit to the White House where they were joined by White House Mentees in attending a Women’s Leadership Panel in the State Dining Room. The panel was moderated by Sarah Hurwitz, Special Assistant to the President, Senior Advisor to the Council on Women and Girls and Senior Presidential Speechwriter, and featured four White House staffers – Deputy Assistant to the President and Director of Policy and Projects for the First Lady Jocelyn Frye, Deputy Assistant to the President for Economic Policy Danielle Gray, Secret Service Agent Leslie Pichon, and myself. 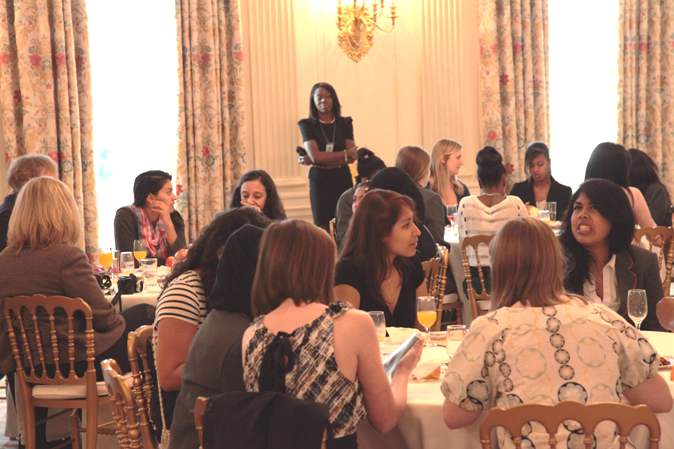 While we initially spoke a bit about our professional backgrounds and what our jobs entail at the White House, the afternoon took a more personal turn as we took questions from the students.  The girls wanted to know what kinds of obstacles we had overcome in our lives, if we ever felt insecure about our abilities or hesitant to share our opinions, and when we knew what we wanted to do in our careers.  We shared our personal experiences and admitted to doubts, confusion and hurdles along the way.  We all came from different backgrounds and experiences, parts of the country and perspectives, yet the common theme that came across from all the women on the panel was the importance of discovering your passion and having the courage to allow it to guide your path.

I imagine that I speak for the other panelists as well when I say that meeting these girls was a highlight of my experience at the White House.  My background likely has similarities to theirs, despite being an ocean apart, which was something I talked about.  I was raised in a Mexican immigrant household by a single mother and my family dealt with issues such as limited access to health care, unemployment, and immigration status, as well as struggling in general just to make ends meet.  Spanish was the primary language in my home during my childhood and dreams such as working in the White House didn’t seem anywhere near the realm of possibility.  I know how much it would have meant for me when I was their age to hear from women who came from similar experiences, faced comparable obstacles and overcame the statistics.

EGA’s motto is “learning without limits, achieve without limits and futures without limits.”  I believe that truly is the most important lesson to internalize as one dares to find the courage to dream big.  I hope in a small way, the girls were able to see themselves in us just as I was able to recognize myself in them.  And just as President Obama encourages young people everywhere to “dream big dreams,”  he is the example of the extraordinary places our dreams and our education can take us.