Standing Up for Safe Schools & Communities

Earlier today, Valerie Jarrett, Senior Advisor to the President, joined Attorney General Eric Holder in Arlington, Texas to deliver keynote remarks at the White House LGBT Conference on Safe Schools & Communities.  In speaking before an audience of over 400 teachers, students, parents, community advocates, law enforcement officers and officials, and elected officials, Valerie described the many important steps the Obama Administration has taken to ensure safety and security for all our young people – including LGBT students – in our schools and neighborhoods. 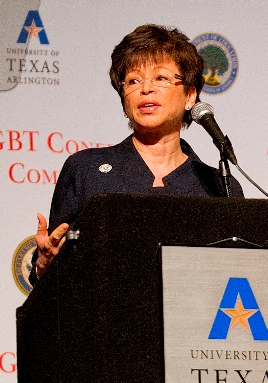 Below are her remarks as prepared for delivery:

I’m delighted to be joined here today by colleagues from across the Obama Administration, including my co-host, the Attorney General, Eric Holder. I’d like to thank President James Spaniolo, Dean Alejandro del Carmen, and the entire university, for opening your doors to us.

I also want to recognize all those who are working to make Dallas and Ft. Worth a leader in the fight against bullying. It is because of you that we are here today.  I know that you still face tremendous challenges as you implement new policies, and create an environment where those policies are fully embraced. But you’ve already made great progress, and I know that working together, there are even better days ahead.

Can all the students here today stand up as well? On behalf of the President and First Lady, I want to thank you for your courage, and your willingness to stand up for what is right. I think they deserve a big round of applause.

And finally, I’d like to thank Joel, not just for that very kind introduction, but also for his inspiring leadership. I remember watching the video of Joel at a Fort Worth City Council Meeting; Joel poignantly put a face on the children who have committed suicide, and then sent a message to children that it gets better based on an open description of his own childhood. It took so much courage to stand up, in public, and tell that powerful, painful, but ultimately, hopeful story.

Today, more than two and a half million people have seen Joel’s video, and that’s just on YouTube. I am certain that many of them were young people looking for some reassurance that they are not alone. Thanks to Joel and all the courageous men and women like him, there are more young people who understand that … It truly does get better.

Joel is one of many extraordinary leaders in the fight for a safer and better country who are here with us today. Judy Shepard is here. I had the honor of meeting Judy and Dennis for the first time, nearly three years ago, when they met with President Obama. He promised them that he would push for the passage of a hate crimes bill named after their son Matthew. And he kept that promise. Today, we are a better country because of the Matthew Shepard Hate Crimes Act. As the President said when he signed that bill, “No one in America should be forced to look over their shoulder because of who they are.”

All across our country, I have met so many parents who inspire me with their determination to turn grief into positive change.  Last year, I met a woman named Tammy Aaberg at the Human Rights Campaign’s Annual Gala. Fighting back tears, Tammy told me how her 15 year-old son Justin – a young man who Joel mentioned in his video – was bullied relentlessly in school for being gay. He seemed fine at home. In fact, Tammy said that Justin was always the one courageously standing up for others. She had no idea that he was being tormented in school. But his teachers knew he was being bullied, and they did not intervene, or even communicate to his parents about what was going on. Justin committed suicide in his room. His mother and younger sister discovered him; a devastating story that is all too familiar – we must do all we can to end this heartbreak.

Tammy has traveled across the country, re-living her tragic loss again and again to try to prevent other parents from enduring what she has had to endure. Although she lost her son, she’s fighting to keep all of our children safe. It’s people like Joel, Judy, and Tammy who inspire President Obama, who motivate him, and who make him determined that his Administration will do everything possible to fight for safe schools and safe communities for our children, students, friends, and neighbors.

President Obama is also committed to keeping the spotlight on this issue. That’s why Attorney General Holder and I both wanted to be here today.

In March of 2010, we held the first-ever White House Conference on Bullying Prevention, attended by both the President and First Lady. The conference brought together students, teachers, advocates, the private sector, and policymakers, to discuss ways to make our schools safer. President Obama explained it this way: “If there’s one goal of this conference, it’s to dispel the myth that bullying is just a harmless rite of passage or an inevitable part of growing up.  It’s not.”

The President recorded a video for the It Gets Better Project, and so did the Vice President, cabinet secretaries, and members of the White House Staff. It was particularly moving to hear from many of the LGBT Americans who work in the Obama Administration as they shared their own stories. I’m proud of them for doing all they can to reach out to young people in desperate need of someone who has walked in their shoes and thrived. Because young people should never feel alone.

Now, President Obama has also made it clear that it only gets better because we make it better. So in addition to raising awareness, the Obama Administration has taken historic steps to help prevent bullying in our schools.

We have issued guidance to schools, colleges, and universities, making it clear that existing civil rights laws apply to bullying. Schools have not just a moral responsibility, but a legal responsibility, to protect our young people from harassment.

We have also worked with states to help them in their own anti-bullying efforts. We recently released a report that documents key components of anti-bullying laws across all 50 states.  And we’ve issued guidance to Governors and state school officials, in order to help them incorporate the best practices for protecting students.

The Administration also supports the goals of the Student Non-Discrimination Act.  This legislation reflects a simple fact – that LGBT students have the same right as every other student to go to school in an environment free of discrimination and harassment.  And as the Elementary and Secondary Education Act is being considered, we look forward to working with Congress to ensure that all students are safe and healthy and can learn in environments free from discrimination, bullying and harassment.

You can find detailed descriptions of the work we’re doing, along with resources for young people, parents, and educators, at StopBullying.gov, the website which we launched last year. We redesigned the website just this week, so if you haven’t been there recently, you should take a look. We’re very proud of it.

We’re also tremendously pleased that we have so many partners – businesses, foundations, non-profits, and universities – who are coming up with new, creative ways to make our schools safe. Last month, Facebook launched a $200,000 “Digital Citizenship Research Grant,” which will reward people who come up with the most innovative new ways to use technology to prevent bullying. MTV and MIT are collaborating on an app that invites young people to share their stories online: over 9,000 people have already made submissions, making this one of the largest bodies of knowledge on how young people think about social media. Lady Gaga launched a foundation called Born This Way, dedicated to creating a kinder and braver world by fighting bullying.

And I recently watched a new movie called “Bully” with my mom. As moms, we were both deeply touched by the avoidable pain, agony and tragic loss portrayed in the film. Seeing it moved me deeply, and reminded me why we must redouble our efforts to end bullying now.

Every day, we are striving to do our part to make progress. And I believe that day by day, step by step, we will change not just our laws and policies, but behavior, so that every young person is able to thrive in school, without worrying about being bullied.

So in closing, I would share one more story from a leader who is here today. Because change doesn’t begin in Washington. Change happens because ordinary people do extraordinary things … people like Tempest Cartwright.

Tempest is from Broken Arrow, Oklahoma – she’s 18 years old. When word first got around her high school that she was gay, she lost friends. Some people stopped talking to her at church. Other students called her hurtful words that no young person should ever hear.

For a while, Tempest was depressed. But she refused to let bullies ruin her life. As she put it, “Their attitudes and assumptions need to change, not me. If I don’t help that along, who will?

So today, Tempest is the president of her school’s gay-straight alliance – an alliance that has more than quadrupled its membership since she became involved. It’s not easy. In fact, it is hard. When her organization places posters around the school, they often get torn down. But she and other members keep putting them right back up.  And every day, bit by bit, she changes the world around her.

As she put it, “When people put me down, it inspires me to stand up.”

Well, young people like Tempest should inspire us all to stand up, and keep standing up, for what is right. To stand up for the safety of our children and neighbors. To stand up for the belief that in America, no one should face bullying, harassment, or violence because of who they are, because that’s not who we are.

So together, let’s send a message of hope to our country’s young people. Let’s make sure they know that, to quote Joel’s moving video, “Attitudes will change. Life will get better. You will have a lifetime of happy memories, if you just allow yourself, and give yourself the time, to make them.”

That’s our goal. I know there are tough days, days when it’s easy to lose heart, days when change isn’t happening fast enough. But I urge you not to rest, not to tire, and certainly not to give up. Because our young people are counting on us. Know that the President of the United States is in your corner, and we will be with you every step of the way.