March 20, 2012 at 7:25 PM ET by Kori Schulman
Twitter Facebook Email
Summary:
Over 140 "tweeps" from across the country welcomed Prime Minister David Cameron, and then met with Administration officials to talk about opening the government through online engagement.

The White House reached out to its more than 2.7 million Twitter followers and invited them to welcome UK Prime Minister David Cameron to the White House on March 14, 2012. This “Tweetup” was one in a series of events that invite those who engage with the White House online to attend in-person events. Over 140 people participated in the Tweetup, representing 23 states, from as far away as California and Texas.

The group began their day on the sunny South Lawn, where they watched the Arrival Ceremony and tweeted updates and pictures about their experience throughout. From bilateral politics to fashion – the Tweetup attendees shared their unique perspectives in real time. 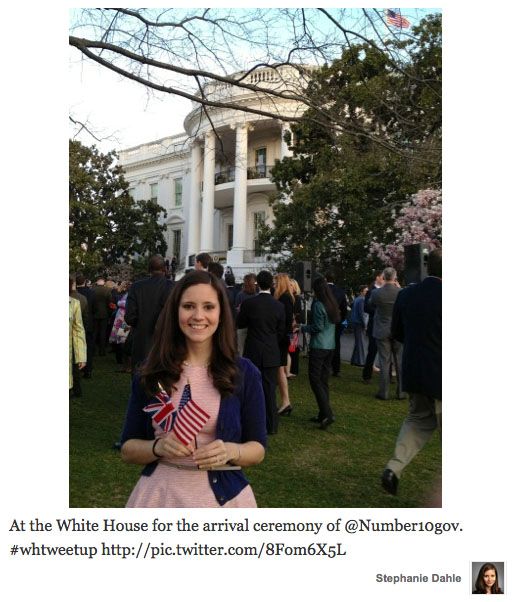 White House tweetup attendee @StephanieDahle poses for a twitter picture at the UK Arrival Ceremony on the South Lawn of the White House. March 14, 2012. (by Stephanie Dahle)

After the White House Arrival Ceremony concluded, attendees engaged in a briefing with Administration officials to discuss online engagement. The group asked their questions and also relayed questions submitted by their Twitter followers, enabling thousands of people across the country to virtually participate in the conversation.

Dan Pfeiffer, Director of Communications for the White House, kicked off the briefing and explained how media is evolving to embrace social platforms. Next, the US-UK relationship was exemplified through a joint presentation by Caitlin Hayden, Deputy National Security Council Spokesperson, and James Barbour, Press Secretary for the British Embassy. Brian Deese, Macon Phillips, and Jon Carson also spoke with the group.

The social media-savvy attendees did not just leave their mark on Twitter – many guests blogged about their experience and spoke to news outlets from their hometowns. Joy Cook was featured on My Fox8, her local news channel in Greensboro, North Carolina, and Police Lieutenant Dan Fink, who tweets updates for the San Rafael Police Department, spoke to the Marin Independent Journal. Kia Morgan Smith wrote about her experience at her blog The Cinco Blog telling readers, "I don’t know how you sum up AMAZING." "After being at the White House," Amy Lynn Smith wrote on her blog, "I’m more convinced than ever of the power of the people."

The Storify of the #WHTweetup, below, was created to capture the experience through Tweets, photographs, and video. Stay tuned, as we will be sure to post updates about the next Tweetup opportunity on WhiteHouse.gov and @WhiteHouse.