March 26, 2012 at 9:32 AM ET by Colleen Curtis
Twitter Facebook Email
Summary:
The U.S. Embassy in Seoul held a competition asking South Koreans to submit questions via social media for President Obama. The top three most interesting questions received written responses from President Obama and you can read them here. 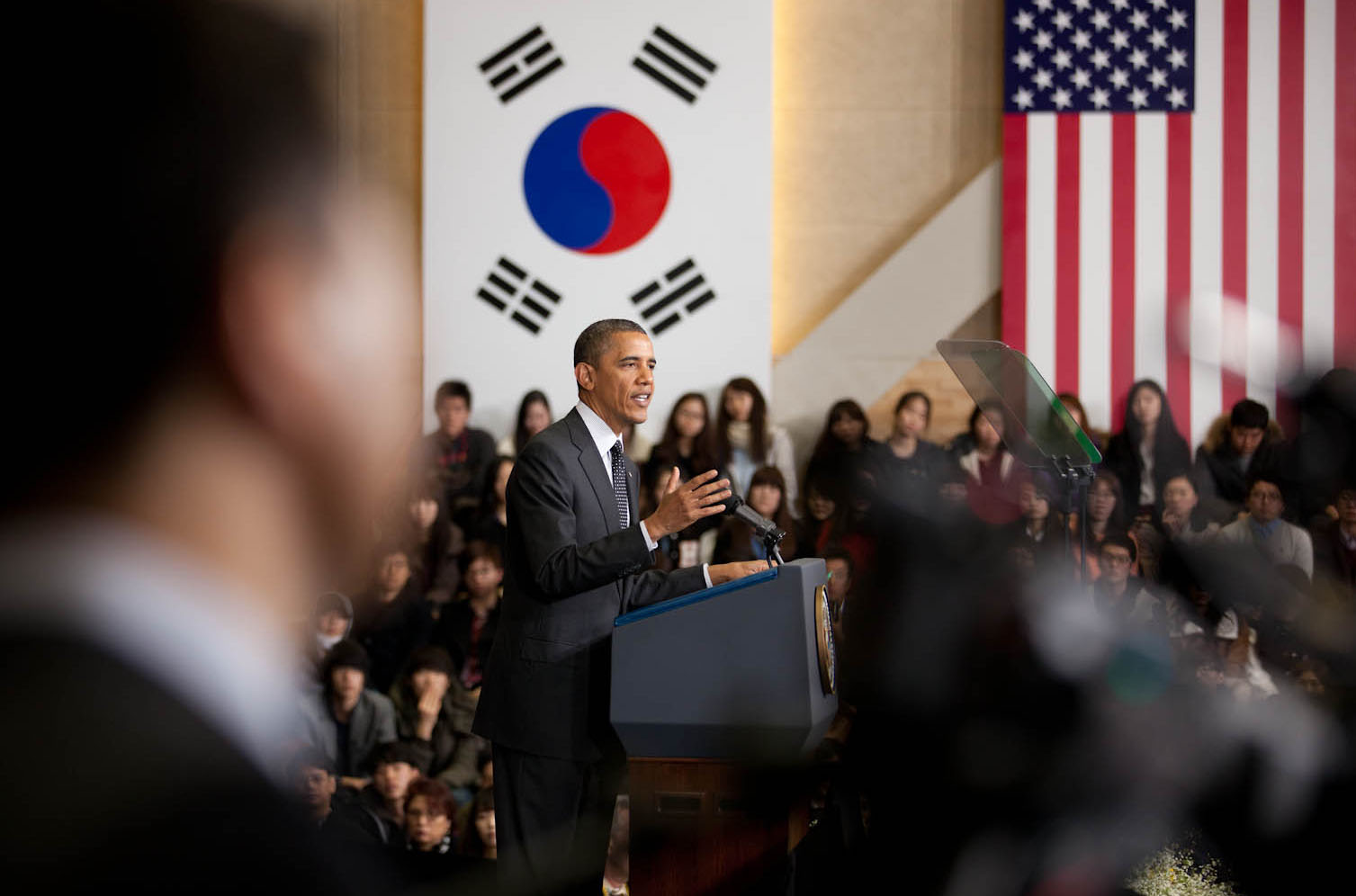 The U.S. Embassy in Seoul held a competition inviting South Koreans to submit questions via social media for President Obama. The top three most interesting questions received written responses from President Obama – those questions, and the President’s answers, are below.

Yoo-il Lee, CEO of a Korean trade company: WHAT IS KOREA TO YOU?

You mentioned Korea more often than any other countries in your official speeches. It is not easy for the citizens of the Republic of Korea to accurately look back at themselves. At the same time, I feel proud whenever you mention Korea in your speeches. At the beginning of a new year, many Koreans wonder how many times you will mention Korea throughout the year. To you, what is Korea that you mention it so often in your official speeches? What are your thoughts on the Korean people?

I mention the Republic of Korea often in my speeches because it is both a strong ally for the United States, and an extraordinary example to the world. Because our two countries have stood together, the people of South Korea were able to build a democratic and economic miracle out of the ruins of war. And today, the Republic of Korea is more than an ally of the United States – it is one of our largest trading partners, which supports prosperity on both sides of the Pacific.

The Republic of Korea sets a powerful example to the world in how to build a strong and thriving democracy, while standing up for freedom and security on the Korean peninsula and beyond. Our two countries have fought together in war, and stood together in peace, and now we coordinate closely on a range of issues – from nuclear security and non-proliferation, to our efforts in Afghanistan and Haiti, to our work supporting development and humanitarian assistance around the globe. And in the face of unprovoked attacks on your citizens, South Koreans have shown great strength and resilience.

Korea’s success is a tribute to the sacrifices and tenacity of the Korean people. You show what can be achieved when people come together, educate their children, stand up for their values, and pursue a positive vision for their country. I think the Korean story is an important one, and that’s why I will continue to speak about it.

Bo-yeon Suh, University Student asks AMONGST ALL THE PUBLIC SPEECHES YOU’VE DELIVERED, WHAT IS YOUR FAVORITE SPEECH?

Welcome to Korea. Your speeches are the best materials for students like me who major in English. Every word in your speeches is so refined that some of my friends memorize your speeches. The most memorable speech for me is the Prague speech on a nuclear-free world in April 2009 in which you mentioned the importance of nuclear security that will be addressed during the Nuclear Security Summit. What is the most special speech for you? Thank you again for visiting our country to promote world peace.

Thank you for your kind words about my speeches. It is hard for me to choose one favorite, because I’ve given speeches on so many different topics. I do think that one important message that I’ve tried to carry through many of my speeches is the notion that people can come together to overcome difficult challenges.

This message of unity has been central to my most important speeches. A speech that I gave to the Democratic National Convention in 2004 focused on the fact that what unites the American people is far stronger than the issues that divide us. A speech that I gave on race relations in 2008 addressed how we must understand our own difficult history, while also bridging our racial and ethnic divisions. And a speech that I gave in Oslo after receiving the Nobel Peace Prize spoke about how people and nations from across the world have a responsibility to understand the causes of war, and to work for a just and lasting peace that makes life worth living.

The Prague speech that you mentioned also makes it clear that while the dangers of nuclear weapons are extraordinary, we can come together to harness the power of nuclear energy for peace – not war. That’s what the Summit starting tonight is all about: an effort to secure nuclear materials so that they never fall into the wrong hands, and so that we can benefit from peaceful nuclear power. And that’s what is important in speeches – to remind people that we can overcome our divisions, and draw on peoples’ hopes and the things that unite us as human beings.

Mr. President, I am a North Korea refugee. As a person from North Korea, I would like to ask what should be done to draw more attention to the North Korean human rights issues in the international community, and what the top priority is in resolving North Korea issues.

The United States remains deeply concerned about the well-being of the North Korean people, the human rights situation in the DPRK and the plight of North Korean refugees. Your personal story of courage is remarkable and a testament to the possibility for North Koreans to lead lives in freedom and dignity.

The United States has led efforts around the globe to call attention to the human rights situation in North Korea.  Improving human rights conditions is a top U.S. priority in our North Korea policy and it will have a significant impact on the prospect for closer U.S.-DPRK ties.

In the last year, the United States Special Envoy for North Korean Human Rights Issues, Ambassador Robert King, traveled to Pyongyang and for the first time engaged directly with the North Korean government on human rights issues. We emphasized our concerns about North Korean human rights in all three of our recent bilateral meetings with the DPRK.

We will continue to support programs to increase freedom of information, promote human rights and rule of law, and lay the foundation for civil society in the DPRK.  Meanwhile, the extraordinary progress that the Republic of Korea has accomplished in broadening prosperity and democracy for its citizens stands as a powerful contrast to the challenges in the North.