March 26, 2012 at 4:12 PM ET by Phil Duffy and Becky Fried
Twitter Facebook Email
Summary:
New data released last week by the National Oceanic and Atmospheric Administration (NOAA) showed that the 2011-2012 winter season was the fourth warmest ever recorded in the United States.

New data released last week by the National Oceanic and Atmospheric Administration (NOAA) showed that the 2011-2012 winter season was the fourth warmest ever recorded in the United States.

The data were published in NOAA’s National Climatic Data Center State of the Climate report, which provides regularly updated climate and weather information for regions across the United States.

The data show that this past winter was generally both warmer than average and drier than average for the lower 48 States. The average temperature across these states for December through February was 36.8 degrees F, nearly 4 degrees higher than the long-term average for U.S. winters from 1901 – 2000. Precipitation was down 12 percent on average, and when it came to snow, the United States experienced its third smallest winter snow-cover footprint—square miles of snow-cover, as measured by satellites—since recording began 46 years ago.

More than half of the United States experienced winters that ranked in their top 10 warmest winters ever recorded.

In addition to temperature and precipitation data, NOAA collects and publishes information on extreme weather events across the country. This information is communicated using NOAA’s U.S. Climate Extremes Index, an index that tracks the frequency of extreme climate indicators such as very high or low temperatures, droughts, and tropical cyclones across the United States during a given period. The Climate Extremes Index this winter ranked ninth highest among since recording began more than a century ago.

After all, it’s impossible to say with certainty that cigarette smoking was the cause of any individual smoker’s lung cancer, since a minority of cases do have other causes. But given the overwhelming evidence that tobacco use increases risks for many types of cancer—that, in fact,  cigarette smoking is the No. 1 risk factor for lung cancer—it makes sense to support smoking cessation programs.

In the same way, no one can say why this past winter was as warm as it was. But scientists around the world have concluded overwhelmingly that modern climate change trends are primarily attributable to human activities. So doesn’t it make sense to kick some of our most egregious energy habits before the prognosis gets even more dire? 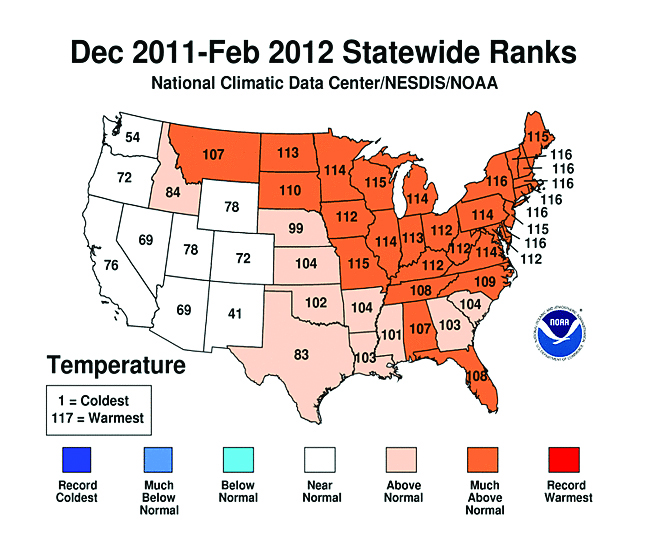 State-by-state information on winter 2011-2012 temperatures is represented above. Redder colors indicate states in which this winter was relatively warm compared to previous winters; white indicates states in which this winter was near-normal. No state had below-normal temperatures. Numbers indicate state-by-state rankings of winter 2011-2012 temperatures within the 117-year NOAA temperature dataset for each state; 117 would indicate the warmest winter on record; 1 would indicate the coldest winter on record. (Graphic courtesy NOAA)