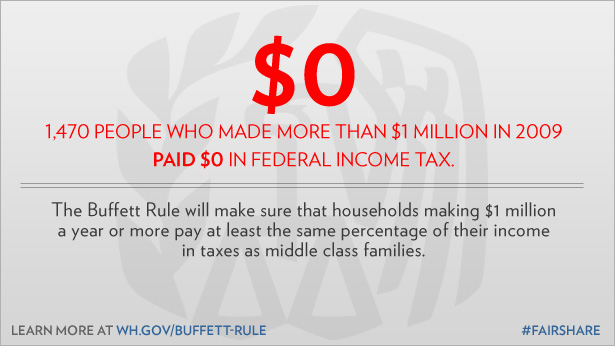 In 2009, 1,470 people who made more than $1 million paid $0 in federal income tax. That means that while millions of middle class families paid their fair share in taxes that year—money that went to funding things like education, our military, and health care for seniors—a  small group of high-income Americans paid nothing at all.

And, in addition to the small group of very wealthy who paid no taxes, thousands of other households with incomes of $1 million or more paid a lower percentage of their incomes in taxes than middle class families paid that year. Warren Buffett, for example, pays a lower effective tax rate than his secretary, and that’s not fair.

President Obama believes in building an economy where everyone gets a fair shot, everyone does their fair share, and everyone plays by the same set of rules. That’s why he proposed the Buffett Rule.

The Buffett Rule is simple: if you make more than $1 million a year, you should pay at least the same percentage of your income in taxes as middle class families do. On the other hand, if you make under $250,000 a year – like 98 percent of American families do – your taxes shouldn’t go up.