Let All Who Are Hungry Come and Eat: A Food and Justice Seder at USDA 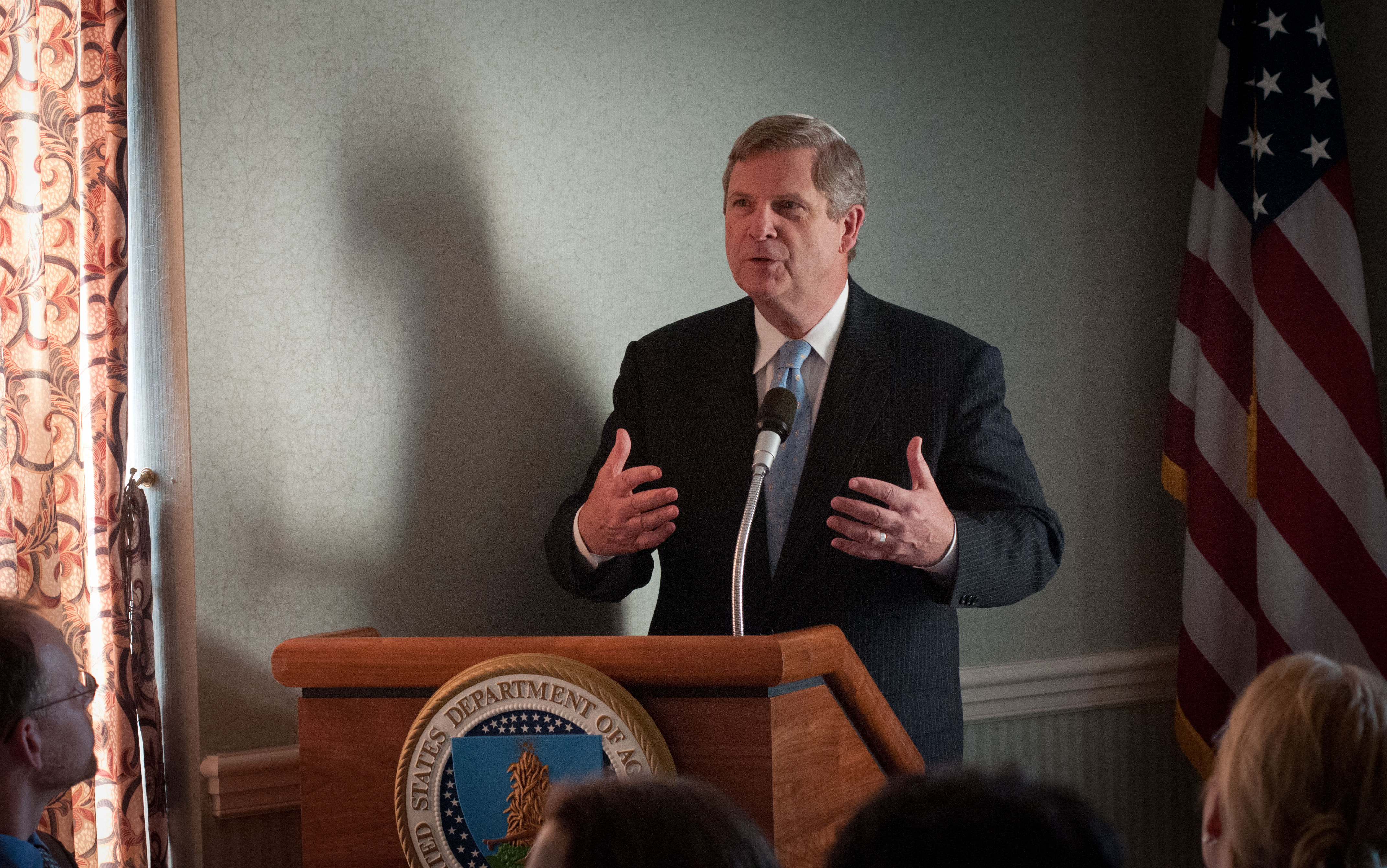 Just ahead of the official start of Passover this Friday at sunset, the U.S. Department of Agriculture hosted its second Food and Justice Passover Seder. The traditional Jewish seder commemorates the Passover holiday and the Exodus of the Israelites from Egypt. USDA’s symbolic seder, held in partnership with Bend the Arc: A Jewish Partnership for Justice, highlighted the intersection of food and justice issues in the modern world.  This year’s event centered on the themes of hunger, access to healthy food, sustainable food production, and fair treatment for farm workers.

Agriculture Secretary Tom Vilsack provided opening thoughts about the evening, mentioning the ‘Golden Rule’ which has its roots in the book of Leviticus.  “Seder means ‘order.’ To take one meaning of the word – to command – I think we can look at the ‘Golden Rule’ as an order. If I were hungry, there is nothing that would be more important to me than to have others work to make sure I could eat. We try to put that into practice through our work here at USDA.”

“This is another example of how the Obama Administration is engaging various partners on a wide range of issues.  The issues of food and justice are a priority – from the First Lady’s Let’s Move! campaign for kids to the President’s strong support for providing families in need a bridge to opportunity through the Supplemental Nutrition Assistance Program,” stated Jon Carson, Director of the White House Office of Public Engagement.

Rabbi Sydney Mintz of California and Rabbi Jack Moline of Virginia led the service, which brought together guests from the non-profit and Jewish communities, as well as USDA and Administration officials. The first part of the event was titled “The bread of poverty,” and focused on hunger and food security.  Representatives from MAZON: A Jewish Response to Hunger and the Jewish Council for Public Affairs connected the ancient Israelites’ experience of hunger to the modern-day food insecurity faced by nearly 49 million Americans who struggle to put enough food on the table at some point during the year.  USDA’s nutrition assistance programs – the Supplemental Nutrition Assistance Program, National School Lunch Program and others – serve one in four Americans.  Seder participants renewed their commitment to ensuring that everyone has access to the nutritious food they need to lead healthy lives. 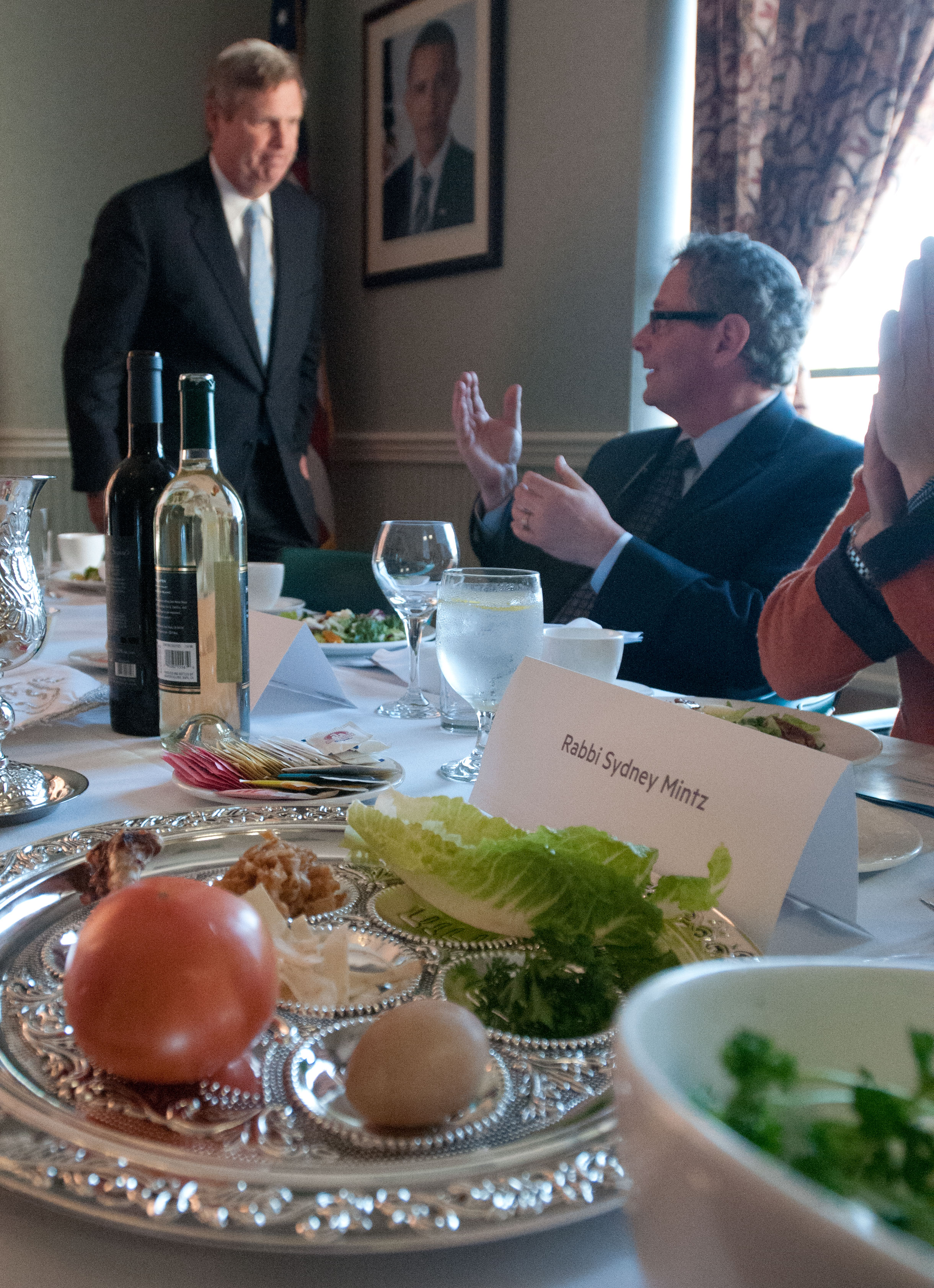 Agriculture Secretary Tom Vilsack receives applause as he concludes his talk during the Food and Justice Passover Seder at the U.S. Department of Agriculture in Washington, D.C., April 4, 2012. (Photo courtesy of Lance Cheung, USDA)

The second part of the seder connected the Israelites’ experience with slavery to modern struggles of farm workers and others in the food industry.  Rabbis for Human Rights – North America shared their experiences working to fight human trafficking and slavery in the United States, realities faced by some people working to bring food to our tables.  The third portion, “Our cups are not full,” connected the 10 plagues visited upon the Egyptians to the struggles affecting our communities today. The blessing was led by Magen Tzedek, an organization that certifies kosher food to standards that meet or exceed best practices for the treatment of workers, animals, and the environment.

The final element of the program was “L’Shana HaBa: Next year.” This closing focused on what we hope for in the coming year, and envisioning a better world. The final blessing was given by Alan van Capelle, Executive Director of Bend the Arc, “We are urged to think of ourselves as experiencing and embodying liberation at the seder.  As we envision the coming year, we commit to efforts that bring us closer to the world as it should be.”

Max Finberg is Director of the Office of Faith Based and Community Initiatives at the Department of Agriculture.