April 6, 2012 at 9:30 AM ET by Alan Krueger, Alan B. Krueger
Twitter Facebook Email
Summary:
Overall payroll employment rose by 121,000 jobs in March and the economy has added private sector jobs for 25 straight months.

There is more work to be done, but today’s employment report provides further evidence that the economy is continuing to recover from the worst economic downturn since the Great Depression. It is critical that we continue to make smart investments that strengthen our economy and lay a foundation for long-term middle class job growth so we can continue to dig our way out of the deep hole that was caused by the severe recession that began at the end of 2007.

Both surveys indicate the continuing challenges facing construction workers, as a result of the collapse in homebuilding following the bursting of the housing bubble.  The unemployment rate for construction workers stands at 17.2%, more than double the national average.  Because of weak private sector demand for construction investment and the nation’s continuing need for improved infrastructure, including maintenance of existing highways, bridges, and ports, the President’s Budget proposal to increase and modernize the nation’s infrastructure is well targeted to support the economy today and in the future.

Despite adverse shocks that have created headwinds for economic growth, including weak construction investment, the economy has added private sector jobs for 25 straight months, for a total of 4.1 million jobs over that period.

As the Administration stresses every month, the monthly employment and unemployment figures can be volatile, and employment estimates can be subject to substantial revision. Therefore, it is important not to read too much into any one monthly report, and it is helpful to consider each report in the context of other data that are becoming available. 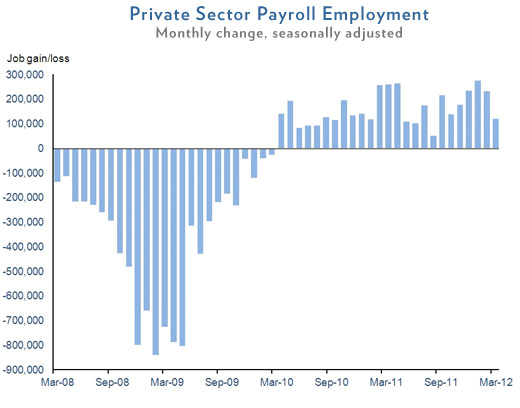