White House Forum on Women and the Economy 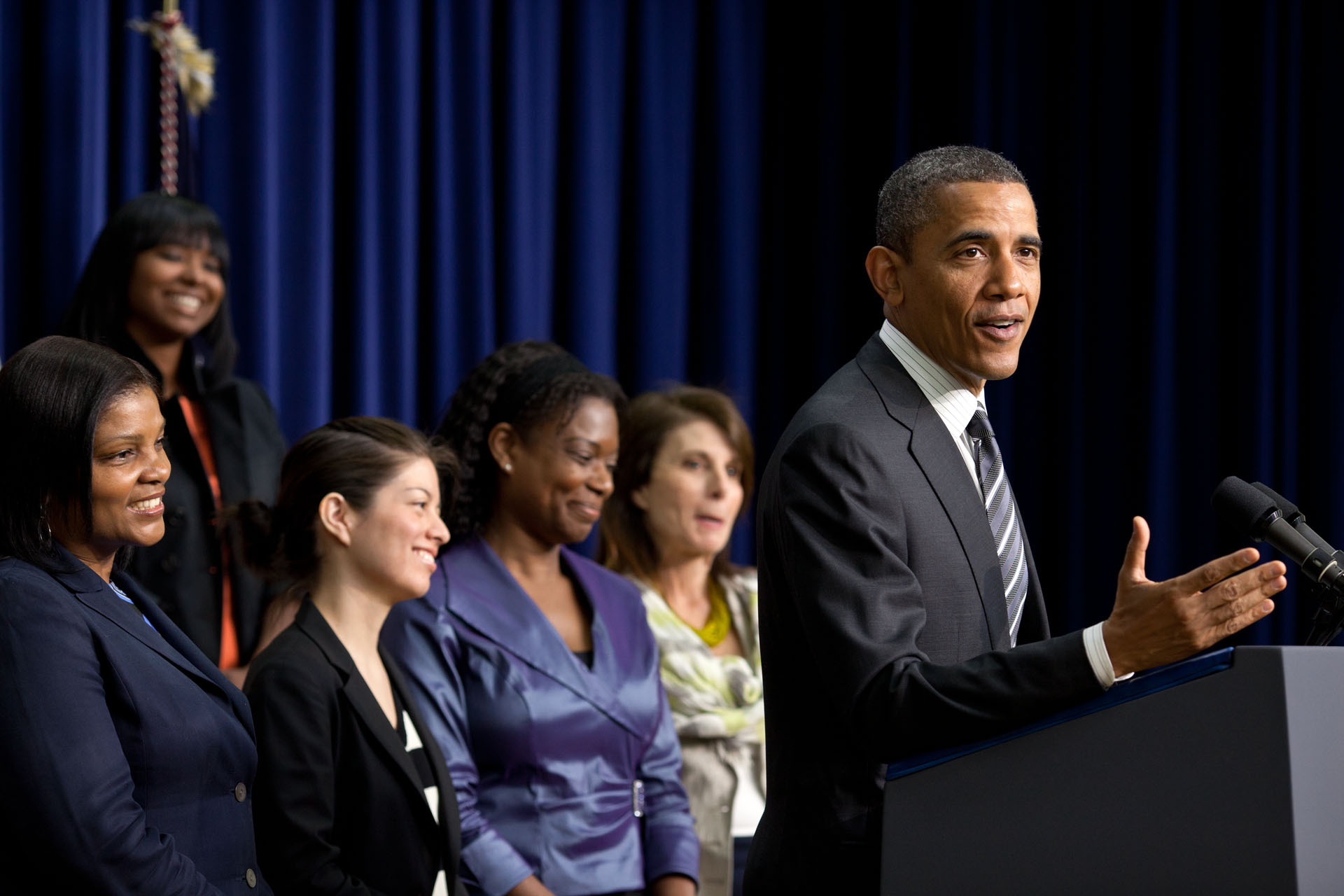 This morning, I had the privilege of attending the White House Forum on Women and the Economy. We hosted nearly 200 women from all over the country to join in a conversation about the critical role that women play in driving our economic progress. We also released a report that details a wide range of policies, programs, and legislative initiatives under the Obama Administration that are supporting women and girls at all stages of their lives and careers. President Obama also attended the forum, and he said, “When it comes to our efforts on behalf of women and girls, I’m proud of the accomplishments we can point to. Yes, we’ve got more to do.  But there’s no doubt we have begun to make progress.” I am also proud of our accomplishments and look forward to continuing the important work we are doing to promote the interests of women and girls across the country and around the world.

My remarks, as prepared for delivery, are below.

It is my pleasure to welcome you to our White House Forum on Women and the Economy.  I am delighted to see so many familiar faces in the audience. We have an extraordinary array of accomplished women and a few good and brave men. You represent a wide range of stakeholders from all across our country.  You are the trailblazers and innovators that drive our country, and you have the insight and vision that we need to create an economy that’s built to last. A number of you have worked closely with us throughout the last few years and deserve a lot of credit for many of our accomplishments. I’d also like to thank members of the President’s Cabinet for joining us today, and for your exceptional service. And finally, welcome to those of you who are watching online. We will stream today’s whole forum, including breakout sessions.

I am so proud to be the chair of the White House Council on Women and Girls and to join Tina in leading this important initiative.

When President Obama created the Council in early 2009, he said, and I quote, “It is up to us to ensure that our daughters and grand-daughters have no limits on their dreams, and no obstacles to their achievements.” His executive order ensured that the Council would include representatives of every single government agency. A first for any president. I’d like to ask all of the members of the Council who are here to stand and be recognized.

By creating the White House Council on Women and Girls, the President set a tone from the top ensuring that the advancement of women and girls is a top priority of his administration. At the same time, President Obama has taken historic steps to appoint more women to the highest levels of public service, reflecting the diversity of this country. Not only has he appointed women to key positions, but also empowered them to drive critical policy, promoting the interests of women and girls both at home and abroad.

You will hear during today’s forum how these policies have significantly improved the lives of women and girls and helped grow our economy.

Now, we all understand that so-called “women’s issues” do not only affect women. Women make up a majority of students in our colleges and an even larger percentage in graduates schools, are nearly half of the workforce, and are breadwinners for a growing number of families. So, it is clear that the success of American women is critical to the success and sustainability of our families, communities, and the national economy. However, challenges still remain. For example, women still only earn 77 cents on the dollar compared to men. And women of color face an even larger discrepancy.

Today, we are releasing a report that illustrates the Obama Administration’s commitment to tearing down barriers that women face in the workplace, and the marketplace, in order to drive America forward. And for those of you watching online, you can find the report at whitehouse.gov

The Obama Administration has helped create more security and opportunity for American women at every stage of their lives and careers, beginning with our girls. For example, the President’s innovative Race to the Top competition rewards schools that take steps to close the gap between girls and boys in classes that prepare them for careers in science, technology, engineering, and math, “STEM,” as we call it.

It was such a pleasure for me to visit a Council of Women and Girls event at NASA and see local high school girls exposed to the magic of space exploration. And to be with the President when he welcomed into the Oval Office the three winners of the International Google Science Fair competition, all American girls. We are determined to help girls discover and develop their passion for careers in STEM fields.

Because of President Obama’s leadership, millions more female students can afford to go to college thanks to increased funding for Pell Grants. The President’s commitment to funding community colleges is helping so many women secure the training they need for high-skill jobs of the future. And women in their early twenties, including my own daughter for a few months, are able to receive coverage under their parents’ health insurance plans because of the Affordable Care Act.

President Obama has also taken critical steps to help working women, whether they are fighting for equal pay or flexibility in the workplace, starting a new business, seeking protection at home, or staying healthy, which includes receiving preventive care, and, yes, contraception. And, for seniors, help with the cost of prescription drugs and strengthening Medicare and Social Security.

I’ll close by sharing the story of Jackie Bray, of North Carolina. I met Jackie when the First Lady invited her to watch the President’s State of the Union Address in January. Jackie is a single mom, and she was laid off from her job a year ago. But because of her ambition and determination, she enrolled at community college and mastered new skills like laser training and robotics. She successfully landed a job as a machine operator. After attending the President’s speech, Jackie said, and I quote, “"I'm just a girl who had a really big dream to work for the most amazing company on the planet, and I'm living that dream every day, and I can't explain how much it means to me.”

Jackie’s story reminds us why our work is so important. We know that there is still a lot to be done, and women will be a critical part of driving the country forward. This morning, we will highlight how the Obama Administration has improved the economic security of women and their families. And we will chart our course for the hard work that remains ahead of us.

Now, it’s my pleasure to introduce, first, the moderator of this morning’s panel. As I’m sure you know, Mika Brzezinski is a co-host of MSNBC’s Morning Joe. [She keeps me calm each morning while Joe tries so hard to raise my blood pressure.] Mika’s recent book, Knowing Your Value, is a must-read for women in the workplace. She is an outstanding role model, helping women stand up for themselves and recognize their own contributions. Please welcome Mika.

Joining Mika are some of the most impassioned advocates for America’s working women. Joe Echaverria, the CEO of DeLoitte, which is one of the corporate leaders in creating women-friendly workplaces. Karen Mills, the President’s Small Business Administrator, who is celebrating her third anniversary with the Administration today. Gene Sperling, the Director of the President’s National Economic Council who helped launch 10,000 Women at Goldman Sachs. And Ceci Rouse, Princeton economist and former member of the President’s Council of Economic Advisors. Thank you all for joining us this morning.

Valerie Jarrett is a Senior Advisor to President Barack Obama. She is also the Chair of the White House Council on Women and Girls