April 13, 2012 at 9:00 AM ET by Katharine Abraham and Jason Furman
Twitter Facebook Email
Summary:
While the previous Administration’s policies were tilted towards the wealthiest Americans, President Obama has been focused on the middle class and those working to get into the middle class

“This is a make-or-break moment for the middle class, and for all those who are fighting to get into the middle class. Because what’s at stake is whether this will be a country where working people can earn enough to raise a family, build a modest savings, own a home, secure their retirement.” -- Remarks by the President on the Economy in Osawatomie, Kansas, December 6, 2011

The President has been focused on working to ensure an America that grows together, rather than one in which the gains go disproportionately to the wealthy. His policies have already made a real contribution to achieving this ideal—benefiting millions of people, principally middle-class Americans and those struggling to get into the middle class—and he continues to push tirelessly for policies, including the Buffett Rule, that will help us get closer. 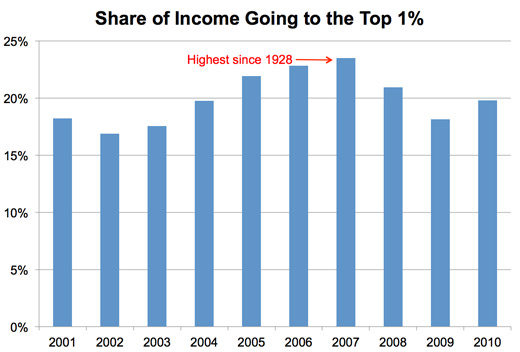 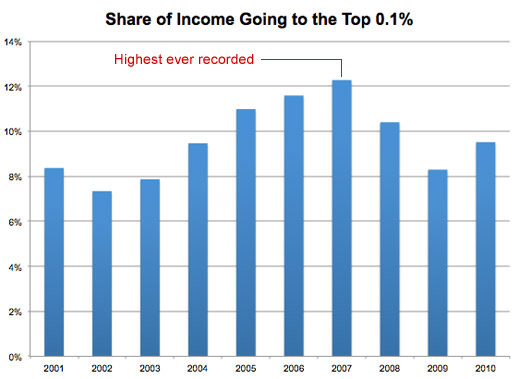 It is difficult to evaluate changes in inequality over very short periods of time, especially when these coincide with a deep recession and dramatic fluctuations in equity prices. But there is no basis in the data for claiming that inequality under President Obama is greater than the historic levels reached under President Bush. Any suggestion to the contrary is based on a combination of ignoring the most obvious facts and treating the dramatic recovery of the stock market in 2009 and 2010 as if it tells a deeper structural story about the economy.

Regardless of what the data show about short-term fluctuations in inequality, what really matters is what you do about it. President Bush focused on tax cuts tilted towards the wealthiest Americans, policies to which the Republicans would like to return. In contrast, since his first day in office, President Obama has been focused on policies that promote shared growth and help the middle-class and those struggling to get into it. Below are just a few notable examples: