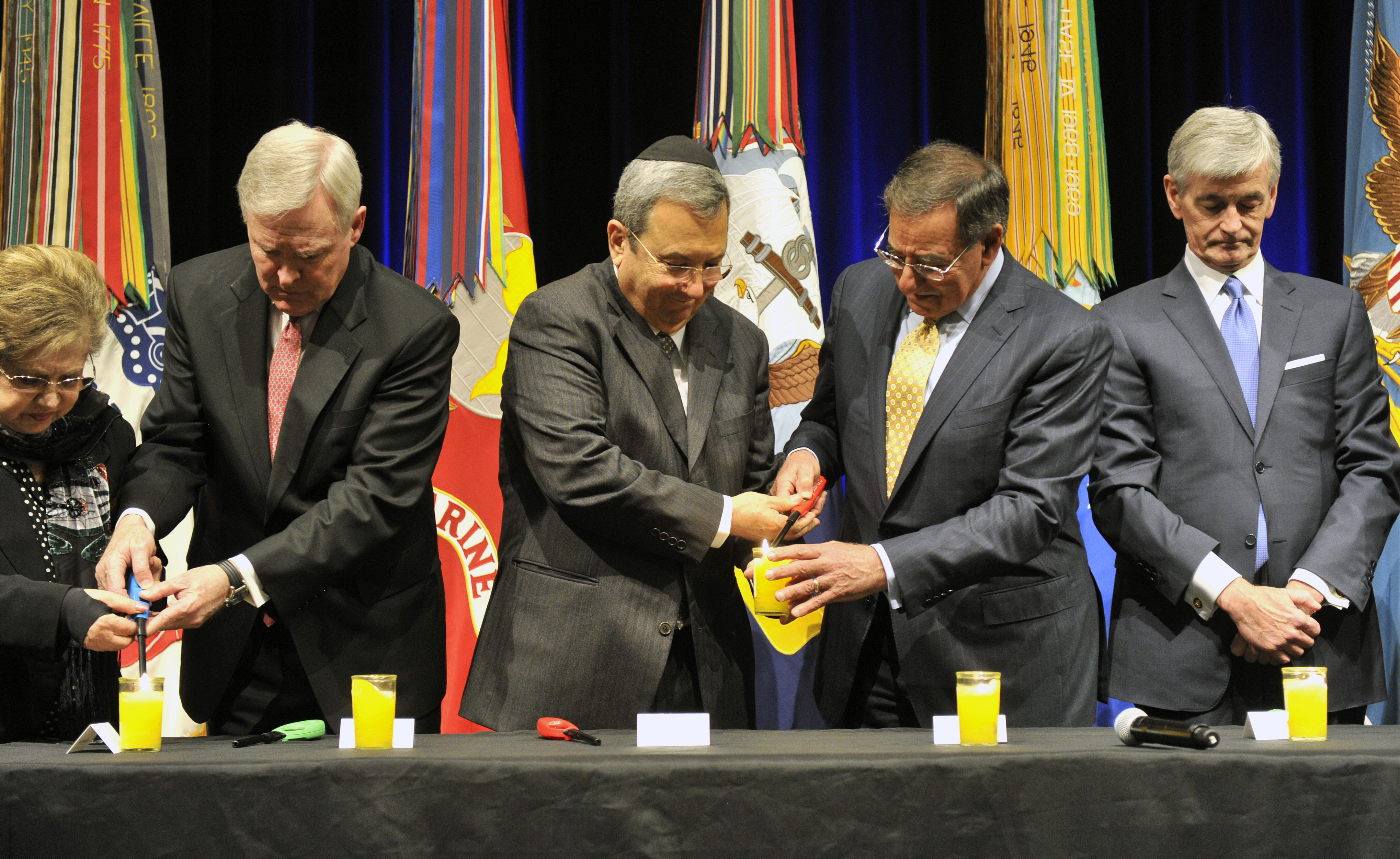 Yesterday, Secretary of Defense Leon Panetta joined Israel's Defense Minister Ehud Barak in commemorating the victims and survivors of the Holocaust at an event marking Yom HaShoah. The Secretary's remarks are below.

We also honor those who survived, who endured unimaginable pain and suffering.  They saw their family; mothers, fathers, brothers, sisters, other family members and friends taken from them.  They bore witness to evil and to tragedy, but in their strength we all find inspiration to fight against the intolerance and indifference that allowed this to happen.

Today we also celebrate the enduring strength of the Jewish people, who overcame this tragedy and built a strong and vibrant Jewish state in Israel.  They have flourished there, they have flourished here in America, and indeed across the world, and that too is an inspiration to all of us.

I just had the opportunity to meet with my friend Ehud Barak, and we are deeply honored that he was able to join us here today in this observance.  Ehud, thank you for changing your schedule so that you could be here with us, we understand that you have tight schedule and that you’ll have to depart a little early today.

Ehud has helped build and strengthen the state of Israel, rising to be a highly decorated soldier, Prime Minister, and now Defense Minister.

It is an honor for me to be able to participate in this event with all of you.  Today the world comes together to mark Yom Ha’Shoah – Holocaust Remembrance Day.

It was my privilege to have served in the U.S. House of Representatives when we passed a law recognizing the days surrounding Yom Ha’Shoah as a national civic commemoration, a law that also established the United States Holocaust Memorial Museum.

That solemn responsibility is shared by us as human beings, by us as Americans, and by us as men and women of the Department of Defense, who could be asked, when the time comes, to act, to make sure that it never happens again.

For the United States Armed Services, these events are not a distant memory.  Our modern military was forged in the crucible of World War II.  It was forged in the fight against Nazi tyranny.  To defeat Hitler we mobilized all of the strength that we could muster, and in that effort we witnessed many of our finest hours as a military and indeed, as a country.

Today we carry forward the proud legacy of men and women of the United States Army who played a vital role in liberating the camps at Buchenwald, Dora-Mittelbau, Flossenbürg, Dachau, and Mauthausen.

American forces not only brought freedom to the survivors of Nazi horrors, they also made sure that in its aftermath the world would know what had happened.

In the days after Allied forces captured the first concentration camps, General Eisenhower, General Patton and General Bradley themselves inspected a camp, and learned and saw atrocities that had occurred.  They were, in Eisenhower’s words, atrocities “beyond the American mind to comprehend.”

Eisenhower ordered every American soldier in the area who was not on the front lines to take the time to tour these camps, so that they could themselves see what they were fighting against, and why they were fighting.  These soldiers became not only liberators, but witnesses to one of the greatest atrocities in history.

The commitment of our forces to the survivors of Nazi atrocities did not end with liberation.  In the aftermath of war, we cared for survivors and we helped reunite families.  We provided physical nourishment, and we provided spiritual nourishment as well.

For example, upon learning that there was not a single complete edition of the Talmud in Germany, General Joseph McNarney, commander of the American zone of Occupied Germany, undertook an effort to print a Talmud for survivors.

And when American forces discovered enormous caches of looted cultural materials, they set about ensuring that these objects were treated with the greatest respect.

Ultimately, thanks to these efforts, millions of objects and sacred texts were returned to their rightful heirs or held in trust by Jewish successor organizations.

The leader of that effort, a U.S. Army Captain named Seymour Pomrenze, was a hero whose actions embodied the professionalism and dedication of the uniform he wore.

The contributions of American service members like Captain Pomrenze make all of us proud, and we remember them as we come together as a community today to mark Holocaust Remembrance Day.

Though we will always know what good was done and that lives were saved, we must always remember that we were unable to save the six million Jews who perished under Hitler’s cruel reign.

Today we renew that commitment.  That is what this day is truly all about.  We do so by coming together to bear witness, just as our service members did more than sixty-five years ago.  In a moment, we will be privileged to hear from Charlene Schiff, who has dedicated her life to making sure that the lives of those who perished in the Holocaust are never forgotten.

Out of the darkness that was the Holocaust comes the eternal hope that never again, never again, will we allow that to happen.  I would now like to invite Minister Barak and the Service Secretaries to join me and Charlene in lighting memorial candles.

These candles symbolize unity and hope, and our shared commitment to honor the memory of all those who perished in the Holocaust.

Jarrod Bernstein is the Director of Jewish Outreach in the Office of Public Engagement.