April 19, 2012 at 10:07 AM ET by Alan Samuels
Twitter Facebook Email
Summary:
Lt. Col. Alan Samuels works to bring renewable energy technologies into an everyday scope for the miliary -- and aid the missions of our servicemen and women. 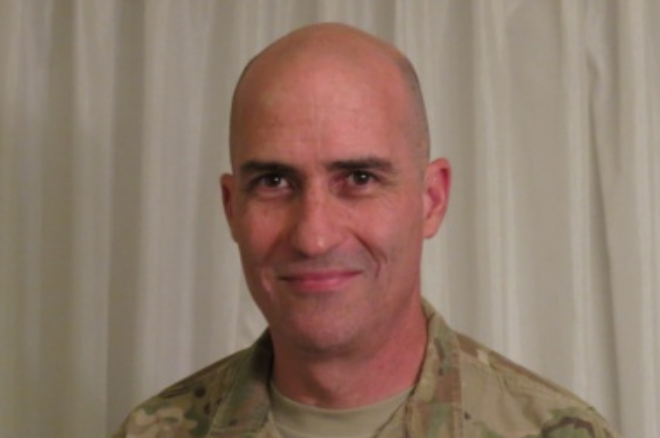 Alan Samuels is being recognized as a Champion of Change for his work advancing new ideas that are leading the way to a clean energy future and an economy that’s built to last.

I am humbled to be recognized as a White House Champion of Change on behalf of a dedicated community within the Department of Defense, whose focus is to improve our efficiencies in expeditionary energy. The logistics associated with transporting military power to remote areas across the globe are extraordinary and can lend themselves to inefficiencies, and therefore present an excellent opportunity for the Army and joint research and development communities. During my recent deployment to Afghanistan, in support of Operation Enduring Freedom, I had the opportunity to study our operational energy practices and technology and to learn where we can improve our power generation and usage techniques, training and material to make our forces effective across the full range of military operations -- from combat missions in Afghanistan, to humanitarian assistance/disaster relief missions anywhere in the world. History, and my own experience at the U.S. Army Research, Development and Engineering Command’s (RDECOM) Chemical-Biological center, shows that once the military develops these methods and technologies they transfer to the public and even more uses are found for them.

I deployed in April 2011 on behalf of RDECOM with the mission to stand up a science and technology integration and collaboration center at Bagram Airfield in Northeastern Afghanistan. The center’s mission was to provide responsive and innovative solutions to operational needs on the battlefield.  Among my earliest contacts were the Joint Engineers at Headquarters, U.S. Forces-Afghanistan (USFOR-A), who were configuring their office to address operational energy challenges. I reached back through RDECOM headquarters to compile information on mature, agile material solutions that address energy efficiency, and asked that a subject-matter expert in power and energy join my staff and stand up an energy cell whose focus would be to develop an understanding of the technical aspects of power generation and distribution in expeditionary operations and to make recommendations on material (i.e., technological) and non-material (i.e., organizational, training and doctrine) approaches that reduce fuel consumption.

The energy cell partnered with and supported several DOD entities in theater. The Army’s Rapid Equipping Force (REF) was in the assessment stage of its “Energy to the Edge” (E2E) initiative, which seeks to field hybrid and renewable energy technologies to the point of need – the forward operating bases and combat outposts where our mission in Afghanistan is so critically tied to counterinsurgency operations. We collaborated with the REF in its assessment and contributed materially to the difficult task of circulating the battlefield and reaching out to the remote outposts to understand and document their power and energy concerns. Our improved situational understanding led immediately to a course correction at the REF with its E2E initiative, but, more importantly, to a broader dialogue with the Army’s Training and Doctrine Command about how we equip and train soldiers within the Army’s Brigade Combat Team structure to address the pitfalls encountered when trying to power and refuel remote combat operations.

It was also a privilege to work with the Product Managers for Mobile Electric Power (PM MEP) and Force Sustainment Systems (PM FSS). They were well along the path toward acquiring and fielding improved efficiency systems for force sustainment, which we leveraged in an initiative to quantitatively analyze the benefits of several technologies associated with demand reduction (e.g., tent liners, tent shading, and improved efficiency environmental control units) and intelligent power production (e.g., load-sensitive microgrids that automatically control the number of generators necessary at any given time). These initiatives serve to demonstrate quantitatively the value of integrating energy efficiency and renewable energy for U.S forces and to inform DOD leaders how we configure and equip the future force.  I also seized an opportunity to collaborate with PM MEP and to directly contribute to the installation and operation of a 1 MW microgrid system that has reduced fuel use at Camp Sabalu-Harrison by 17 percent and reduce maintenance costs by 67 percent, while improving quality of life for soldiers at the camp and enhancing their safety by reducing the need for third-country driven fuel trucks to enter the camp and service generators. The energy savings means more than money saved, though that is a goal. Saving energy means fewer fuel deliveries, which means fewer Soldiers put at risk. For example, that 17 percent fuel reduction demonstrated the opportunity to remove convoys from roads throughout Afghanistan, where U.S. Transportation Command reported more than 1,000 attacks on fuel convoys in 2011. By reducing the need for petroleum-derived energy, we take more fuel trucks off dangerous roads on a contested battlefield. That cuts the risks for troops in the fight, giving them more time to focus on their missions, increasing their range and endurance, and reducing costs for taxpayers.

I also had the opportunity to travel to a combat outpost where the U.S. Marine Corps’ Energy in Expeditionary Operations (E2O) team was demonstrating its initiatives. I captured some of the materiel approaches being evaluated there and translated them into applications that may also benefit Village Stability Operations. In fact, we are now demonstrating hybrid power generator architectures that bank excess generator and renewable power into battery storage for improved energy availability and reliability while reducing fuel consumption.

The most important outcome of these collaborations and engagements is the dialogue that continues today throughout DOD on the importance of energy efficiency in expeditionary operations. It has been professionally gratifying to work on these issues with senior Army and DOD leadership, including Sharon Burke, the Assistant Secretary of Defense for Operational Energy Plans and Programs, and Katherine Hammack, the Assistant Secretary of the Army for Installations, Energy and Environment. Both visited Bagram and witnessed firsthand the energy initiatives that the REF, US Marine Corps, and RDECOM were demonstrating in theater. In her March 29 report to the House Armed Services Committee’s Subcommittee on Readiness, Burke reported: “In addition to promoting institutional change and support for current operations, Operational Energy Plans and Programs (OEPP) has worked to build operational energy security into the future force.”

The importance of our efforts was also highlighted by Hammack in her March 29 report to the House Armed Services Committee’s Subcommittee on Readiness, on the value of energy security from battlefield to the base.

“The U.S. Army Corps of Engineers has aggressively installed mini-grids throughout Afghanistan, consolidating point generators into fewer, larger and more efficient units. The increased efficiency from this effort will result in an annual fuel savings of more than 50 million gallons per year, the equivalent of removing nearly 20,000 fuel trucks from the road,” she said.

It great to be part of the change in climate that we are experiencing throughout DOD in the area of efficient and responsible fuel resourcing for combat operations. Our capabilities analysis process now incorporates energy considerations, and energy-efficient technologies are being proven and fielded for operational use throughout the DOD. I believe that this is particularly important to our National Security because innovation to reduce energy use for military operations often has a higher value proposition then it does in the civilian sector. Benefits for our troops are measured in increased operational capability, greater combat efficiency, and lower risk.  As DOD innovates for our own needs, these initiatives also will make energy efficiency solutions and renewable energy more accessible to the civilian sector.  I am honored to have had one small role in this shift in thinking and practice.

US Army Lt. Col. Alan Samuels is a Reserve Officer assigned to the Army Reserve Sustainment Command in support of the Research, Development, and Engineering Command.