April 25, 2012 at 12:05 PM ET by Josh Earnest
Twitter Facebook Email
Summary:
After President Obama traveled to the University of North Carolina at Chapel Hill and the University of Colorado at Boulder to have a vital conversation with students regarding federal student loans, the papers and television stations in both states provide a glimpse of the local response to his visits.

Yesterday, President Obama traveled to the University of North Carolina at Chapel Hill and the University of Colorado at Boulder to speak directly to students about the importance of preventing interest rates on federal student loans from doubling on July 1st. Today, he’ll continue this important conversation with the students at the University of Iowa.

The fact is, more than 7.4 million students with federal student loans will see their interest rates spike, unless Congress acts and keeps them from doubling. President Obama believes we must reward hard work and responsibility so more Americans get a fair shot at an affordable college education, the skills they need to find a good job, and a clear path to middle class.

As the President said, “In America, higher education cannot be a luxury.  It’s an economic imperative that every family must be able to afford.” He’ll continue to fight and push Congress to act. We know what’s at stake. For each year Congress allows the rate to double, the average student with these loans racks up an additional $1,000 in debt. We can’t afford to let it happen. Students around the country are joining the President’s call for Congress to get to work and do their job.

Let’s take a look at some of the coverage from the papers and television stations in North Carolina, Colorado and Iowa.

Obama kicks off a tour of three university campuses in three states – North Carolina, Colorado and Iowa – to urge Congress to prevent interest rates on many student loans from doubling this summer. If Congress does not act, the rates will rise from 3.4 percent to 6.8 percent July 1 for an estimated 7.4 million U.S. undergraduates who have federal loans.

CHAPEL HILL – President Barack Obama said Thursday that preventing interest rates on federal student loans from doubling in July is a “no-brainer” and should appeal to both congressional Democrats and Republicans.

CHAPEL HILL -- When President Barack Obama spoke Tuesday at UNC Chapel Hill, he wasn't just a president trying to promote his higher education policy. To many students, he was someone who understood their burdens of carrying college loans.

CHARLOTTE, N.C. -- Local college students say if Congress doesn’t keep federal student loan interest rates low, it could hurt their ability to pay for school, or make them decide if an education is worth continuing in a bad economy with poor job prospects for recent graduates.

GUILFORD COUNTY, N.C. — The current interest rate on a student loan is 3.4 percent.  But if Congress doesn’t act before July 1, the rate will double to 6.8 percent.  “That rate sounds depressing,” said LaTasha Henry, a student who works at the computer lab at Guilford Technical Community College. “Upon graduation, you are not guaranteed a job.”

Chapel Hill, NC - President Barack Obama traveled to Chapel Hill on Tuesday to speak about his plan to prevent interest rates on students loans from doubling, while also courting the crucial youth vote in North Carolina. "I don't want this to be a country where a shrinking number of Americans are doing really really well, but a shrinking number of Americans are just struggling to get by," the President said. 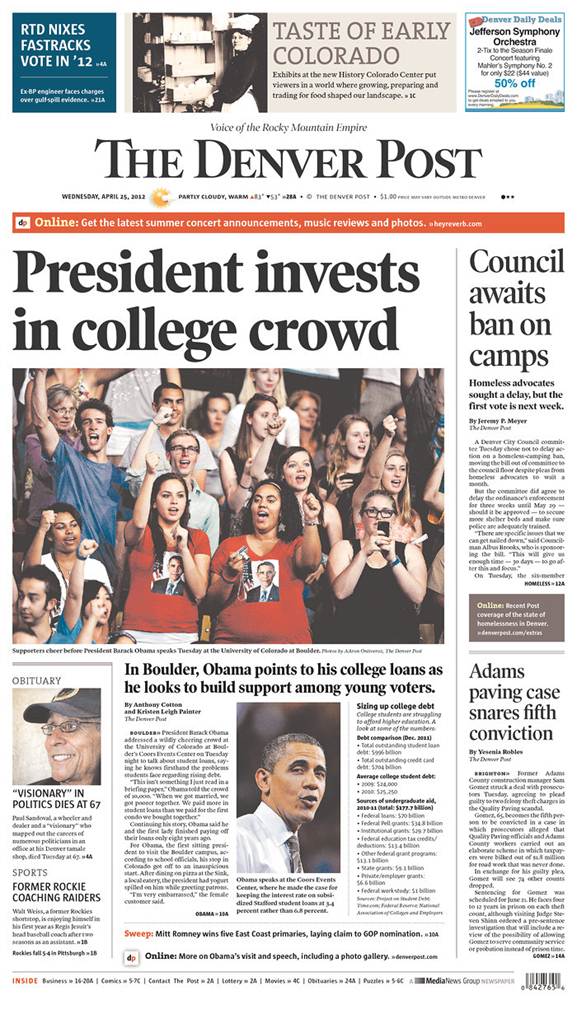 BOULDER — President Barack Obama arrived at the University of Colorado and the Coors Event Center to talk about student loans, saying he knows first-hand the problems students face regarding rising debt.

President Barack Obama's speech in Boulder on Tuesday night may have been focused on issues related to the college-student demographic, but to some local business and community leaders in attendance, his visit and his words had a broader effect

If it weren't for Pell grants, Anastasia Ionkina would not be a student at the University of Colorado.   So it struck a chord with the Russian immigrant when President Barack Obama expressed concern in his speech at CU about the fallout from increasing higher education costs and the potential for Stafford loan interest rates to double in July.

KKTV-CBS– Obama In Boulder To Talk Student Loans At CU

President Barack Obama spoke to a crowd of University of Colorado students in Boulder Tuesday. He talked about student loans.  If Congress doesn’t act by July, the interest rate for new subsidized Stafford loans will double. Obama is pushing for Congress to prevent that increase.

Four years ago, presidential hopeful Barack Obama became the Democratic darling in this college town and elsewhere, establishing a groundswell of young voter support that helped launch his run to the White House.

President Obama comes to the University of Iowa today. His message should get college students’ attention: Do not double the interest rate on federal subsidized Stafford student loans.

IOWA CITY, Iowa -- The University of Iowa Field House will be filled with students and staff members on Wednesday to hear a speech by President Barack Obama.  His message will be very similar to the one he has shared with students in other parts of the country during his three-state tour.

University of Iowa and White House officials stressed the importance of bipartisan support for student loans and college affordability in light of President Obama's visit to campus today.