May 3, 2012 at 1:43 PM ET by Frank Kendall
Twitter Facebook Email
Summary:
The less we spend on fuel and energy, the more we have for other critical defense priorities. That's why, next year, the Department of Defense will invest almost $3 billion in energy efficiency and renewable energy.

He remarked that from a security and financial perspective, we have a deep commitment to finding better energy options. For example, reducing the amount of fuel used by our equipment translates to fewer loads for supply convoys, which insurgents have targeted in places like Afghanistan. And the less we spend on fuel and energy, the more we have for other critical defense priorities. That's why, next year, DoD will invest almost $3 billion in energy efficiency and renewable energy. You can read Secretary Panetta’s remarks here.

For our combat forces, we're investing in better generators and microgrids for our combat bases, hybrid engines for ships and vehicles, and more efficient aircraft. While some of these investments are long-term, many will result in immediate returns. For example, the Marine Corps’ Experimental Forward Operating Base (ExFOB) has been testing energy efficient and renewable technologies that make the Marines more flexible, agile, and lethal. 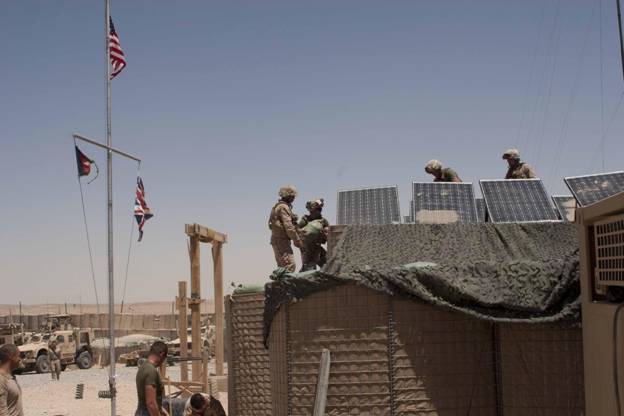 The Marine Corps kicked off their 2012 Experimental Forward Operating Base initiative at Camp LeJeune, NC on May 2 with Assistant Secretary of Defense Sharon Burke. Marines across Afghanistan are using energy efficient and renewable technologies to become more flexible, agile, and lethal. (Photo from the US Marine Corps)

3rd Battalion, 5th Marine Regiment deployed in 2010 with first generation ExFOB gear. The results spoke for themselves. The Marines operated two patrol bases solely on renewable energy, reduced energy use by 90 percent at a third base, and executed a three-week foot patrol without battery resupply, reducing load on Marines by 700 lbs. In less than a year, technologies demonstrated at this first ExFOB were deployed widely to combat forces in Afghanistan.

For our bases here at home, we are investing to reducing our costs and improve our energy security.  A key to this is advanced technology.  The Department’s strategic guidance depends on maintaining our historic position as a technology leader – and energy plays a critical part.  It’s why we are using our installations as a test bed for new energy technologies like improved lighting, high-efficiency HVAC systems, better windows, and new roofs.

Additionally, as the White House announced last month, the Army, Navy, and Air Force have committed to adding about three gigawatts of renewable energy to these bases in the coming years - enough to power 750,000 homes representing one of the largest commitments to clean energy in the Nation's history.

Finally, here at the Pentagon, I joined Dr. Dorothy Robyn, Deputy Undersecretary for Installations and Environment, in hosting the 2012 Commander in Chief's award for Installation Excellence yesterday.  The award is the highest honor a military installation can receive and recognizes the efforts of the people who operate and maintain U.S. military installations.  One of the award’s criteria is energy conservation.  In 2011, one of the awardees, Davis-Monthan Air Force Base reduced its utility costs by nearly 8 percent, integrated solar water heaters into new construction projects, and retro-commissioned five facilities for a 30 percent reduction in energy use.

Improving our energy and environmental security helps our troops better carry out their mission – to defend the nation.  As DoD’s chief buyer, that’s why I’m interested in finding the best energy technologies to meet these needs.

Frank Kendall is the Acting Undersecretary for Acquisition, Technology, and Logistics at the Department of Defense.