Believing to Succeed: The Power of STEM Education

May 7, 2012 at 12:25 PM ET by Rafael San Miguel
Twitter Facebook Email
Summary:
Deaf since infancy, Rafael San Miguel, former scientist for NASA and current scientist as Coca Cola, inspires youth to get excited about STEM. Using his disability as a means for motivation, Miguel far exceeded his dreams. 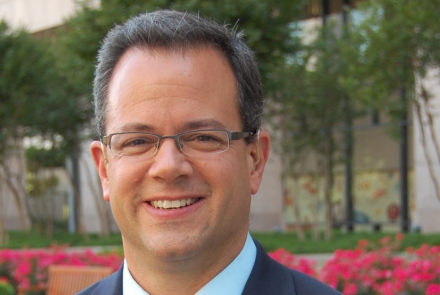 Rafael San Miguel is being recognized as a Champion of Change for leading education and employment efforts in science, technology, engineering and math for Americans with disabilities.

Due to an incorrect dose of antibiotics, I became deaf when I was a few days old. At the St. Joseph’s Institute for the Deaf in St. Louis, the dedicated Sisters of St. Joseph taught me to speak the same way Helen Keller learned, by feeling vibrations on someone else’s throat. After graduating from all-hearing Chaminade Prep School in St. Louis, I attended Texas A&M as an undergraduate. If you know any Aggie, you know you don’t go through Texas A&M without emerging with the understanding and responsibility of service to others. I was able to get through college without the use of an interpreter primarily because I was surrounded by a community of people eager to step up and lend a hand by taking lecture notes for me in class.

After college I began my career as a scientist working for NASA. Ever since I was a young boy I had wanted to become an astronaut, but realized that I couldn’t because of my disability. If you say to mission control “Houston, we have a problem” you need to be able to hear their response. However, what I still could do was work on the Space Shuttle program as a scientist where my work developing food for astronauts involved a project to send the first can of Coca-Cola into outer space. This was ironic since I would find myself in my private sector career working for The Coca-Cola Company as a flavor chemist, now for over 23 years.

I first began working in my community on disability-related initiatives with my wife, Betsy, and Mayor Shirley Franklin to bring the concept of integrated playgrounds to Atlanta. I became passionate about this need, not only to allow kids of all abilities to be able to be active and enjoy play, but also because I quickly realized the profound and positive impact on kids without disabilities. As I watched kids play together on a field where they could both participate for their abilities, I saw how the experiences they were having would impact their future perception of disability. My work life has in no way been free from challenges related to having a major disability, but what I realized for the first time was that if in the workplace people who had the most trouble working alongside someone with a disability had ever experienced growing up alongside someone with a disability in this way, they would most certainly have had a changed perspective. I envisioned many things that I could do in my community to have an impact today, but those experiences for young people could play a big role in their awareness of disability and help to change the future.

After meeting with the Labor Department in 2008 they told me how rarely they see someone with a major disability achieve mainstream corporate success, especially in science, and if there is a science gap faced by many young people, the most marginalized may be those with disabilities. This is doubly tragic given that science is a specific area where many individuals with disability are even better suited to exceed in performance beyond their non-disabled peers. I devised a series of science experiments that were fun and interactive as well as educational, and began to visit Drew Charter school in the East Lake community of Atlanta, a school that went from one of the worst in the state to one of the best as a direct result of building a community that supported education.

I continued to visit elementary and middle schools to teach, excite and inspire kids in science both locally and when traveling by connecting with underserved schools through the volunteer network of Points of Light. In Washington, DC I worked through DC Cares (part of Points of Light volunteer network) to find schools to visit and teach science. I visited one middle school that most people would categorize as a “rough environment”. The library for the entire school had fewer books than I have in my office at work. Most of the students landed there after being largely unsuccessful at other schools. When I began to speak to them the kindest thing I can say is they were rude. They couldn’t figure out why my voice sounded a little different and I could tell it was all they could do not to ridicule my disability.

As I began to teach them about science they gradually became more and more engaged. I quickly realized by their answers to my questions that many of the kids were really smart. The ones who were most disinterested in the beginning ending up being the ones who came up to me after class and asked me how they could learn more about science. When I finished all my experiments I asked everyone to raise their hands if they thought science was cool. Every hand quickly shot up. I then asked, “What do you want to be when you grow up?” Every student responded, “A scientist for The Coca-Cola Company!"

Currently, I’m designing the U.S. Science Project, an innovative concept of a corporate teaching classroom to inspire young people in the area of science and technology by connecting scientists with schools through existing volunteer networks to create those essential experiences that will inspire young people to pursue educational and employment opportunities in STEM.

I am fortunate to work for a company being led by a CEO who has for decades in his personal life devoted himself to causes empowering those with disability, such as Special Olympics. I am lucky to have landed working for two great bosses who support me in my science work and have chosen to see me as someone with limitless ability rather than a limiting disability. And I am proud and humbled to be recognized as a Champion of Change. Volunteer service has always been the driving force behind solving the world’s most challenging problems. I believe that every person is a champion who has the courage and optimism to think they can do something to make a difference and change the status quo to better a circumstance in the world.

Rafael San Miguel is a scientist for The Coca-Cola Company. Rafael also serves as a board member of the Atlanta Speech School, an 80-year old private institution focused on meeting the needs of those with speech and language based disabilities.