Letter from Prague: Every Day a Miracle

May 18, 2012 at 12:01 PM ET by Ambassador Norman Eisen
Twitter Facebook Email
Summary:
Ambassador Norm Eisen reflects on his first months as the US Ambassador to the Czech Republic. 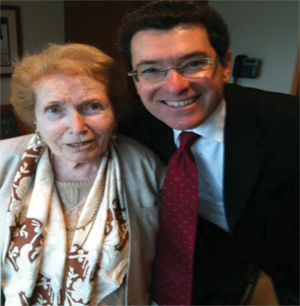 Many of our US ambassadors have strong family connections to their host nations, and I am no exception.  My mother, who passed away earlier this year, was born in then-Czechoslovakia, survived the Holocaust, and later fled Communism and immigrated to the US.  She was very proud that I had returned to the Czech Republic representing the mightiest nation on earth.  She liked to tell people that “the Nazis deported me and my family to Auschwitz in a cattle car, and my son flew back on Air Force One!”  I am so glad that we shared a last adventure together in the form of my ambassadorship before she passed.

While it is a great honor to serve, returning to a place where my mom, the rest of my family, and so many other Czechs and Slovaks were oppressed by the Nazis and the Communists, was not without its challenges.  I felt the weight of that history particularly during the first weeks of living in my residence – a home built by a Czech Jewish family that was commandeered by the Nazi General Staff before being purchased by the US after World War II.  Not long after moving in I discovered a swastika and a Nazi inventory number affixed underneath a beautiful antique table in my foyer—-seeing that was a stab in the heart.

Of course, intellectually I recognized that my return represented a triumph over evil, but it took a little while to feel that triumph emotionally as well.  The Czechs, including my Mom, had long practice in dealing with the complexities of history, and they offered great advice.  And of course my American optimism and my Jewish traditions also helped me make sense of the experience.  That really hit home at the end of my first year in Prague, when my family and I celebrated Hanukkah in the house.  The Hanukkah story is, of course, about reconsecrating what was made unholy by oppressors.  We felt that by celebrating in the former home of a Czech Jewish family and the Nazi General Staff we reconsecrated the house and were living the message of the holiday -- freedom from oppression.   Of course, my country made all of this possible.  In 1946, the United States began leasing the Ambassador's Residence from the Czechoslovak Government.  Two years later we purchased the property outright by forgiving any debts owed to us by the Czechs, shortly before the coup d'etat which brought the Communist regime to power.

Since arriving in Prague over a year ago I have done my best to become a member of the authentic life of the city, including the small but dynamic Jewish community.  Given my roots, it is incredibly powerful to worship every Shabbat in Prague’s Old-New Synagogue.  It is a place where Jews have been praying more or less continuously since about 1270.  It is one of the oldest operating synagogues in the world, and my ancestors certainly prayed here when travelling through Prague--although as far as I know I am the first in the family to earn an assigned seat!  In the terrible pogroms of 1389, the walls of the synagogue were splashed in blood and were left that way for about two centuries.  Finally painted over in the sixteenth century, it has left an indelible memory in my consciousness and that of Prague.  We are fortunate to be part of this community that has so many important links with the Jewish community in the United States and around the world.

From the time I was a child, my mother told me about growing up in the newly-independent Czechoslovakia led by President Masaryk, about the horror of the Nazi occupation, and about the hopes for a new beginning after the war, only to have the Communists take over.  Never did I imagine then that I would one day have the privilege to represent my country as Ambassador in her former homeland, what is now the Czech Republic.  It is miraculous.

Also miraculous on a larger scale is the rebirth of freedom here in the Central Europe after so many years of totalitarian oppression.  The Czech people are among our closest allies in the world today.  Their soldiers have served with us in Afghanistan and Iraq and the Czechs have stood up for freedom around the world, from Cuba to Libya.  I strive daily to justify the trust that President Obama placed in me by further strengthening the ties of friendship between our two countries.  My mom would accept nothing less.

Norm Eisen is the United States Ambassador to the Czech Republic.