May 29, 2012 at 6:58 PM ET by Brad Cooper
Twitter Facebook Email
Summary:
The first contingent of 24 women who completed the Navy’s nuclear submarine program met with President Obama and First Lady Michelle Obama at the White House

In 2009, U.S. Navy Secretary Ray Mabus announced that for the first time in Navy history, women would be assigned to serve aboard Navy submarines. 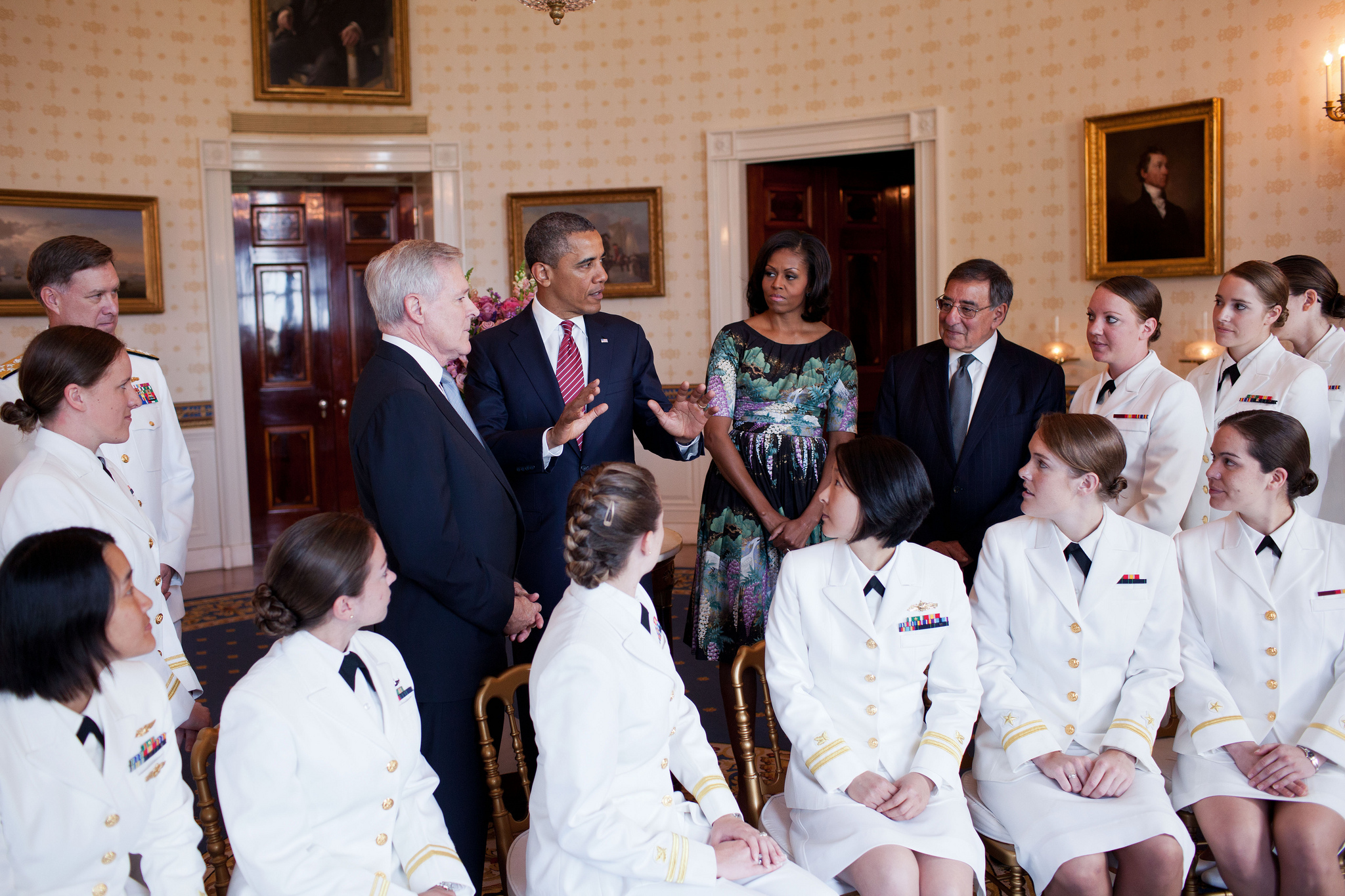 President Barack Obama and First Lady Michelle Obama greet the U.S. Navy’s first contingent of women submariners to be assigned to the Navy’s operational submarine force, in the Blue Room of the White House, May 28, 2012. The 24 women were accepted into the Navy’s nuclear submarine program after completing an intensive training program and serve on ballistic and guided missile submarines throughout the Navy. Also attending were ADM Mark Ferguson, left, Navy Secretary Ray Mabus and Defense Secretary Leon Panetta, right. (Official White House Photo by Pete Souza) May 28, 2012.

The commitment by the Navy to put women on submarines has gone from idea to reality in just a few short years -- these women are now serving in a variety of important jobs aboard ballistic and guided missile submarines in the Navy's Atlantic and Pacific Fleets.

And they are exceptional women with enormous responsibility. A submarine is among the most technologically advanced machines ever built and one that requires a tremendous amount of skill, knowledge, personal discipline, and teamwork. Imagine working and living in a 300-600 foot long, 30-40 foot wide, three-story building with no windows, submerged beneath the surface of the ocean for months.

Take Lieutenant Britta W. Christianson, a native of Chippewa Falls, Wisconsin, and a graduate of the University of Wisconsin. After serving in the Navy onboard a Guided Missile Destroyer for more than 2 years, she volunteered for duty in Afghanistan, where she served in an important logistics and fueling leadership role with the Afghan National Police (ANP) as part of the NATO Training Mission. While deployed, she applied to the Navy Submarine Program, was accepted, and then reported to the USS OHIO, a Guided Missile Submarine, as the Supply Officer. Lt. Christianson is in charge of all the logistics that keep a submarine going -- maintaining supplies, keeping spare parts moving and feeding the crew -- hard at work, 24 hours a day. She has already completed one full deployment on OHIO and is the first woman to qualify Diving Officer of the Watch (DOOW).

And Ensign Megan Bittner, a native of Norfolk, Virginia and a 2010 graduate of North Carolina State University with a degree in Chemical Engineering, is assigned as the Electrical Assistant in USS OHIO. Since reporting onboard OHIO, Ensign Bittner quickly qualified Engineering Officer of the Watch (EOOW) and also stood watch as Junior Officer of the Watch and Junior Officer of the Deck (surfaced and submerged). These are important roles in maneuvering the submarine while it transits in and out of port, and while it is submerged under water -- no small feat as the USS OHIO is nearly 2 football fields long.

Several women among the group are married. Lieutenant Junior Grade Tabitha Strobel is a 2010 graduate of the U.S. Naval Academy. Originally from Bowie, Maryland, she is assigned to the Guided Missile Submarine USS GEORGIA and has already deployed once. Tabitha is married to Lieutenant Junior Grade William Strobel of Elburn, Illinois, also a Naval Academy graduate and assigned to the Ballistic Missile Submarine USS WYOMING.

Serving aboard a submarine is no easy life, and these talented young women could have chosen more simple paths. But these women are special – they are deeply dedicated and are already charting a new course for women to serve in the world's greatest Submarine Force.