Yesterday, President Obama celebrated Father’s Day a little early with four dads at Kenny’s Barbeque Smokehouse in Northeast Washington, DC.  The four fathers, two active duty members of the military and two long-time local barbers from Mason’s Barbershop, talked about the rewards and challenges of fatherhood as well as the joy and anxiety fathers experience watching their children grow up. 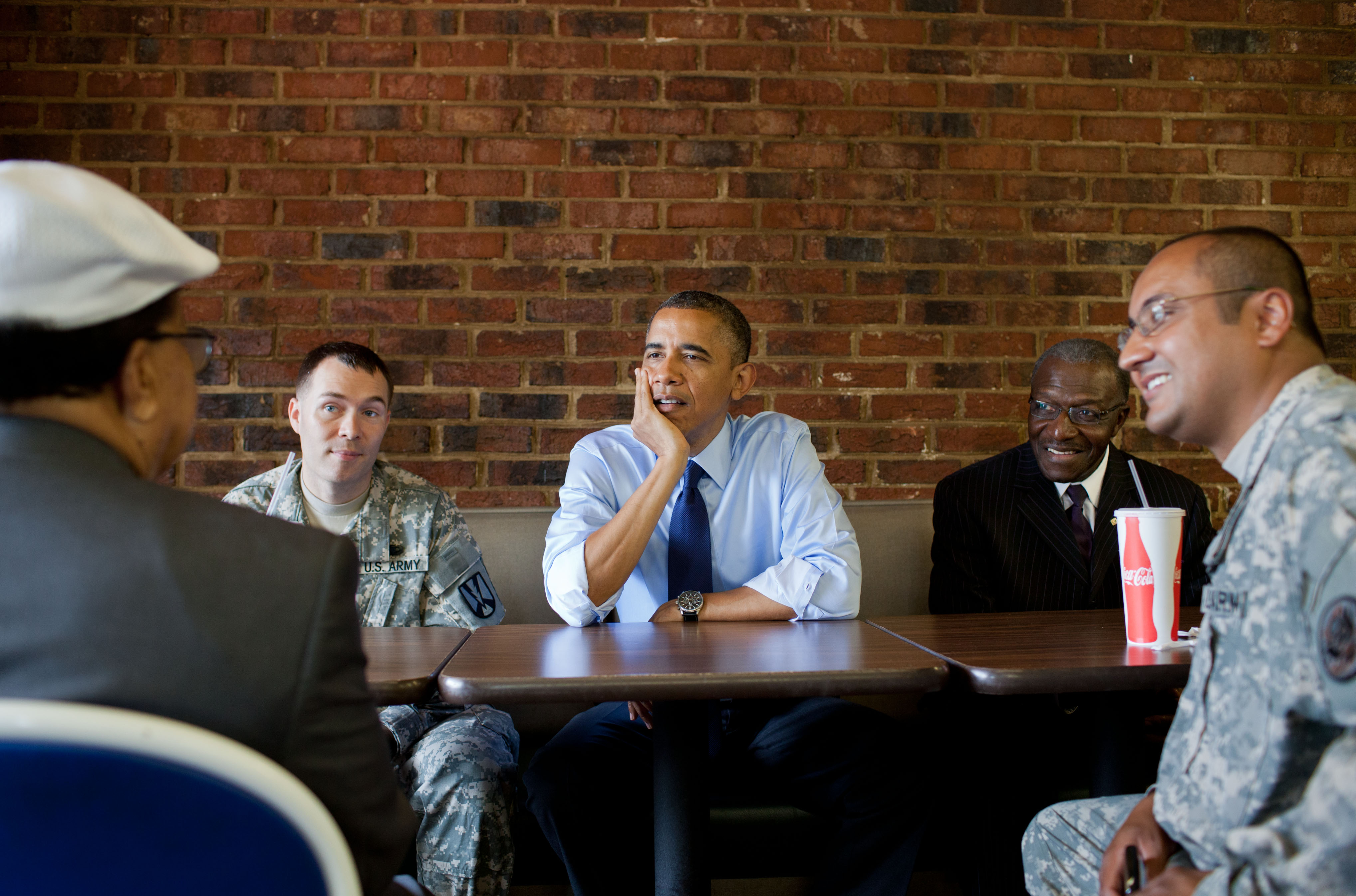 The President talked about his support for military families along with the First Lady and Dr. Jill Biden through Joining Forces. The President also discussed “Fatherhood Buzz,” a new initiative in conjunction with the U.S. Department of Health and Human Services designed to reach out to dads with positive information through their barbers and barber shops, as part of the Administration’s longstanding Fatherhood and Mentoring Initiative.  Each quarter will feature a different “buzz” topic – the topic for the first quarter is financial literacy and job training. The initiative is taking place across the country this weekend, including at Mason’s Barber Shop on H Street Northeast in Washington, DC. Nurney Mason, who joined the President for lunch today, has operated Mason’s Barber shop for over 51 years.

1st Lieutenant William (Bill) Edwards of the U.S. Army  is currently based at Fort Jackson in South Carolina where he lives with his wife of 13 years, Esther, and their four children. Lt. Edwards was recently honored by the National Fatherhood Initiative with the 2012 Military Fatherhood Award. He was deployed with the 3rd Infantry Division Band in 2007-2008 for 14 months in Iraq.  While he was deployed, he sent a flag that had flown over Camp Victory headquarters in Iraq to his daughter's preschool as a reminder of how much he cared about his family.

Captain Joubert Paulino of the U.S. Army is currently based at Fort Meade in Maryland along with his wife of 16 years, Ginamarie, and their two children Jonah, age 6, and Julia, age 4. CPT Paulino uses his will for adventure to stay connected with his children. For example, he involves his children in the selection process of states or countries where they would like to start an adventure or experience of a lifetime. CPT. Paulino continuously travels for his specialized emergency response team, and serves his country through biological and nuclear defense; however, CPT Paulino remains very involved in his son Jonah's Tiger Scout troop.

Otis “Big O” Gamble is still an active barber at Mason’s Barber Shop, a participant in the “Fatherhood Buzz” imitative through the U.S. Department of Health and Human Services.  Nurney Mason, the barbershop owner, hired Gamble 45 years ago, and they’ve been cutting hair together for decades.  Mr. Gamble had a successful career in the U.S. Army and as a barber. He  raised three wonderful children, including a son who is retired from the Army and a daughter who is currently a Major in the Army.

Later in the day, the White House  Office of Public Engagement and Office of Faith-Based and Neighborhood Partnerships honored 10 individuals who are doing tremendous work in the field of fatherhood.  Education Secretary Arne Duncan and Attorney General Eric Holder delivered  remarks at the event where they discussed the importance of fatherhood and healthy families to build stronger communities. The Champions of Change program was created as a part of President Obama’s vision to recognize ordinary Americans who do extraordinary work to serve and strengthen communities around the country. Click HERE to see the full list of Fatherhood Champions of Change.