Earlier this week, the Department of Defense (DoD) held its first ever LGBT Pride Month event at the Pentagon, commending the service and sacrifice of gay and lesbian servicemembers and LGBT civilian personnel.   The event follows the full implementation of repeal of “Don’t Ask, Don’t Tell.” 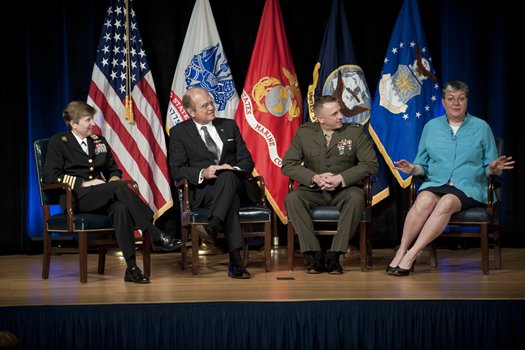 The event began with a viewing of President Obama’s Pride Month video message followed by a video message by Secretary of Defense Leon Panetta.

We have the mightiest military in the world. Not just because of our planes, guns, tanks and ships. But because of our people, their ability to adapt to change, and their respect for the rule of law, their commanders and their civilian leaders.

The event also featured a panel discussion on “The Value of Open Service and Diversity,” featuring Sue Fulton, West Point ’80 and a Member of the Board of Visitors at the U.S. Military Academy at West Point, Gordon Tanner, principal deputy general counsel for the Air Force, and Marine Corps Capt. Matthew Phelps.

Read a transcript of the event, watch archived video, and view a photo essay of the event