June 28, 2012 at 3:18 PM ET by Kori Schulman
Twitter Facebook Email
Summary:
During the fight for health care reform, Natoma's letter reminded the President of all the Americans, all across the country, who have had to worry not only about getting sick, but about the cost of getting well. 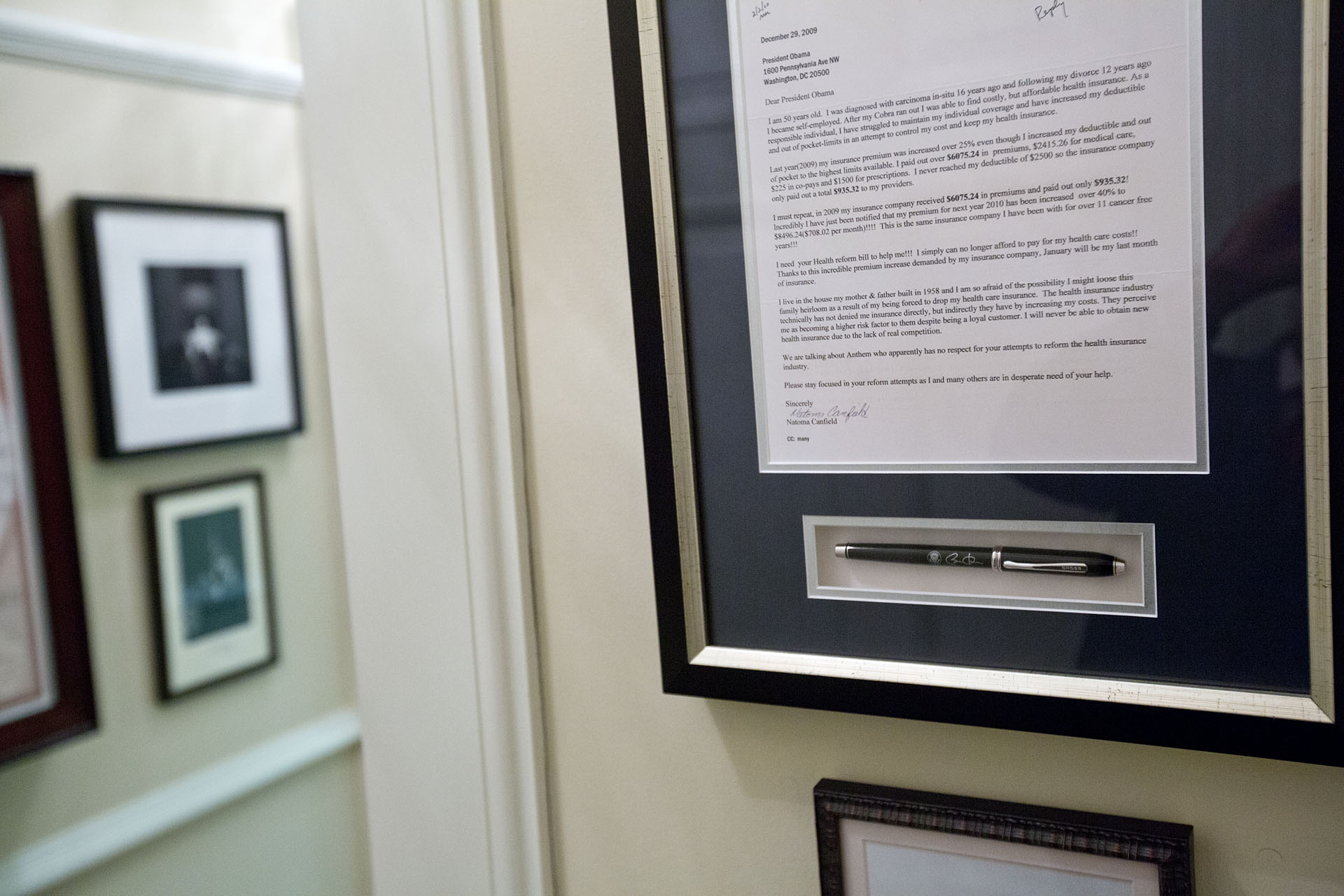 A letter from Natoma Canfield, a woman from Ohio that President Barack Obama met who didn’t have health insurance, hangs on the wall in the hall between the Oval Office and the President's Private Office in the West Wing. June 28, 2012. (Official White House Photo by Lawrence Jackson)

This letter in my office is a reminder of how health reform benefits Americans. Today's victory is 1 for all of us. -bo twitter.com/ObamaWhiteHouse/sta…

Today, the President told Natoma's story and explained why he carried it with him every day of the fight to pass this law:

For years and years, Natoma did everything right.  She bought health insurance.  She paid her premiums on time.  But 18 years ago, Natoma was diagnosed with cancer.  And even though she’d been cancer-free for more than a decade, her insurance company kept jacking up her rates, year after year.  And despite her desire to keep her coverage -- despite her fears that she would get sick again -- she had to surrender her health insurance, and was forced to hang her fortunes on chance.

I carried Natoma’s story with me every day of the fight to pass this law.  It reminded me of all the Americans, all across the country, who have had to worry not only about getting sick, but about the cost of getting well.

Natoma is well today.  And because of this law, there are other Americans -- other sons and daughters, brothers and sisters, fathers and mothers -- who will not have to hang their fortunes on chance.  These are the Americans for whom we passed this law.

And here is the full text of Natoma's letter:

I am 50 years old.  I was diagnosed with carcinoma in-situ 16 years ago and following my divorce 12 years ago I became self-employed.  After my Cobra ran out I was able to find costly, but affordable health insurance. As a responsible individual, I have struggled to maintain my individual coverage and have increased my deductible and out of pocket-limits in an attempt to control my cost and keep my health insurance.

I need your Health reform bill to help me!!!  I simply can no longer afford to pay for my health care costs!!  Thanks to this incredible premium increase demanded by my insurance company, January will be my last month of insurance.

I live in the house my mother & father built in 1958 and I am so afraid of the possibility I might loose [sic] this family heirloom as a result of my being forced to drop my health care insurance.  The health insurance industry technically has not denied me insurance directly, but indirectly they have by increasing my costs.  They perceive me as becoming a higher risk factor to them despite being a loyal customer. I will never be able to obtain new health insurance due to the lack of real competition.

We are talking about Anthem who apparently has no respect for your attempts to reform the health insurance industry.

Please stay focused in your reform attempts as I and many others are in desperate need of your help.
Sincerely,

For a comprehensive overview of the Affordable Care Act, visit WhiteHouse.gov/HealthReform and HealthCare.gov.