June 29, 2012 at 10:41 AM ET by Peter Malnak
Twitter Facebook Email
Summary:
Mr. Malnak’s swearing-in took on special significance as it marked the first time a same-sex partner of a new USAID Mission Director participated in the event by holding the copy of the U.S. Constitution.

Ed. note: This piece is cross-posted from the USAID blog.

Earlier this week, Administrator Shah administered the Oath of Office to Peter Malnak, USAID’s new Mission Director to Rwanda.  As USAID works to build a more inclusive agency, Mr. Malnak’s swearing-in took on special significance as it marked the first time a same-sex partner of a new Mission Director participated in the event by holding the copy of the U.S. Constitution.  Mr. Malnak referenced the importance of the occasion in his remarks, portions of which are excerpted below. 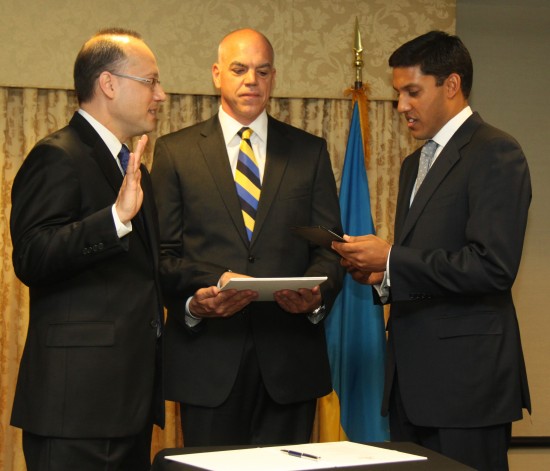 Administrator Shah administers the Oath of Office to USAID Mission Director to Rwanda Peter Malnak as his partner John Palmucci holds a copy of the U.S. Constitution. Credit: USAID

I would like to thank Administrator Shah and Deputy Administrator Steinberg for their leadership over the past two and half years. Their vision for reform, and commitment to inclusive leadership, has made us a stronger organization that helps more people than ever before.

I would also like to acknowledge Secretary of State Hillary Rodham Clinton for her commitment to inclusive leadership and tireless support for the LGBT community.

The story [of how I joined the Foreign Service] offers an example of the importance of personal leadership, how using your moral compass can change the lives of others, and provides a glimpse into how USAID has changed over the past twenty years by creating a more diverse, inclusive and global workforce.

When I joined the Foreign Service in 1992, Europe had just broken down internal barriers, and the dramatic changes in the former Soviet Union were still unfolding. Socially, there were important issues society continued to grapple with.  One was gay rights.  Being gay in 1992 was something many people didn’t speak about.  That’s not surprising as being gay in almost all states was grounds for dismissal from your job, removal from housing and within the federal workforce, in many cases, rejection of a clearance, based on security.  With the AIDS epidemic in the backdrop, significant bias continued.

One of the first lessons I learned in 1992 is just how small an agency USAID was. It seems that my candidacy had been called into question by some on the panel because they had speculated I was gay. I learned that it was the courage and integrity of a few members, charting a new course for USAID that ultimately prevailed.  I am incredibly grateful to those individuals who used their own moral compasses to create a more inclusive organization.

Later, I was excited to be part of the drafting of the Agency’s more inclusive policy on non-discrimination that codified what many accept as common practice today.

So I am grateful to have been selected as USAID’s Mission Director for Rwanda.  It is an impressive place and a very capable partner. Service in Rwanda is a dream for both me, and my partner John.