June 29, 2012 at 3:19 PM ET by Jarred Reiling
Twitter Facebook Email
Summary:
To celebrate Father's Day, the White House Champions of Change initiative honored those advancing fatherhood and mentorship in communities of low-income men and boys. Inspiring our youth by creating a lifelong bond from a father to a child is of paramount importance for the well-being of our children, and it is a cause that reaches and affects us all. 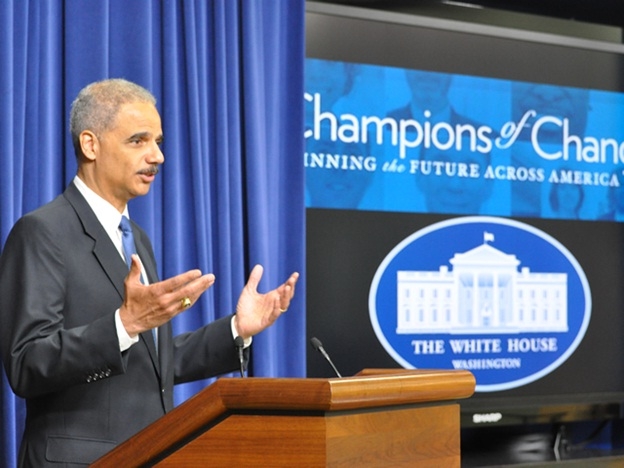 Attorney General Eric Holder addresses the Fatherhood Champions of Change and attendees at the White House event. The Attorney General shared that the most important job he has had is being a dad to his three children. (Photo by Jarred Reiling)

The White House initiative Champions of Change honors Americans who have strengthened their communities. The initiative seeks to solicit their ideas, hear of their successes and learning experiences, and harness their passion in order to maximize their potential to promote change across the country.

Last week, the White House focused on fatherhood in support of President Obama’s Fatherhood & Mentoring Initiative and in celebration of Father's Day. Each of the ten Champions of Change honorees contributed incredible work in the fields of fatherhood in communities of low-income men and boys.

The event had an air of enthusiasm, as it was well-attended by many key stakeholders within the cause of advancing fatherhood and mentorship among children without fathers. In addition to the Executive Director of the White House Office of Faith-based and Neighborhood Partnerships, Joshua DuBois, Attorney General Eric Holder and Secretary of Education Arne Duncan made appearances to share their thoughts in honoring the Champions.  Check out the event here.

Witnessing the excitement and passion for the fatherhood cause incites moments of reflection.  Inspiring our youth by creating a lifelong bond from a father to a child is of paramount importance for the enhanced well-being of our children, and it is a cause that reaches us all—as each and every one of us has the potential to have a relationship with our fathers.

But equally important is the role we can play as mentors for those children who, due to circumstances beyond their control, do not have fathers in their lives.  These children must be reminded that the absence of their fathers is to no fault of their own, and they must know that they are not forgotten.

Father’s Day is a celebration for everyone—be they fathers, mentors, potential mentors, and perhaps most importantly, the children affected by the presence and absence of fatherhood and mentorship. In the words of the Attorney General: “of all the titles I’ve held in my life – lawyer, prosecutor, judge, U.S. Attorney, and, now, Attorney General – the one I’m most proud of is ‘father.’  As fathers, we have an opportunity today, as we do every day, to act responsibly in the lives of our own children. And by setting a good example, each of us can have a significant impact on the future of our nation, in profound and positive ways.”

Let us continue  – and inspire others to begin  – that work today.

Jarred Reiling is a Presidential Management Fellow at the Center for Faith-Based and Neighborhood Partnerships at the U.S. Department of Justice.