July 6, 2012 at 10:01 AM ET by Alan Krueger, Alan B. Krueger
Twitter Facebook Email
Summary:
With today’s report that private establishments added 84,000 jobs last month, the economy has now added private sector jobs for 28 straight months, for a total of 4.4 million payroll jobs during that period. Employment is growing but not fast enough, given the jobs deficit caused by the deep recession.

While the economy is continuing to heal from the worst economic downturn since the Great Depression, much more remains to be done to repair the damage from the financial crisis and deep recession that followed. It is critical that we continue the policies that build an economy that works for the middle class and makes us stronger and more secure as we dig our way out of the deep hole that was caused by the severe recession. There are no quick fixes to the problems we face that were more than a decade in the making. President Obama has proposals to create jobs by ending tax breaks for companies to ship jobs overseas and supporting State and local governments to prevent layoffs and rehire hundreds of thousands of teachers.

Today’s report from the Bureau of Labor Statistics (BLS) shows that private establishments added 84,000 jobs last month, and overall non-farm payroll employment rose by 80,000. The economy has now added private sector jobs for 28 straight months, for a total of 4.4 million payroll jobs during that period. Employment is growing but it is not growing fast enough given the jobs deficit caused by the deep recession.

Manufacturing employment continues to expand and manufacturers added 11,000 jobs in June. After losing millions of manufacturing jobs in the years before and during the recession, the economy has added 504,000 manufacturing jobs since January 2010--the strongest growth for any 29-month period since April 1995. To continue the revival in manufacturing jobs and output, the President has proposed tax incentives for manufacturers, enhanced training for the workforce, and measures to create manufacturing hubs and discourage sending jobs overseas.

As the Administration stresses every month, the monthly employment and unemployment figures can be volatile, and employment estimates can be subject to substantial revision.  Therefore, it is important not to read too much into any one monthly report and it is informative to consider each report in the context of other data that are becoming available. 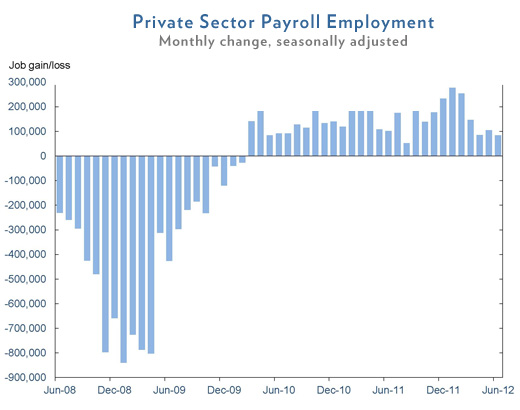