July 12, 2012 at 5:28 PM ET by Secretary Hilda Solis, Hilda Solis
Twitter Facebook Email
Summary:
The Summer Jobs+ initiative is helping young people all across the country find summer employment opportunities and there’s still time to find one near you. 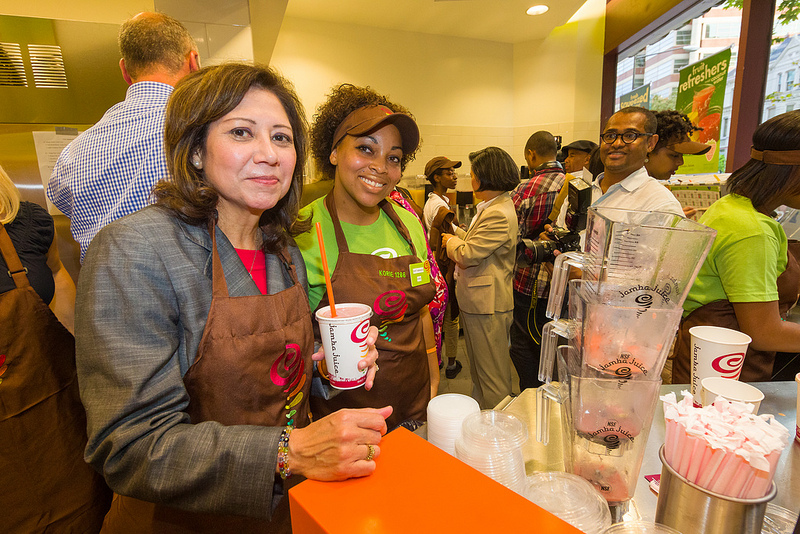 Ed. note: This is cross-posted from Work in Progress, the official blog of the Department of Labor.

Earlier this week I had the chance to attend the opening of a new smoothie shop in the Dupont Circle neighborhood of Washington, DC and meet a number of young people hired by Jamba Juice as part of our Summer Jobs+ initiative.

Seeing the shift manager Korie and the rest of her crew working hard and smiling each step of the way it’s hard not to think about my first job and what it meant to me and my family.

In my teens, I worked as a recreational aide in my community supervising and mentoring youth in various educational programs.  I also spent a summer working in a library—stacking and cataloging books and helping my classmates choose books to read.

I met role models during those jobs that helped me become the first member of my family to go to college and put me on a lifelong career path. I began working with children.  Then I helped high school graduates apply to college and get financial aid. From there, I was elected to the Rio Hondo Community College Board in Whittier, then the California Assembly and eventually the U.S. Congress.

I wouldn’t be the nation’s first Latina Secretary of Labor—if it wasn’t for the summer work experiences I had growing up. That’s what summer jobs can do for young people—especially in underserved communities.

Exposing young people to the workplace through Summer Jobs+ is so important. There’s no substitute for the real world experience of showing up for work and there’s no replacement for the dignity that comes with earning your first paycheck. The President and I believe that employing our youth is critical to a sustained and continued economic recovery, and that’s why we’re both so excited that since we announced the Summer Jobs+ initiative in January, more than 150 businesses, non-profit organizations and local leaders have stepped up.

Jamba Juice was one of the companies that did just that. They committed to hiring 3,500 young people at stores across the country. They’ve already exceeded that goal and may reach 5,000 before the end of the summer. In the D.C. area alone they hired 50 youth to fill new jobs at the three locations opening this week and are a great example of a growing company making smart investments to meet their expanding workforce needs.

Last year I visited their corporate headquarters outside of San Francisco along with members of the advanced culinary class at the nearby Treasure Island Job Corps program. For these students it was a chance to see the possibilities of a career in the food industry. For Jamba Juice, it was a chance to connect with their local community and build a pipeline of talented young people through a new internship program.

Together with partners like Jamba Juice, CVS, and the Boys and Girls Club, we’ve opened up more than 300,000 employment opportunities for young people so far this summer – including more than 100,000 paid positions. But our work is far from done and summer is far from over.

Whatever you do, take advantage of the opportunities out there. I’ve lived the story. I know what a summer opportunity can lead to.