Honoring Leaders in the Fight Against Youth Homelessness

July 13, 2012 at 1:24 PM ET by Jon Carson
Twitter Facebook Email
Summary:
The White House honors 13 Americans who are committed to ending child and youth homelessness as Champions of Change 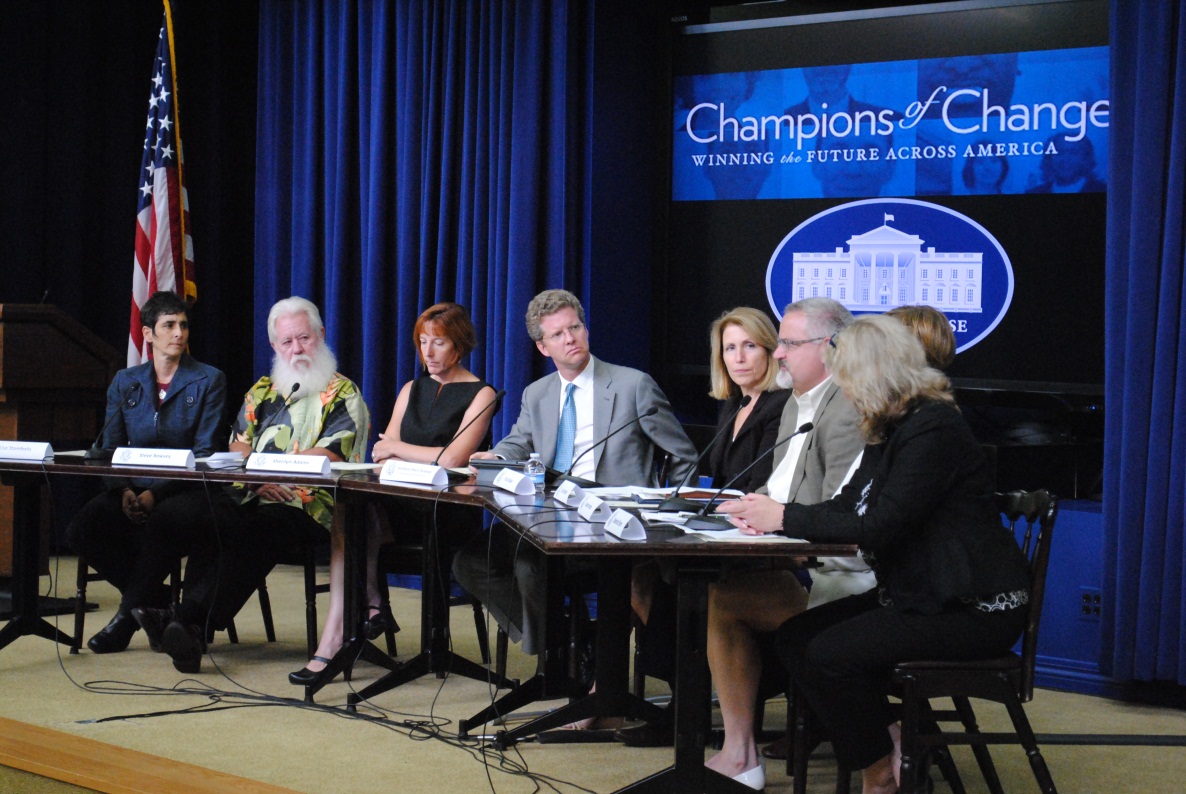 Secretary of Housing and Urban Development Shaun Donovan (middle) moderates a panel of Champions of Change who have made a difference in the way their communities combat youth homelessness, July 12, 2012. (Photo by the White House Office of Public Engagement)

Yesterday, I participated in a Champions of Change event here at the White House highlighting the inspiring work of 13 leaders in the effort to end child and youth homelessness. This program, hosted by the White House in partnership with the United States Interagency Council on Homelessness (USICH), featured Champions from across the country who were nominated through a public nomination process by colleagues, friends, and community members. Barbara Poppe, the Executive Director of USICH, introduced the Champions and noted that they “exemplify the spirit of collaboration [and] commitment to diversity, and have demonstrated that innovative strategies, coupled with unwavering commitment, can produce measurable results when serving children and youth experiencing homelessness in their communities.”

Department of Housing and Urban Development Secretary Shaun Donovan spoke about his experience volunteering at a homeless shelter in college and described the tremendous progress that has been made since then in the fight against youth homelessness. He also spoke about Opening Doors, the nation’s first ever comprehensive Federal Strategic Plan to Prevent and End Homelessness. 19 federal agencies are cooperating to achieve the goal of ending homelessness, but Secretary Donovan emphasized that the progress we are seeing would not have happened without the work being done in communities across the country by these Champions of Change and others like them.

After the Secretary’s remarks, each of the 13 Champions spoke on panels moderated by Secretary Donovan and Bryan Samuels, Commissioner of the Administration on Children, Youth and Families. The Champions discussed their challenges and successes, their goals for the future, and the philosophy they bring to work each day. Sparky Harlan, CEO of the Bill Wilson Center in Santa Clara, California, described her organization’s efforts to address not just youth homelessness, but youth and family homelessness, in order to stop the cycle of homelessness. Steve Bewsey, Director of Housing and Homelessness Services for Youth at LifeWorks in Austin, Texas, emphasized the importance of persistence and his work to provide a broad range of services for youth in his community. And Tim Baack, Executive Vice President of Pathfinders in Milwaukee, Wisconsin, spoke about the importance of asking the young people he works with what they want – and being willing to listen.

We honor Champions from a different field here at the White House each week, and hearing them speak about their work and the impact they are making in their communities is always one of the best parts of my week. We hope the work of these Champions inspires similar service across the country.

Learn more about this week’s Champions and past Champions at obamawhitehouse.archives.gov/champions, and watch a video of yesterday’s event below:

Jon Carson is the Director of the Office of Public Engagement.