From the Archives: A Landmark Moment for Americans with Disabilities

July 26, 2012 at 9:00 AM ET by Susan K. Donius
Twitter Facebook Email
Summary:
On July 26, 1990, America became the first country to adopt a comprehensive civil rights declaration for people with disabilities. 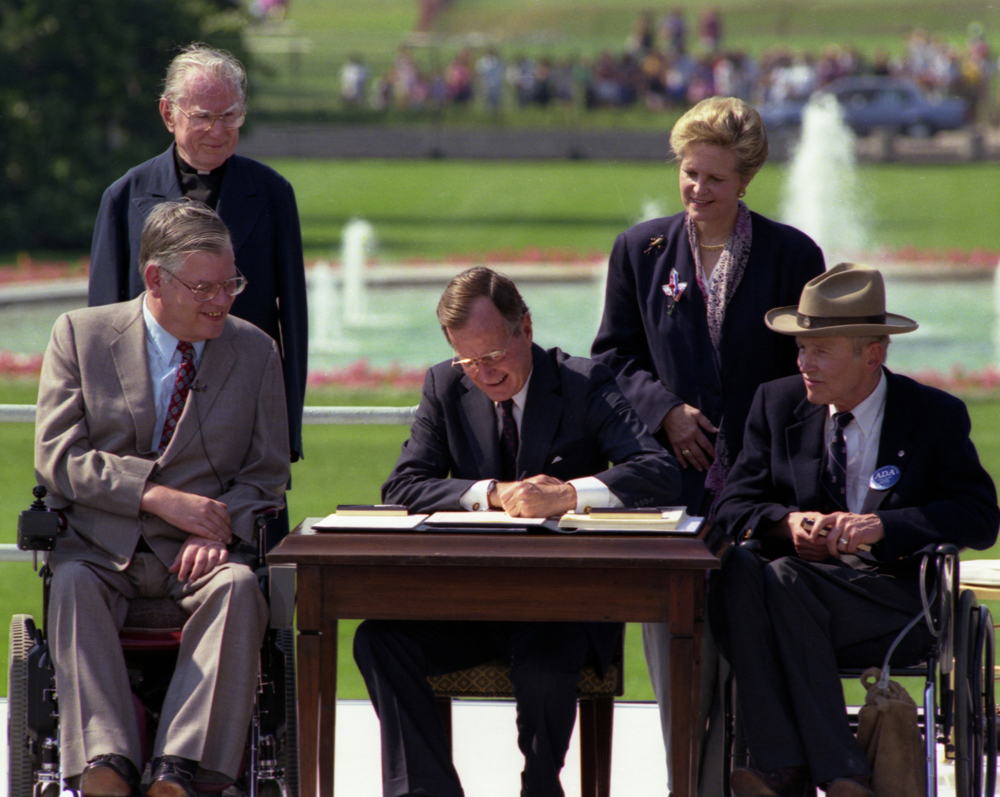 This year marks the twenty-second anniversary of the Americans with Disabilities Act (ADA). On July 26, 1990, President George H.W. Bush signed the Act into law on the White House South Lawn in front of an audience of 3,000 people. On that day, America became the first country to adopt a comprehensive civil rights declaration for people with disabilities. The ADA was a landmark moment in history, designed to provide universal accessibility in the areas of employment, public service, public accommodations, and telecommunications.

As President Obama noted in 2009 at the signing of the U.N. Convention on the Rights of Persons with Disabilities Proclamation, the ADA “was a formal acknowledgment that Americans with disabilities are Americans first, and they are entitled to the same rights and freedoms as everybody else: a right to belong and participate fully in the American experience; a right to dignity and respect in the workplace and beyond; the freedom to make of our lives what we will.”

Sierra Gregg is a second year intern in the Office of Presidential Libraries who recognizes the importance of sharing Presidential records related to disability history. She has been closely involved in a project to make a selection of these documents accessible to a wide audience. The following post is written by Sierra, about the Americans with Disabilities research page that is now available on the National Archives website. 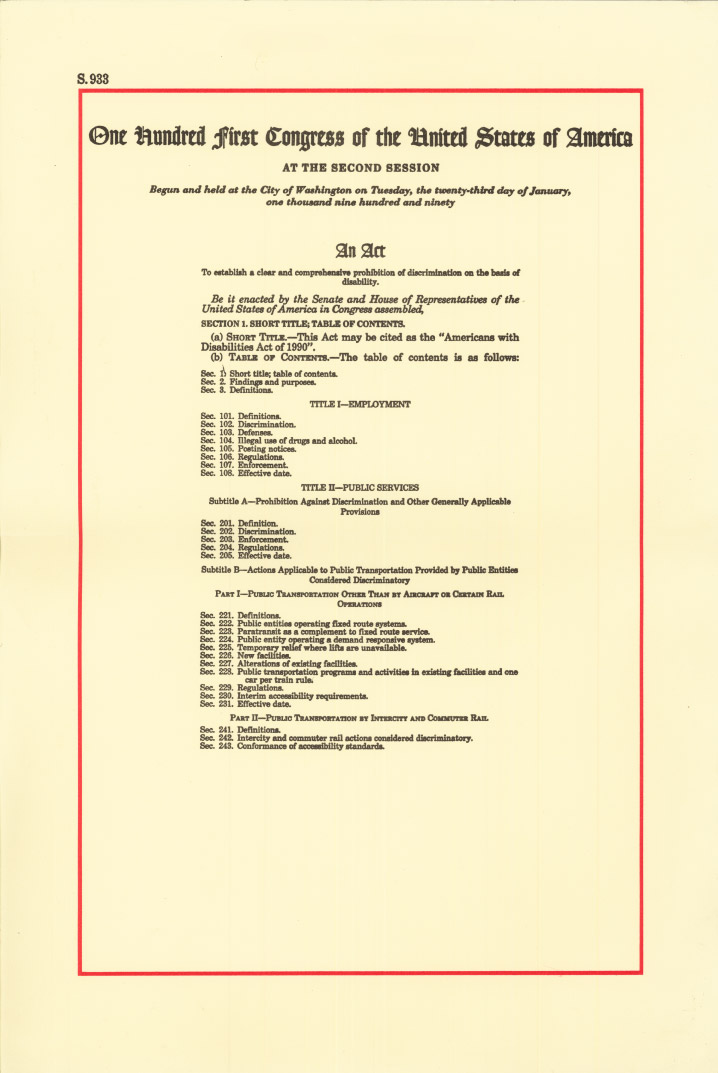 First Page of the Americans with Disabilities Act of 1990. Click to read Transcript.

I was born visually impaired one year after the signing of the ADA. I have grown up in a world where my visual impairment is not a hindrance to my success, only a characteristic of who I am. The ADA has made it possible for me to get the help I need to work toward my academic and professional goals.

However, the story of disability civil rights did not start with the ADA and it certainly did not end on that day 22 years ago. The efforts to ensure independence and equality for people with disabilities have a long and fascinating history. Over the course of two summer internships, I have worked on the Presidential Libraries team to collect a small sample of records related to Americans with disabilities. This collection will be added to the research topic section of the National Archives’ website and will contain at least one record from every Presidential administration since Herbert Hoover.

Although the collection contains records related to different disabilities, the records directly related to visual impairments are particularly meaningful to me. I believe my favorite record in the collection is a Braille letter written to President Dwight D. Eisenhower in 1956 by then-thirteen-year-old John Beaulieu. I first saw the letter on display in the Public Vaults exhibit of the National Archives in Washington, D.C. I still wish I could read the words with my fingers instead of just listening to the description. I was duly impressed that Beaulieu wrote the letter using a slate and stylus; I never quite mastered the art of using the slate. In order to write using the slate and stylus a thick piece of paper is placed face down in the slate, the stylus is used to punch out dots in the paper. The trick is every letter has to be written backwards so it can be read when the page is flipped. 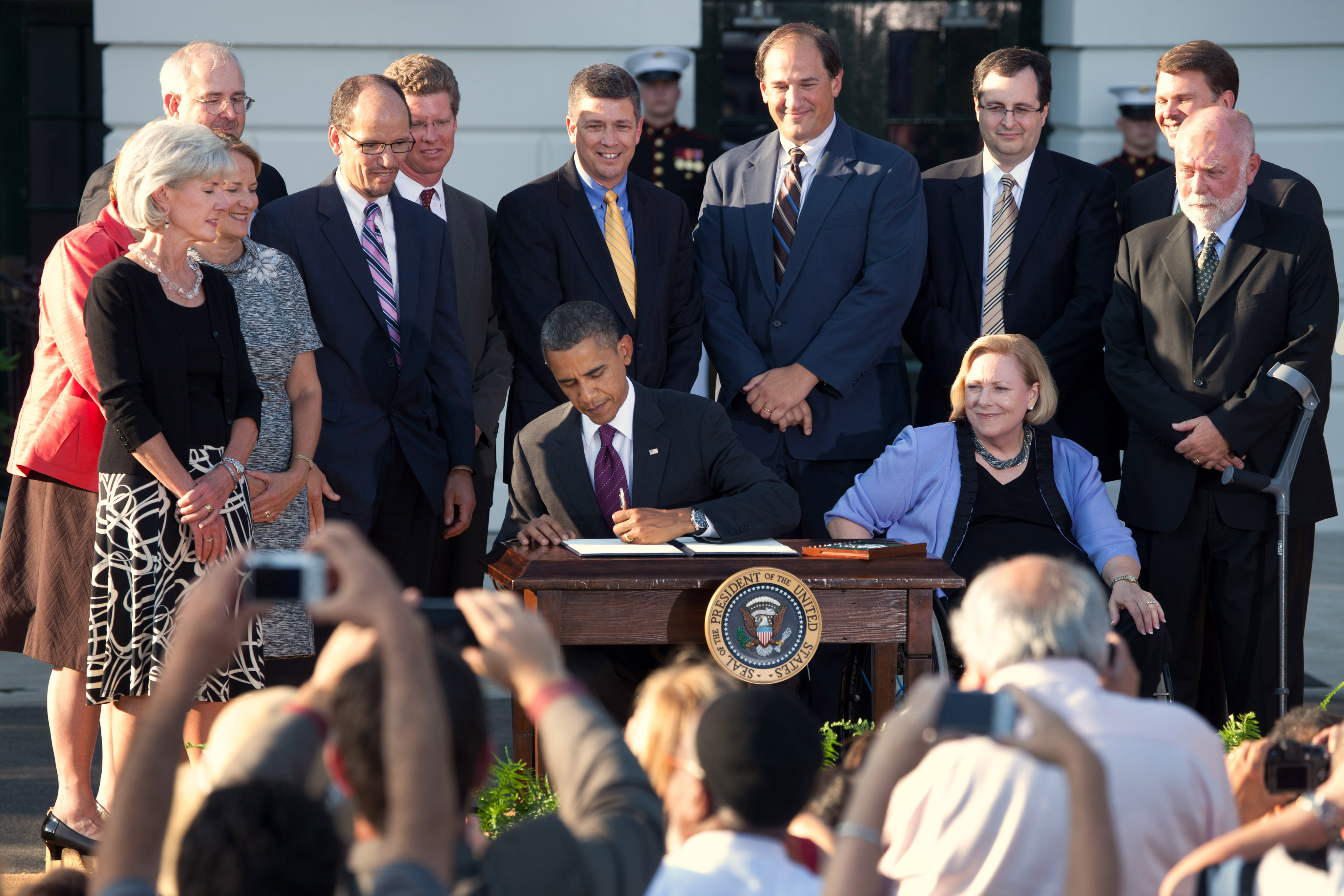 President Barack Obama signs Executive Order increasing federal employment of individuals with disabilities, during an event commemorating the 20th anniversary of the Americans with Disabilities Act on the South Lawn of the White House. July 26, 2010. (Official White House Photo by Chuck Kennedy)

The collection also contains two letters written to President Herbert Hoover by Helen Keller. She wrote letters to eight U.S. Presidents, starting in 1903 with Theodore Roosevelt. She also personally met with 13 Presidents from Grover Cleveland to Lyndon B. Johnson. I must admit to feeling a twinge of envy when I learned that during a visit to the White House she investigated her historic surroundings with touch. She even identified a bust of George Washington with her fingers.

The Americans with Disabilities research collection currently includes over fifty different records.  They range from Keller’s letters to President Hoover to photos of a White House dinner hosted by President Clinton honoring the Special Olympics. It’s a resource that will continue to grow, and one that sheds light on an important part of disability, and American, history.

More on the Americans with Disabilities research page from the Presidential Libraries here.

Susan K. Donius is the Director of the Office of Presidential Libraries at the National Archives and Records Administration.

Sierra Gregg is a senior at Truman State University in Missouri where she is studying Computer Science.  This year, she was awarded a scholarship from the National Federation of the Blind.