July 30, 2012 at 8:12 PM ET by Luis Miranda
Twitter Facebook Email
Summary:
In recognition of Colombian Independence Day, the White House hosts nearly 100 Colombian-American leaders for a policy briefing on both international and domestic issues, highlighting the strong relationship between the United States and Colombia as well as the important role Colombian-Americans are playing as a growing sector of the Hispanic community in the United States. 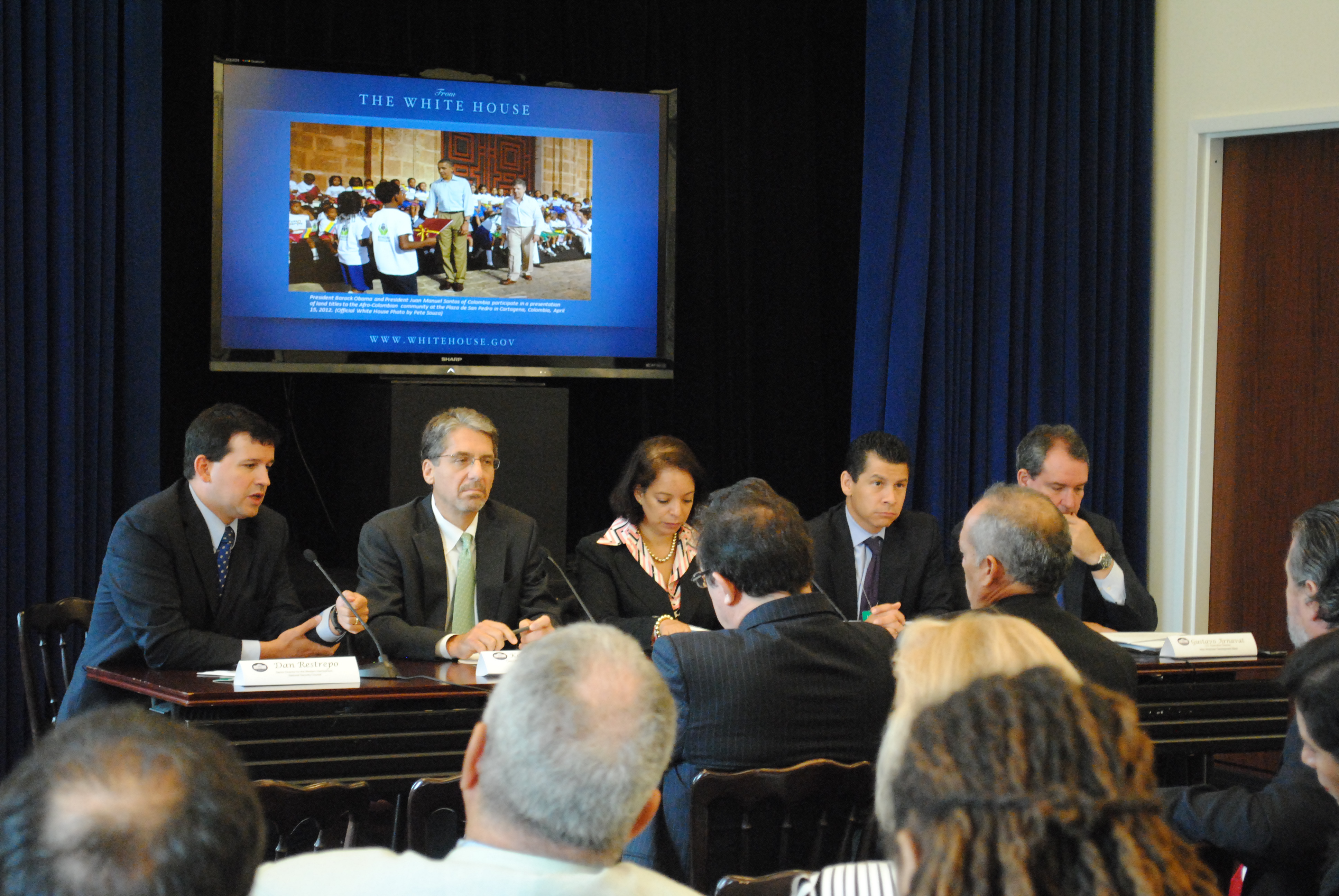 In recognition of Colombian Independence Day, the White House hosted nearly 100 Colombian-American leaders on Friday July 20, 2012 for a policy briefing on both international and domestic issues, highlighting the strong relationship between the United States and Colombia as well as the important role Colombian-Americans are playing as a growing sector of the Hispanic community in the United States.  As Secretary of State Hillary Clinton had stated about the 202nd anniversary of Colombia’s independence, “this year also marked a historic year in U.S.-Colombia relations as we reinforced our already strong relationship with the May 15 entry into force of the U.S.-Colombia Trade Promotion Agreement.”

Key White House and other Administration officials joined the Colombian-American participants for this important exchange. Ricardo Zuniga, the recently appointed Special Assistant to the President and Senior Director for Western Hemisphere Affairs in the National Security Staff, delivered welcoming remarks highlighting the importance of the relationship between the United States and Colombia, from our shared common values, to our long history dating back to Simon Bolivar and George Washington’s exchange on their common struggle for independence.  In addition to the important social and economic partnership, Zuniga also discussed President Obama and Colombian President Santos’ announcement of a high-level strategic security dialogue, and the extension of U.S. non-immigrant visas from 5- to 10 years, making it easier for more Colombians to visit the United States for business and pleasure.

Under Secretary of Commerce for International Trade Fráncisco Sanchez also participated, providing insights on opportunities and strategies for strengthening U.S.-Colombian ties through commerce and cooperation.  As described by President Obama in April 2011 while visiting Colombia for the Summit of the Americas – the U.S. Colombia Trade Promotion Agreement is a win-win for both countries and lays the foundation for greater commerce and cooperation. For American companies, the agreement alone will increase U.S. exports to Colombia by more than $1 billion, supporting thousands of American jobs and helping to achieve the President’s goal of doubling U.S. exports.  The agreement is also a win for Colombia by providing the Colombian people with even greater access to the largest market for its exports – the United States. Moreover, the agreement is also a win for workers in both countries, since it includes strong protections for workers’ rights to ensure a level playing field for U.S. workers and an Action Plan to address concerns over violence against labor activists in Colombia.

The Colombian-American leaders also participated in two panel discussions with Administration officials from the Small Business Administration, the State Department, the Inter-American Development Bank, the Department of Commerce, the Department of Education and Health and Human Services to name a few.  Community leaders were able to engage in a robust conversation about policies affecting businesses as well as the domestic policy agenda and its impact on the Latino community on issues like health care, education, and immigration. I had the pleasure of participating in one of the panel conversations, which was a unique experience not only as an Administration official but also as a Colombian-American who grew up in the community we were now hosting at the White House. The participants brought insightful questions about opportunities for growing and developing small businesses, the challenges the community faces to put young people on a path toward higher education, and the navigation of visa regulations. For me, one question that particularly stood out was about how to better engage young people in seeking a higher education, and the opportunities they should be pursuing. The cost of a higher-education can seem daunting to many young people, particularly in immigrant communities and among Hispanic students, nearly half of whom don’t finish high school on time. I recounted during the conversation how I had felt when I graduated from high school, overwhelmed at the thought of what college would cost and feeling like it wouldn’t be an option for me. In my case I came close to not going to college. That would have been a mistake, but one that is too often repeated. So we agreed to partner with community leaders to help bring more information to families in the community, particularly about efforts this Administration has worked on to increase access to Pell Grants and streamlining the application process for federal financial aid.

That exchange and others were marked by a recurring theme, the fact that the success of the Colombian-American community and the broader Hispanic community are inextricably tied to the success of our nation as a whole. So in her closing remarks, Cecilia Muñoz, the White House Director of the Domestic Policy Council, encouraged participants to continue to partner with our Administration, to continue the conversations begun at this gathering so that we can continue to work together to build an economy in which everyone gets a fair shot, everyone does their fair share, and hard work pays off.

Luis Miranda is Director of Hispanic Media in the White House Office of Communications.