Spreading the Word about Doing Business in Latin America

August 1, 2012 at 9:35 AM ET by Francisco Sánchez
Twitter Facebook Email
Summary:
Undersecretary of Commerce Francisco Sánchez discusses the role of Latin America as a key player in the U.S. export success story and it's integral role in the success of the National Export Initiative.

Ed. Note: This is a cross-post from the Department of Commerce International Trade Administration blog.

It’s been a busy couple of weeks. Just last week, I testified before the Senate Foreign Relations Subcommittee on African Affairs, chaired by Senator Robert Menendez (D-NJ) about new opportunities for trade that are emerging in Sub-Saharan Africa. Today, I testified in front of the Senate Foreign Relations Subcommittee on the Western Hemisphereabout the importance of trade with Latin American countries.

Two years ago, President Obama announced the National Export Initiative (NEI) with the goal of doubling U.S. exports by the end of 2014. The entire Department of Commerce, and especially everyone here at the International Trade Administration (ITA), has been working to make that goal a reality.

In 2011, U.S. exports reached a record $2.1 trillion in value, and supported 9.7 million jobs, an increase of 1.2 million compared to 2009. Throughout our economic recovery over the last three years, export related job growth has been a bright spot, proving that American products and services can compete anywhere around the world.

To keep this momentum going, we want to maximize opportunities available to all U.S. companies, large and small. That work leads us to Latin America. 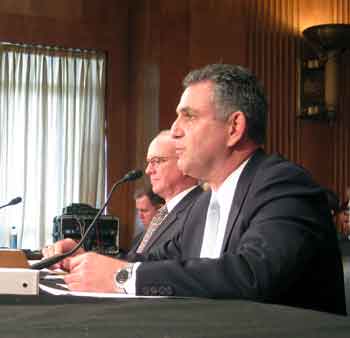 Under Secretary for International Trade Francisco Sánchez testifies at the Senate Foreign Relations Subcommittee on the Western Hemisphere about the importance of trade with Latin American countries. (Photo from the Department of Commerce)

President Obama has noted that the future of the U.S. is closely linked to the futures of our neighbors in Latin America.  Last year, U.S. merchandise exports to Latin America totaled $367 billion, representing an increase of 54 percent compared to 2009, faster than the 36 percent increase seen with the rest of the world. Clearly, Latin America is a key part of the U.S. export success story and is playing an integral role in the success of the NEI.

We are fully committed to helping maximize more opportunities in the region. Earlier this year, members of the Administration and private sector partners came together to participate in the CEO Summit of the Americas in Cartagena, Colombia. The President also recently announced that the United States and its partners extended an invitation to Mexico to join the Trans Pacific Partnership trade negotiations.

The United States has also passed trade agreements in Colombia and Panama that give U.S. companies more access to these important markets. The U.S.-Colombia Trade Promotion Agreement took effect on May 15th, and we are predicting that Colombia will spend $26 billion in the next four years on infrastructure projects, representing a huge opportunity for American businesses.

On a more personal level, ITA’s Commercial Service division has been working tirelessly to bring foreign buyers in contact with domestic supplies. For example, our Miami office helped a local supplier of oil and gas equipment secure a contract with Brazilian oil company, Petrobras. Our SelectUSA initiative also promotes the USA as the top destination for foreign capital. Mexico and Brazil are priorities in this effort because of their close proximity to America.

To keep up on further developments, visit our website, www.trade.gov, or follow our twitter account, @TradeGov. Increased trade will help continue the strong resurgence in American exporting we’ve seen since 2009 and help continue to provide good-paying jobs to millions of Americans. And that is a story worth sharing.

Francisco Sánchez is the Under Secretary for International Trade at the Department of Commerce.