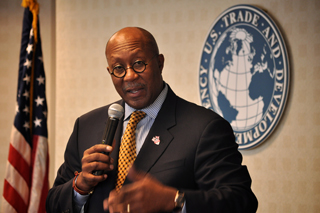 Ed. Note: This article was originally published on the USTDA Blog written by Thomas Hardy, USTDA Director for Congressional Affairs and Public Relations.

On Monday, the U.S. Trade and Development Agency hosted a forum for U.S. government interns in the international affairs arena. The forum provided a broad discussion of interagency collaboration to advance the foreign policy objectives of the United States and highlighted, in particular, the trade promotion strategy of the President's Export Promotion Cabinet.

Attended by over 100 interns from across the federal government, the forum was keynoted by U.S. Trade Representative Ambassador Ron Kirk and included remarks from USTDA Director Leocadia I. Zak, and Jon Carson, Director of the White House Office of Public Engagement.

"I was happy to meet with interns currently serving at federal trade agencies at the U.S. Trade and Development Agency's intern event. We talked about the current global trade climate, the state of the U.S. economy, and the trade challenges that our country will face in the years to come," said Ambassador Kirk. “It's always inspiring to engage with the young, talented, and energetic people that represent the next generation of leaders in the international trade and development field.”

The forum also included two panel discussions featuring representatives from the U.S. Departments of Commerce and State, the Office of the U.S. Trade Representative, the Export-Import Bank of the United States, the Overseas Private Investment Corporation, the U.S. Agency for International Development, and the Millennium Challenge Corporation.

"The forum was an excellent opportunity for interns to learn more about how U.S. government agencies work together to promote international development and support U.S. jobs," said Director Zak. "As importantly, the forum provided the students an invaluable experience to learn about different avenues in pursuing a career in public service."

In addition to highlighting the U.S. government's efforts to advance its foreign policy priorities, the forum focused heavily on how agencies work together to support U.S. companies exporting U.S. manufactured goods and services, creating high-paying jobs in America. The discussion also provided the summer interns a better understanding of the wide array of agencies involved in international affairs and diplomacy so they could gain insight into potential careers within the federal government after graduation.