August 4, 2012 at 5:34 AM ET by Kori Schulman
Twitter Facebook Email
Summary:
To celebrate three million Twitter followers, we want to hear from you! Tell us why you follow @WhiteHouse and check out a new behind the scenes video with President Obama answering questions on Twitter.

Today, the White House Twitter account reached 3,000,000 followers! The White House uses Twitter to connect with citizens around the country and keep our followers up-to-date on the latest news from the President and the Obama Administration. 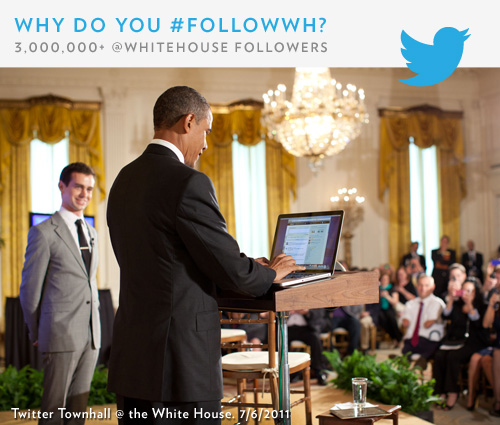 To celebrate 3,000,000 followers, we want to hear from you: Tell us why you follow @WhiteHouse. Let us know on Twitter with the hashtag #FollowWH. We'll highlight some of our favorite responses on WhiteHouse.gov.

From the first Twitter Town Hall at the White House to launching the Twitter Q&A series "Office Hours," we're continually looking for new ways to engage with Americans. Do you have feedback on how the White House uses twitter or ideas on what we can do better? Share them with us through this webform or on Twitter using the hashtag #WHWeb. We look forward to getting your feedback.

Take a look at some of our top Twitter moments over the years below or on Storify, and don't miss a new behind the scenes video with President Obama answering your questions on Twitter.

The White House uses Twitter to connect with citizens around the country and keep our followers up-to-date on the latest news from the White House. Check out some of our favorite moments on Twitter and let us know why you #FollowWH.

Thanks everyone for joining our 1st WH Office Hours. What'd you think of the #WHChat? Let us know how we can improve.The White House
October 19, 2011: First Lady Michelle Obama sendsher first tweet from @JoiningForces, calling on Americans to show their support military families, before Game One of the World Series in St. Louis.
The First Lady's First Tweetwhitehouse
December 2011: People around the country use the hashtag#40dollars to speak out about the importance of extending the payroll tax cut andyour voices made all the difference.
Thanks to all who shared #40dollars stories. Today's victory is yours. Keep making your voices heard – it makes all the difference. –boThe White House
Why Your Voice Matterswhitehouse
January 2012: Following the State of the Union Address, the White House hosts a Twitter Office Hours marathon with more than 30 administration officials answering questions from people around the country. The State of the Union Twitter Q&A series marks Vice President Biden's first Twitter interview.
PHOTO: VP kicking off his 1st live @Twitter chat in #NewHampshire earlier today http://pic.twitter.com/Bs1FKb2vOffice of VP Biden
May 24, 2012: President Obama participates in a surprise Q&A on Twitter focused on his to-do list for Congress to create jobs.
Let's try this: After I speak here in Iowa about clean energy jobs, I'll answer a few questions on #CongressToDoList. Ask w/ #WHChat -boThe White House
Behind-the-Scenes Video: Twitter Q&A with President Obamawhitehouse
June 2012: Young people all over the country use the hashtag#DontDoubleMyRate and make their voices heard to prevent interest rates on student loans from doubling.
Why Your Voice Matters - #Dontdoublemyratewhitehouse

Already following @WhiteHouse? Be sure to check out all of our official accounts: