Curiosity Takes Us Back to Mars

August 6, 2012 at 10:30 AM ET by Charles Bolden
Twitter Facebook Email
Summary:
NASA lands the Curiosity Rover on Mars, where it will investigate whether conditions have favored development of microbial life on the Red Planet

Ed. Note: This article is crossposted from NASA's blog

The Mars Science Laboratory (MSL) team in the MSL Mission Support Area react after learning the the Curiosity rove has landed safely on Mars and images start coming in at the Jet Propulsion Laboratory on Mars, Sunday, Aug. 5, 2012 in Pasadena, Calif. The MSL Rover named Curiosity was designed to assess whether Mars ever had an environment able to support small life forms called microbes. August 5, 2012. (by NASA/Bill Ingalls)

NASA is back on Mars – and getting ready for the next mission to the Red Planet! After an astounding 154 million mile journey and a harrowing landing that demonstrated cutting-edge technology, Curiosity, the largest rover ever sent to another planet, is in place and ready to work. This robotic laboratory will seek answers to one of humanity’s oldest questions as it investigates whether conditions have favored development of microbial life on the Red Planet. The mission is a critical planetary science mission -- and a precursor to sending humans to the Red Planet in the 2030’s, a goal set forth by President Obama.

It’s another great leadership moment for our nation and a sign of the continued strength of NASA’s many programs in science, aeronautics and human spaceflight. It’s also important to remember that the $2.5 billion investment made in this project was not spent on Mars, but right here on Earth, supporting more than 7,000 jobs in at least 31 states.

With the retirement of the Shuttle program after its final flight in July 2011, some have suggested that NASA’s leadership in the exploration of space, including our extraordinary successes on Mars, was coming to an end. Nothing could be further from the truth. The Curiosity mission is only the latest in a long list of extraordinary NASA missions that established the United States as the undisputed world leader, and it will help guarantee that remains the case for many years to come.

When our Orion deep space crew vehicle takes its first test flight in 2014, it will travel farther into space than any spacecraft designed for humans has flown in the 40 years since our astronauts returned from the moon. 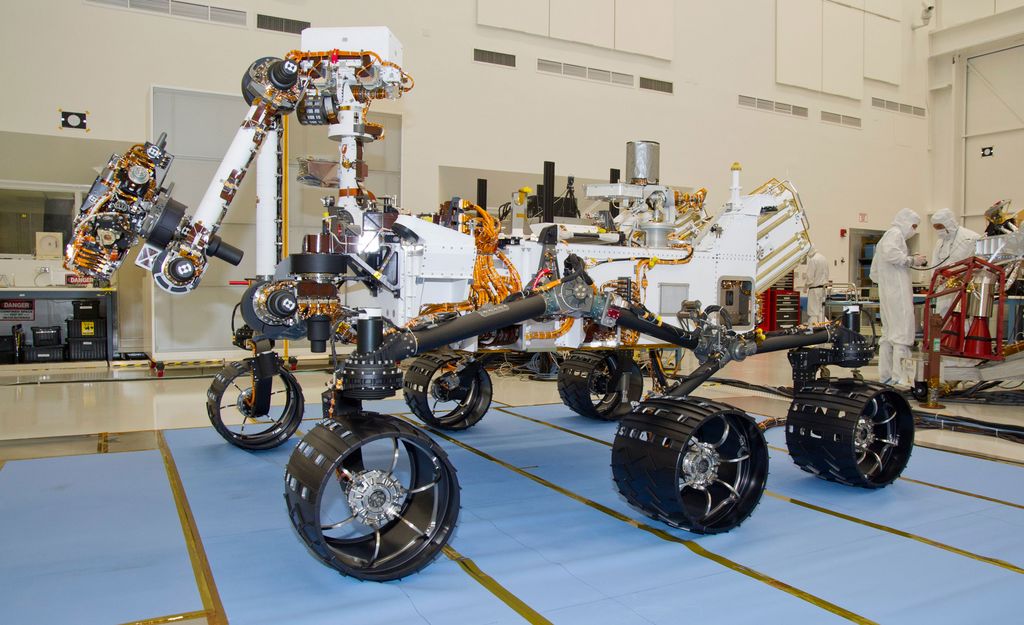 This photograph of the NASA Mars Science Laboratory rover, Curiosity, was taken during mobility testing on June 3, 2011. The location is inside the Spacecraft Assembly Facility at NASA's Jet Propulsion Laboratory, Pasadena, Calif. (Photo courtesy of NASA)

In 2017, NASA’s Space Launch System (SLS), a heavy-lift rocket that will provide an entirely new capability for human exploration beyond low Earth orbit, will launch Orion.

We also reached a critically important milestone in May when SpaceX became the first private company to send a spacecraft -- the Dragon cargo capsule -- to the International Space Station and return it with cargo intact. This successful mission ushered in a new era in spaceflight -- and signaled a new way of doing business for NASA. And just a few days ago, we announced the next step in the Obama Administration’s aggressive plan to once again launch our astronauts from U.S. soil on spacecraft built by American companies.

As part of our commitment to maintain American leadership in the exploration of Mars beyond the Curiosity mission, NASA will launch the Mars Atmosphere and Volatile EvolutioN (MAVEN) orbiter next year. Earlier this year, I directed NASA’s science mission director, along with the head of human exploration, Chief Technologist, and Chief Scientist to develop a more integrated strategy to ensure that the next steps for Mars exploration will support the nation’s planetary science objectives as well as our human exploration goals. They are looking at many options, including another robotic mission to land on Mars in this decade.

I am so proud of the NASA team that has made tonight’s challenging milestone possible. However, tomorrow we begin to plan for the next great challenge -- and start compiling incredible scientific data from Curiosity. For the past 50 years, NASA has specialized in doing the hard things. Thanks to the ingenuity of our teams across America and the world, we are poised for even greater success.

For more information about Curiosity and NASA's missions to Mars, visit: http://www.nasa.gov/mars

Charles Bolden is the NASA Administrator.