August 10, 2012 at 11:09 AM ET by Bobby Dresser
Twitter Facebook Email
Summary:
Sophie Lebrecht is a joint post-doctoral researcher in the Center for the Neural Basis of Cognition (CNBC) and the Tepper School of Business at Carnegie Mellon University (CMU). She is also an entrepreneur, thanks to the National Science Foundation’s Innovation Corps (or I-Corps), a program created to allow researchers the opportunity to apply their research to the commercial world. I talked with Lebrecht about I-Corps and her experience as a scientist-turned-entrepreneur. 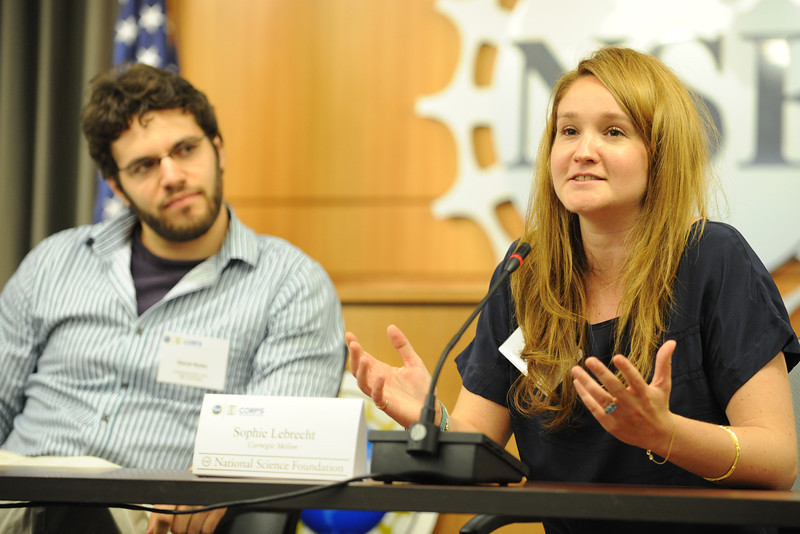 Sophie Lebrecht is a joint post-doctoral researcher in the Center for the Neural Basis of Cognition (CNBC) and the Tepper School of Business at Carnegie Mellon University (CMU).  She is also an entrepreneur, thanks to the National Science Foundation’s Innovation Corps (or I-Corps), a program created to allow researchers the opportunity to apply their research to the commercial world. By pairing researchers with entrepreneurs and business mentors who provide resources and expertise, I-Corps helps scientists and engineers take their work from the lab to the market.

In 2011, Dr. Lebrecht published her research, supported by the National Science Foundation’s Temporal Dynamics of Learning Center, on how the brain uses visual information to create signals that inform decision making. In short, Lebrecht studied how what we see affects what we do. She was quickly aware that her research could be useful to any company vying for consumers’ attention in today’s image-cluttered world. Today, thanks in part to I-Corps’ support, Lebrecht is about to launch Neon Labs, a startup that uses algorithms derived from her research to identify the still frame from a video that is most attractive to the viewer. With this technology, any media or video-hosting platform could apply her research to drive video traffic and attract users. I talked with Lebrecht about I-Corps and her experience as a scientist-turned-entrepreneur.

What inspired you to make the transition from research in a lab to creating a startup?

I was the lead on this project—it was my PhD work—and Michael Tarr, my PhD advisor, was also integrally involved. We looked at the data from our study and thought, “Wow, we’ve actually hit on something that is incredibly useful.” I mean, think of how many people would want to be able to predict what visual information is going to lead to what decision! I just felt like I should get it out of the lab.

How did you find I-Corps, and how did they help you get your research out of the lab?

When I-Corps came along it was a perfect fit for us. They sent out a call for proposals, and we responded. The NSF has to have funded your basic research. So I was working in the Temporal Dynamics of Learning Center (a research center supported by the National Science Foundation), and this initial project had started because I was awarded an independent graduate student grant – so I studied the signals that inform our decision-making at a visual stage. And NSF supported my project as a graduate student, as a post-doc, and now they’ve supported the beginnings of this commercialization. So NSF has really taken this from the very first idea I had right through to finding a market for its commercial application. It’s really powerful. The other thing is, NSF’s support has been not just financial: Errol Arkilic and David Croson, who were the NSF people I worked closely with, their contribution and guidance is really why we came out the other side with an awesome product and an awesome application.

And what about the balance between researcher and entrepreneur? Was it hard coming from research science to starting a business, and how did I-Corps help?

Right now, I am a post-doc at the Tepper School of Business at CMU. But when I started my project and first got involved with I-Corps, I had no business expertise—I was as science as it gets; I had been in a cognitive science lab at Brown for five years.

One of the things I think is really neat is this idea of “customer development.” You set a hypothesis, you get out of the lab to test whether that hypothesis is correct by talking to potential customers, then you validate that. If you think it makes sense, and if your teachers think it makes sense, you move forward with the hypothesis. It’s funny, because as a PhD you have a lot of the skill sets. You don’t have all of them, but you have a lot of resilience, a lot of self-motivation and drive, and a lot of problem-solving skills. When we hit on the field of online video, I-Corps said “Great, your technology could fit here, but figure out a business model.” Well, the way the money flows through online video—through advertising, video hosting platforms, publishers—is crazy, but I sat down with my PI [principal investigator], and we realized that it’s just a dynamical system: there are inputs, there are outputs, there’s a flow.

The fantastic thing about going through this journey with NSF is that they know what your skill set is coming in. So they know you can problem solve, they know you can test hypotheses, they know you can think through systems. But they also know what’s hard for you, like how to talk about complex science in a way that’s easily accessible, and so on. For me, one of the biggest challenges was thinking about revenue and other aspects of the business side of things. Like, coming up with value propositions and adapting your science into a product, I think, is very ideas-based, and PhDs may have those skills. But other things are harder.

The last thing with NSF is that you trust them to begin with. And since it’s completely new, you have to be pretty brave to say to your colleagues and peers that you’re going to take your basic science and commercialize it. When you do that in conjunction with an institution you trust and everybody trusts, it becomes much less scary.

Is there a certain satisfaction in seeing your research applied to the real world?

Neon right now is about predicting the best or the most visually appealing thumbnail to use to represent online video. Now, if every big video platform had a little sign at the bottom that said “thumbnails selected by Neon,” and I knew that algorithm that was getting increased click rates came from the basic science that I spent five years figuring out in the lab—that, to me, would be amazing.

To learn more about the Obama Administration’s efforts to fuel entrepreneurship across the country, check out the White House Startup America Initiative.

Bobby Dresser is a student volunteer at OSTP.