Honoring the Victims of the Oak Creek Tragedy

August 14, 2012 at 10:15 AM ET by Gautam Raghavan and Paul Monteiro
Twitter Facebook Email
Summary:
On August 5, 2012, a 40-year-old man entered a Sikh gurdwara in Oak Creek, Wisconsin shortly before Sunday services and opened fire, resulting in the deaths of six people.

On August 5, 2012, a 40-year-old man entered a Sikh gurdwara in Oak Creek, Wisconsin shortly before Sunday services and opened fire, resulting in the deaths of six people. The investigation into this issue is still ongoing.

That day, the President convened a call with FBI Director Bob Mueller, Chief of Staff Jack Lew, and Homeland Security Advisor John Brennan to receive an update on the tragic shooting in Oak Creek, Wisconsin. During the briefing, the President directed that the federal government assist as appropriate in the investigation into the shooting. Following that briefing, the President called Wisconsin Governor Scott Walker, Oak Creek Mayor Steve Scaffidi, and trustee of the Sikh gurdwara Charanjeet Singh to express his condolences for the lives lost and his concern for those who were injured.

Also on August 5, the President released the following statement:

Michelle and I were deeply saddened to learn of the shooting that tragically took so many lives in Wisconsin. At this difficult time, the people of Oak Creek must know that the American people have them in our thoughts and prayers, and our hearts go out to the families and friends of those who were killed and wounded. My Administration will provide whatever support is necessary to the officials who are responding to this tragic shooting and moving forward with an investigation. As we mourn this loss which took place at a house of worship, we are reminded how much our country has been enriched by Sikhs, who are a part of our broader American family.

On August 6, the President issued a Presidential Proclamation honoring the victims of the tragedy in Oak Creek and ordering that the flag of the United States shall be flown at half-staff until August 10, 2012. And at a bill signing event, the President responded to a question from reporters about the incident:

If it turns out, as some early reports indicate, that it may have been motivated in some way by the ethnicity of those who were attending the temple, I think the American people immediately recoil against those kinds of attitudes, and I think it will be very important for us to reaffirm once again that, in this country, regardless of what we look like, where we come from, who we worship, we are all one people, and we look after one another and we respect one another.

Also on August 6, staff from the White House and the White House Initiative on AAPIs participated on a community conference call with over 80 community based organizations as well as an Incident Community Coordination Team conference call convened by the Department of Homeland Security. The purpose of these calls was to offer timely support and assistance to community leaders, and solicit their feedback.

In addition, the United States Attorney for the Eastern District of Wisconsin, James Santelle, spoke about the incident at a press conference and highlighted ongoing efforts by law enforcement to ensure the continued safety of the Sikh gurdwara in Oak Creek and the broader Oak Creek community:

That kind of commitment will continue today, tomorrow and the weeks ahead and the months ahead and in the years ahead, and the Sikh community should know that we remain committed to ensuring your safety and your security here in Oak Creek and around the nation. That is the commitment of this Attorney General, of this President and of all of us in federal, state, local and tribal government here in the state of Wisconsin. 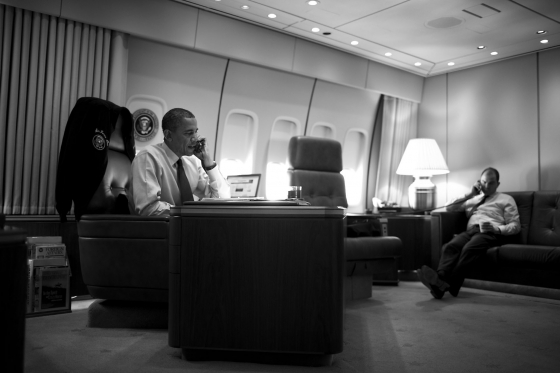 President Barack Obama talks on the phone with Prime Minister Manmohan Singh of India aboard Air Force One during a flight to Colorado, Aug. 8, 2012. The President called Prime Minister Singh to express condolences for victims of the attack at the gurdwara in Wisconsin, which took the lives of Indian nationals as well as Americans, and to convey the solidarity of the American people. Ben Rhodes, Deputy National Security Advisor for Strategic Communications, is seated at right. (Official White House Photo by Pete Souza) August 8, 2012. (by Official White House Photo by Pete Souza)

On August 8, the President placed a call to Dr. Manmohan Singh, the prime minister of India, to express his condolences for the victims of the attack, which took the lives of Indian nationals as well as Americans. President Obama reiterated that the Sikh community is an essential and vibrant part of the American family. The President also underscored that the incident is particularly tragic because it took place in a house of worship. Prime Minister Singh expressed his gratitude for the many messages and gestures of support from the United States, and for the prompt reaction and heroism of the local police department.

On August 9, United States Attorney James Santelle and the Community Relations Service of the Department of Justice organized a community-wide gathering with representatives of the Sikh Temples in Oak Creek and Brookfield, leaders of the local, regional, and national Sikh organizations and associations, officials of federal, state, and local government, including law enforcement, and others.

On August 10, Attorney General Eric Holder delivered remarks at the memorial service for the Oak Creek victims. In opening his remarks, the Attorney General described the many contributions of the Sikh community in America:

This is the idea that – no matter where you come from or how you worship – once you are here, you are part of the American family. And this also is the story of the Sikh community in our country – a community that has contributed in innumerable ways to the greatness of America.

These were the early immigrants who came to the West Coast in the late 19th and early 20th centuries to work in lumber mills, on railway lines, and as agricultural laborers – and who stayed, building and strengthening communities around the country, from Yuba City to New York City, from Miami to Milwaukee, to Washington, D.C.

There are public servants like Dalip Singh Saund, the first Asian American ever elected to Congress; and Bhagat Singh Thind, a hero who fought for America in World War I, and then fought to become a U.S. citizen.

We are talking about our neighbors and co-workers, our brothers and sisters, and the members of our American family – and of the Oak Creek community – who we remember today.

In closing his remarks, the Attorney General spoke about the Obama Administration’s commitment in the coming days:

Today, I wish that I could give each of you – as well as every member of our nation's Sikh community; and every other member of our American family – the peace that you seek. I can’t do that.

But I can make you a promise. I want you to know that your loss will fuel the ongoing work – being led by this Administration, by our nation's Department of Justice, and by our law enforcement community – to seek both answers and justice, to advance the investigation that's now underway, to identify and implement the solutions that we need to prevent future tragedies, and to build on the unprecedented steps that have been taken to respond to threats – and to prevent violence and discrimination – aimed at our Sikh and other religious communities.

Protecting the safety and civil rights of every person in this country – in our schools and neighborhoods, in our workplaces and houses of worship – must, and will, remain a top priority for me and for all those who serve the American family.

This is the diversity that makes us Americans; the pluralism that we will never lose.

And at times, we have to admit that this spirit is threatened.  We’ve seen instances of mosques and synagogues, churches and temples being targeted.  Tonight, our prayers, in particular, are with our friends and fellow Americans in the Sikh community.  We mourn those who were senselessly murdered and injured in their place of worship.  And while we may never fully understand what motivates such hatred, such violence, the perpetrators of such despicable acts must know that your twisted thinking is no match for the compassion and the goodness and the strength of our united American family.

So tonight, we declare with one voice that such violence has no place in the United States of America.  The attack on Americans of any faith is an attack on the freedom of all Americans.   No American should ever have to fear for their safety in their place of worship.  And every American has the right to practice their faith both openly and freely, and as they choose.

That is not just an American right; it is a universal human right.  And we will defend the freedom of religion, here at home and around the world.  And as we do, we’ll draw on the strength and example of our interfaith community, including the leaders who are here tonight.

We will continue to monitor this situation closely and provide regular updates. In the meantime, don’t hesitate to provide feedback by email to AAPI@who.eop.gov or consult the following Federal government resources:

Gautam Raghavan are Paul Monteiro are Associate Directors in the White House Office of Public Engagement.