August 22, 2012 at 4:55 PM ET by Brad Cooper
Twitter Facebook Email
Summary:
First Lady Michelle Obama announces that 2,000 companies have hired or trained an amazing 125,000 veterans and military spouses in the past year through Joining Forces. 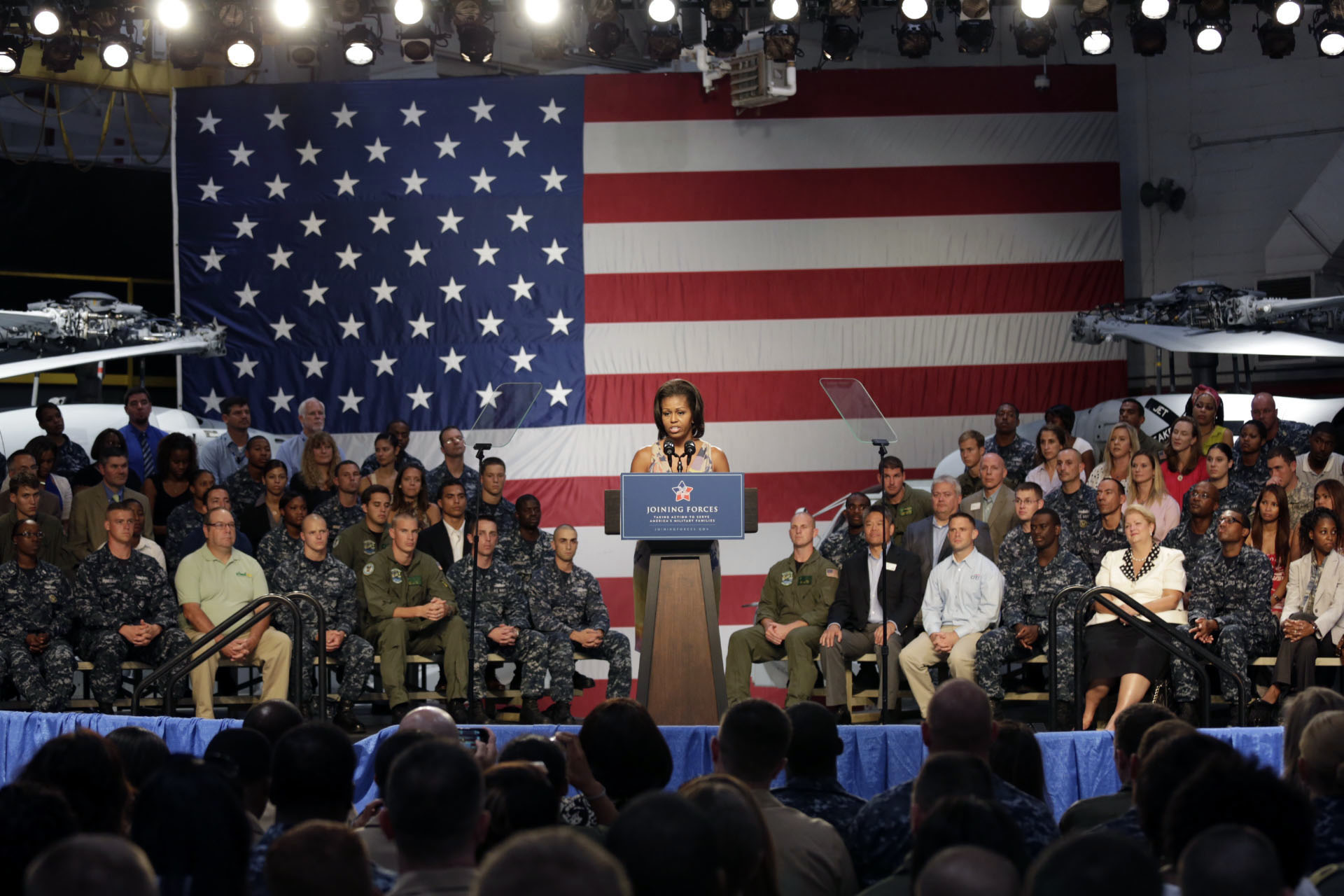 Earlier today, I joined with First Lady Michelle Obama at Naval Station Mayport near Jacksonville, Florida as she announced that 2,000 companies had hired or trained an amazing 125,000 veterans and military spouses in the past year through Joining Forces.

This effort, combined with policies and legislation put in place by the President have resulted in a 20 percent decrease in veteran unemployment compared to this time last year.

It was an extraordinary event, set among several Navy Seahawk helicopters, that kicked off with a new Joining Forces video telling the story of how we got to today's announcement. Hundreds of Sailors from on Navy's premier warships and helicopter squadrons were in attendance along with their families.

The Chief of Naval Personnel, Vice Admiral Scott Van Buskirk, was there and delivered inspiring remarks.

Leaders of businesses who have been hiring literally thousands of veterans were there -- and they brought with them veterans and spouses who they hired in the past year.

As several of the veterans told me, Joining Forces has made a significant impact on their lives.

Paul Andrews, a Navy veteran, introduced the First Lady.  Originally from Texas, Paul joined the Navy and was trained as a sonar technician, where he learned to operate, maintain and repair the Navy’s most sophisticated equipment designed to detect and track the world’s most stealthy submarines. While in the Navy, he was assigned to the Guided Missile Destroyer USS ROOSEVELT, based right here in Mayport. He deployed twice including a 9-month deployment in eastern Afghanistan after volunteering for duty on a Provincial Reconstruction Team.

Earlier this year, Paul transitioned back to civilian life, where he is applying the skills he learned in the Navy into the private sector after landing a job with a company called Sonardyne at a Joining Forces-Orion International hiring event right here in Mayport.

Companies like Orion are among more than 2,000 in America who have made commitments on veteran and military spouse hiring through Joining Forces.

We know that America’s post 9/11 veterans have the skills to help lead America’s economic recovery.

If you can operate hi-tech sonar equipment like Paul did, or if you can work with sophisticated radars that guide high-speed missiles into outer-space, then you’re ready to succeed in our high-tech industries right here in America. Or if you can repair a helicopter engine like those we saw in Mayport or you can coordinate thousands of pounds of supplies being delivered to villages in Afghanistan, then clearly you have what it takes for a manufacturing or logistics job right here in the U.S.

The First Lady often says that Joining Forces will be a success if military families feel the support that they deserve. Two thousand businesses hiring 125,000 veterans and military spouses is a great first step to serving our military families as well as they’ve served us.