August 28, 2012 at 1:13 PM ET by Secretary Ray LaHood
Twitter Facebook Email
Summary:
The Department of Transportation and the Environmental Protection Agency finalize national standards for fuel economy and greenhouse gas emissions for passenger cars and light trucks that will, by 2025, nearly double the average fuel economy performance of cars on the road today. Ed. Note: This is cross-posted from The Fast Lane -- the official blog of the U.S. Secretary of Transportation.

This is a monumental day for the American people, the U.S. auto industry and the Obama Administration’s efforts to make our cars more efficient. Today, DOT and the Environmental Protection Agency are finalizing national standards for fuel economy and greenhouse gas emissions for passenger cars and light trucks built in the years 2017 through 2025.

Thanks to their work, the car or light truck you'll be driving in 2025 will not be your grandfather's Oldsmobile. The Administration’s combined fuel economy efforts represent the first meaningful update to fuel efficiency standards in decades. By 2025, the average car will achieve a fuel economy performance equivalent to 54.5 miles per gallon, nearly double that of cars on the road today. 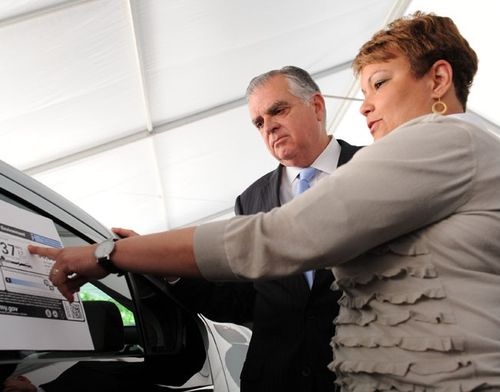 This will help American families keep more of their hard-earned paychecks into their pockets and spend less at the pump while still preserving the features and vehicle choices consumers want. In total, the Administration’s national program to improve fuel economy and reduce greenhouse gas emissions will save consumers more than $1.7 trillion on gas over the lifetime of a 2025 vehicle.

President Obama understands that when Americans have the option of using less fuel, everybody wins. As our cars become more efficient, we spend less money refilling them, we preserve a crucial resource, and we reduce harmful carbon emissions. And he's exactly right. Consumers have already responded to the Administration's fuel efficiency standards for Model Years 2011 through 2016, and it shows in the popularity of cars like GM's Chevy Cruze and trucks like the Ford F-150 equipped with an EcoBoost engine instead of the conventional V-8.

The American automobile industry wins as well. With today’s rule, we have given American manufacturers the regulatory certainties they need to build efficient cars of all types that consumers want today and in the future. That's why our rule has the support of 13 major automotive manufacturers, who build 90% of the cars sold in the U.S.

We’ve worked with the auto industry--as well as environmental groups, consumer groups and state governments--to develop the rule, so we know that America's carmakers are ready for these new standards. Many of the tools and technologies that will help them comply with these standards already exist, and we expect automakers to develop even more innovative approaches in the future.

Americans will still have the option of buying the kind of vehicle they want--whether it’s a truck, SUV or smaller sedan. At the same time, these new standards will promote innovation and lead to new technologies. And that means even more consumer choices, new jobs, and even new industries.

It also means cleaner air and an opportunity to lessen our role in climate change. As EPA Administrator Lisa Jackson said, “The fuel efficiency standards the administration finalized today are another example of how we protect the environment and strengthen the economy at the same time.”

Finally, throughout the rule-making process, safety has remained our guiding principle, and it will continue to be our number one priority. We have concluded that manufacturers can meet these standards without sacrificing vehicle safety.

Simply put, this groundbreaking program will result in vehicles that use less gas, travel farther, and provide more efficiency for consumers than ever before—all while maintaining safety, protecting the air we breathe, and laying the groundwork for automakers to create jobs, develop advanced technologies, and improve quality of life for America's families.

In energy and emissions, our nation faces two serious challenges, but we don't shy away from challenges. With these new standards, its all-of-the-above energy approach, and a range of other initiatives, the Obama Administration is stepping up to the plate and meeting those challenges head-on.