The Red Flag Campaign on Campus

August 29, 2012 at 12:00 PM ET by Grace O'Malley
Twitter Facebook Email
Summary:
The Red Flag Campaign is a public awareness initiative designed to prevent dating violence by teaming up with colleges and universities across America. Established in 2005 by the Virginia Sexual and Domestic Violence Action Alliance, the campaign has since spread to more than 100 campuses in 27 states.

Ed. note: This is our kick-off post of the “Campus Spotlight” blog post series, which will share what extraordinary teens and young adults have been doing to help end dating violence across the country and highlight ways YOU can be a strong advocate. This series will feature some of the young people, schools, and organizations that have been working hard to spread awareness, provide resources, and prevent dating violence on their campuses and in their communities.

The Red Flag Campaign is a public awareness initiative designed to prevent dating violence by teaming up with colleges and universities across America. The campaign was created in 2005 by the Virginia Sexual and Domestic Violence Action Alliance. It has since spread to more than 100 campuses in 27 states.

Red Flag Campaign Coordinator Kate Mccord explains, “The campaign uses a bystander intervention strategy—encouraging friends and other campus community members to say something when they see warning signs (“red flag”) for dating violence.” McCord believes that “The bystander intervention strategy sets The Red Flag Campaign apart from other strategies by engaging men as allies in the work to end dating violence. It recognizes and affirms that men are invested in the well-being of their friends and partners and are a critical component to changing attitudes and behaviors that lead to dating violence.” 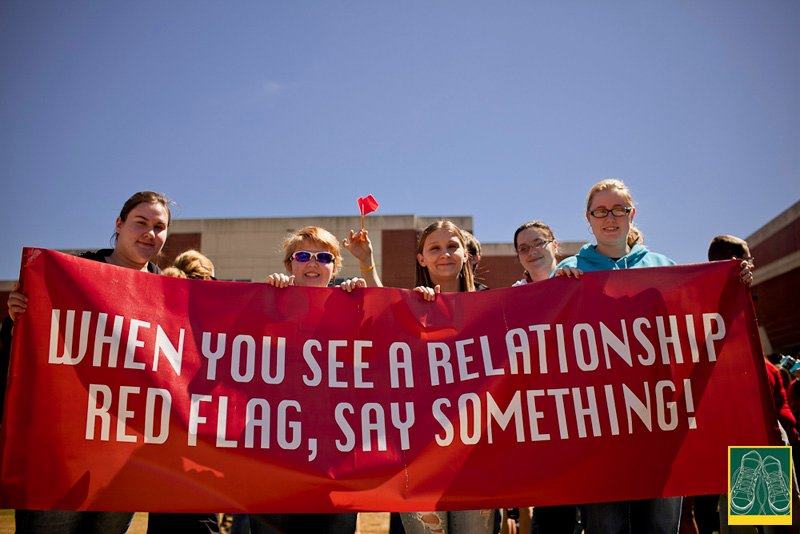 Colleges have supported the campaign by organizing awareness weeks and blanketing their campuses with red flags. Arkansas Tech University (ATU) students have embraced the Red Flag Campaign on their campus by organizing an annual dating violence awareness week. Julie Mikels-Schluterman, Professor of Sociology, brought the campaign to ATU because it coupled awareness with prevention and covered a diverse array of relationships.  More specifically, Mikels-Schluterman likes that the campaign is “diverse in the relationships it depicts, no matter what sexual orientation or race” and that the “campaign provides scripts on how you should respond if your friend is in an abusive relationship.”

In April 2011, students covered ATU’s Doc Bryan Courtyard with red flags, organized a Red Flag walk for awareness, and hosted a panel of experts on dating violence. This spring, faculty from the sociology department held a lecture to educate students about the warning signs of dating violence and sexual assault. The lecture was followed by a performance by Arkansas Tech students depicting social situations involving dating violence.

When Mikels-Schluterman brought the campaign to the campus two years ago, she was worried about whether the program would make a difference. Today, she continues the campaign at ATU because it has had such a powerful impact on students. “So many students came up to me to tell me they had gotten out of an abusive relationship because of the campaign” Mikels-Schluterman explains. “I’m so overwhelmed by the amount of support we’ve gotten from students—not just individuals but fraternities, sororities and other student organizations that are willing to help.”

The Red Flag Campaign’s Kate McCord believes community-level change, as seen on Arkansas Tech’s campus, is a top priority for the campaign. “On a community level, we want the entire campus community to understand that they can make a concrete difference in the lives of college students and increase their health and wellbeing. Dating violence is a pervasive public health problem, and it is entirely preventable.” Promoting awareness, prevention and intervention, as the Red Flag campaign and 1 is 2 many campaign do, is the crucial first step in ending violence against women.

Check back with the blog to see what Red Flag Campaign advocates are saying about Vice President Biden’s PSA!

Grace O'Malley served as a 2012 summer intern in the Office of the Vice President.