While there is more work that remains to be done, today’s employment report provides further evidence that the U.S. economy is continuing to recover from the worst downturn since the Great Depression. It is critical that we continue the policies that are building an economy that works for the middle class as we dig our way out of the deep hole that was caused by the severe recession that began in December 2007. To create more jobs in particularly hard-hit sectors, President Obama continues to support the elements of the American Jobs Act that have not yet passed, including further investment in infrastructure to rebuild our Nation’s ports, roads and highways, and assistance to State and local governments to prevent layoffs and to enable them to rehire hundreds of thousands of teachers and first responders. To build on the progress of the last few years, President Obama has also proposed an extension of middle class tax cuts that would prevent the typical middle class family from facing a $2,200 tax increase next year.

Today’s report from the Bureau of Labor Statistics (BLS) shows that private sector establishments added 103,000 jobs last month, and overall non-farm payroll employment rose by 96,000. The economy has now added private sector jobs for 30 straight months, for a total of 4.6 million jobs during that period.

The household survey showed that the unemployment rate declined from 8.3 percent to 8.1 percent in August.

Employment rose notably in leisure and hospitality (+34,000), professional and business services (+28,000), health care and social assistance (+21,700), and wholesale trade (+7,900). Manufacturing lost 15,000 jobs, including a 7,500 drop in motor vehicles and parts, which is partly payback for there having been relatively few seasonal auto plant shutdowns in July.  Over the past 30 months, manufacturers have added more than 500,000 jobs.  Government lost 7,000 jobs, as state government payrolls fell by 6,000 and local governments shed 4,000 jobs. Since February 2010, State and local governments have lost 504,000 jobs. 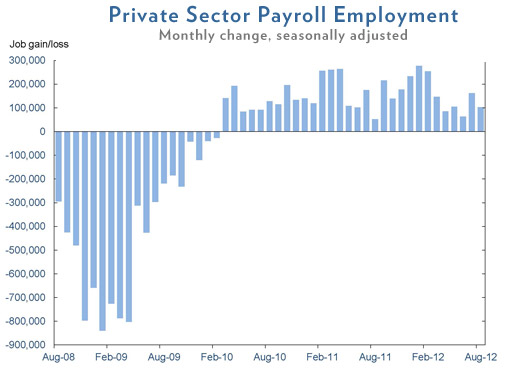