September 10, 2012 at 5:41 PM ET by Secretary Ray LaHood
Twitter Facebook Email
Summary:
The U.S. Department of Transportation commemorates September 11, as the FAA's Washington Metroplex Team names two arrival sequences to Ronald Reagan Washington National Airport to honor those who died that day and those who served our country from that day forward.

Ed. note: This is cross-posted from the U.S. Department of Transportation.

No one who was working at the Department of Transportation 11 years ago will forget the morning of September 11, 2001. Whether it was the Federal Aviation Administration's air traffic controllers, who helped bring every aircraft in U.S. airspace safely to ground, or the U.S. Merchant Marine Academy's midshipmen, who went into the chaos of Lower Manhattan to support the maritime evacuation of Wall Street workers, 9/11 is permanently etched into the Department's memory.

To commemorate that day, the FAA's Washington Metroplex Team has named two arrival sequences to Ronald Reagan Washington National Airport to honor those who died that day and those who have served our country from that day forward. Each arrival sequence is part of our new NextGen descents, which use satellite-based information to make more efficient arrivals and departures at airports. The sequences contain a series of five-letter waypoints – points in the sky through which an aircraft must fly to remain on course – and together, they spell out messages of support and remembrance for 9/11. 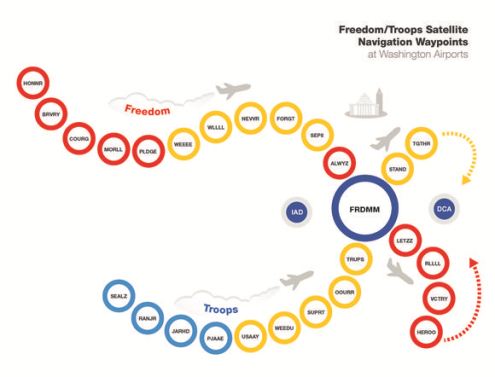 This not the first time a waypoint has been designated to recall 9/11. A waypoint published last year over Shanksville, PA, was named “GARDN” (Guardian) in honor of United Flight 93, which crashed after passengers fought with hijackers for control of the plane and prevented it from reaching Washington, DC.

The men and women of America's airways were also deeply affected by the events of September 11, and airline pilots and crews have responded strongly to these new waypoints. Recently, for example, on a morning flight from Detroit to Reagan National, a Delta Air Lines pilot came over the Public Address system and began sharing the story of the new arrival procedure with his passengers. As the flight crew began their precision descent into the capital area, the pilot read aloud the names of the waypoints they would be passing through prior to arrival: HONNR, BRVRY, COURG; MORLL PLDGE: WEEEE WLLLL NEVER FORGT SEP11, ALWYZ FRDMM.

"As he was reading them," reported one passenger, "the people were all quiet, and we all stopped talking or reading or whatever else we were doing. Everyone just listened. We could hear the pilot starting to get choked up as he talked about how proud he was to read those points off as we entered DC."

The FAA’s Metroplex initiative is creating satellite-based procedures to transform our national airspace system, making it more flexible and decreasing our carbon footprint. NextGen flight tracks, like the procedures commemorating 9/11, will relieve bottlenecks, improve safety and efficiency, and foster the flow of commerce. NextGen will deliver more on-time and fuel-efficient flights, and continue to ensure that our system remains the safest air transportation system in the world.

These descents are also powerful proof that we at DOT remember 9/11 365 days a year.