Photo Gallery: Olympic Visitors at the White House Through the Years

September 21, 2012 at 3:00 PM ET by Susan K. Donius
Twitter Facebook Email
Summary:
The holdings of the Presidential Libraries of the National Archives offer a special look at Olympic memories from the past
[[nid:178401]]

Last week, as President and Mrs. Obama welcomed the U.S. Olympic and Paralympic Teams to the White House, we were all reminded of the incredible talents and amazing journeys that these athletes shared with us, and how our summers were even more thrilling as we watched them on the world stage. It has long been a tradition for the President and First Lady to invite the Olympic teams to the White House, and as President and Mrs. Obama exclaimed last week, they, too, were fans just like the rest of us. The holdings of the Presidential Libraries of the National Archives offer a special look at Olympic memories of years past, and I hope you enjoy reliving not only the recent excitement of the London games, but also recall some wonderful memories from previous years.

This summer’s Olympics made household names out of a whole new group of dynamic athletes. Among them, of course, is the talented women’s gymnastics team. However, before the “Fab Five,” another U.S. Olympic gymnastics team captured the team gold medal, the hearts of the American public, and the attention of the First Family. President William J. Clinton, First Lady Hillary, and daughter Chelsea met with six members of the “Magnificent Seven” at the White House following the 1996 games. The William J. Clinton Presidential Library and Museum still holds pieces of Olympic history, including three Olympic torches—two from the 1996 games and one from the 1996 Paralympics, both held in Atlanta. 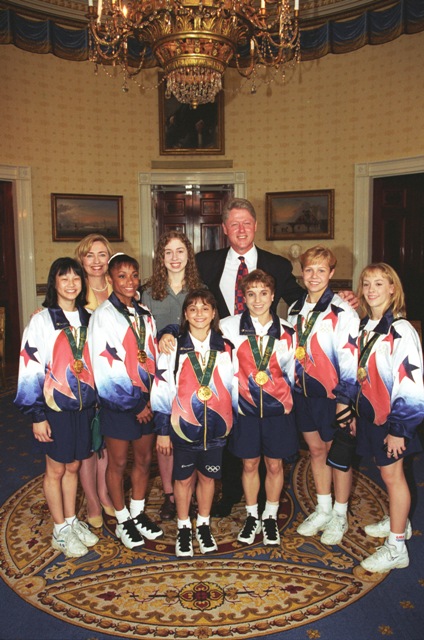 Another great moment of the White House intersecting with the Olympics was captured on film when figure skater Peggy Fleming met President Johnson after winning gold in the 1968 games in Grenoble, France. President Johnson picked a flower from a magnolia tree on the White House grounds and presented it to Fleming in the Oval Office. Asked about the visit later, Fleming revealed a little bit about her impression of the President in an interview with the Vancouver Sun : “He is a wonderful man—I adore him . . . the President wanted to talk about the Olympics, the countries I had visited and the people I had seen.”

Our Presidents have also welcomed international Olympians to the White House. In 1973, President Richard Nixon met the Soviet gymnastics team following the 1972 Munich summer games. In a pre-meeting memo to President Nixon in the holdings of the Richard Nixon Library, Soviet gymnast Olga Korbut was described as “the star of the team,” who “captured the fancy of the American public” and had received Athlete of the Year awards from multiple news outlets while on a two-week tour of the United States with her team.

Some Olympians, such as Jesse Owens, interacted with multiple Presidents over the years, particularly when their accomplishments were significant beyond the medals awarded at the podium. Owens made history in 1936, when he won four gold medals in the Berlin Summer Olympics, much to Adolf Hitler’s dismay. In 1955 President Dwight D. Eisenhower named Owens an Ambassador to Sports. The next year, he was sent as a Presidential representative to the Olympic Games in Melbourne, Australia. In 1976—40 years after the Berlin games—President Gerald R Ford presented Owens with the highest civilian honor: the Presidential Medal of Freedom, commenting that “Giants like Jesse Owens show us why politics will never defeat the Olympic spirit. His character, his achievements have continued to inspire Americans as they did the whole world in 1936.” In 1979 Owens was once again invited to the White House by President Jimmy Carter—this time to accept a Living Legends Award from the National Caucus on the Black Aged.

When Presidents and First Ladies travel to the Olympic games, they may find themselves up close and personal with the athletes they come to support. Such was the case in 2008 in Beijing, when former President George H.W. Bush and President George W. Bush congratulated U.S. Olympians Larsen Jensen and Michael Phelps after their swimming events. Before meeting the Presidents, Jensen had won a bronze medal in the 400-meter freestyle, and Phelps had set the world record in the men’s 400 medley. 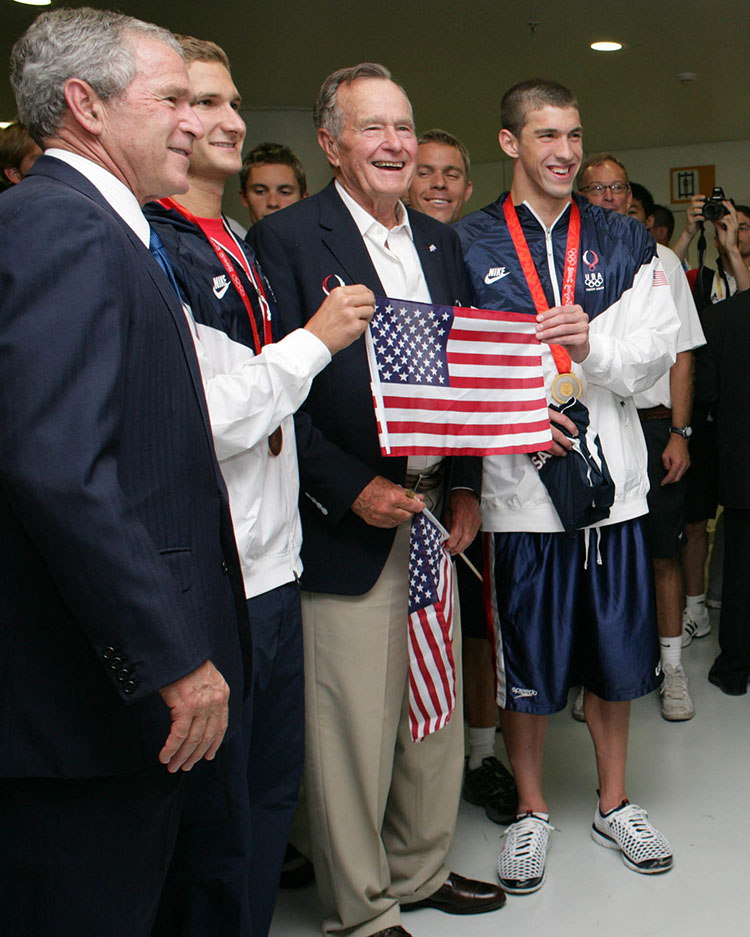 Mrs. Obama cheered on Team USA at the London games, and last week at the White House, she recalled that one of the highlights of the experience was spending time with the athletes and hearing their stories. In her welcoming remarks, she laughed about one particularly memorable moment that occurred at the U.S. Olympic Training facility in London, when wrestler Elena Pirozhkova picked her up in both arms and “literally swept me off my feet… I’ve never been picked up before by a wrestler.  It was good.” 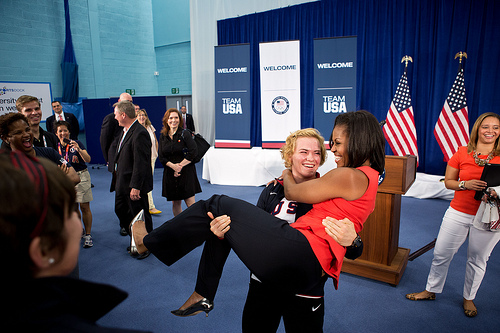 For more highlights of Presidents and Olympians through the years, take a look at this gallery from the holdings of the Presidential Libraries of the U.S. National Archives. You will also find unique holdings from the collection of the 13 Libraries nationwide.