September 21, 2012 at 11:20 AM ET by Department of State
Twitter Facebook Email
Summary:
The White House Photo Office has put together a behind the scenes look at Secretary Clinton's recent trip to Africa. Check it out 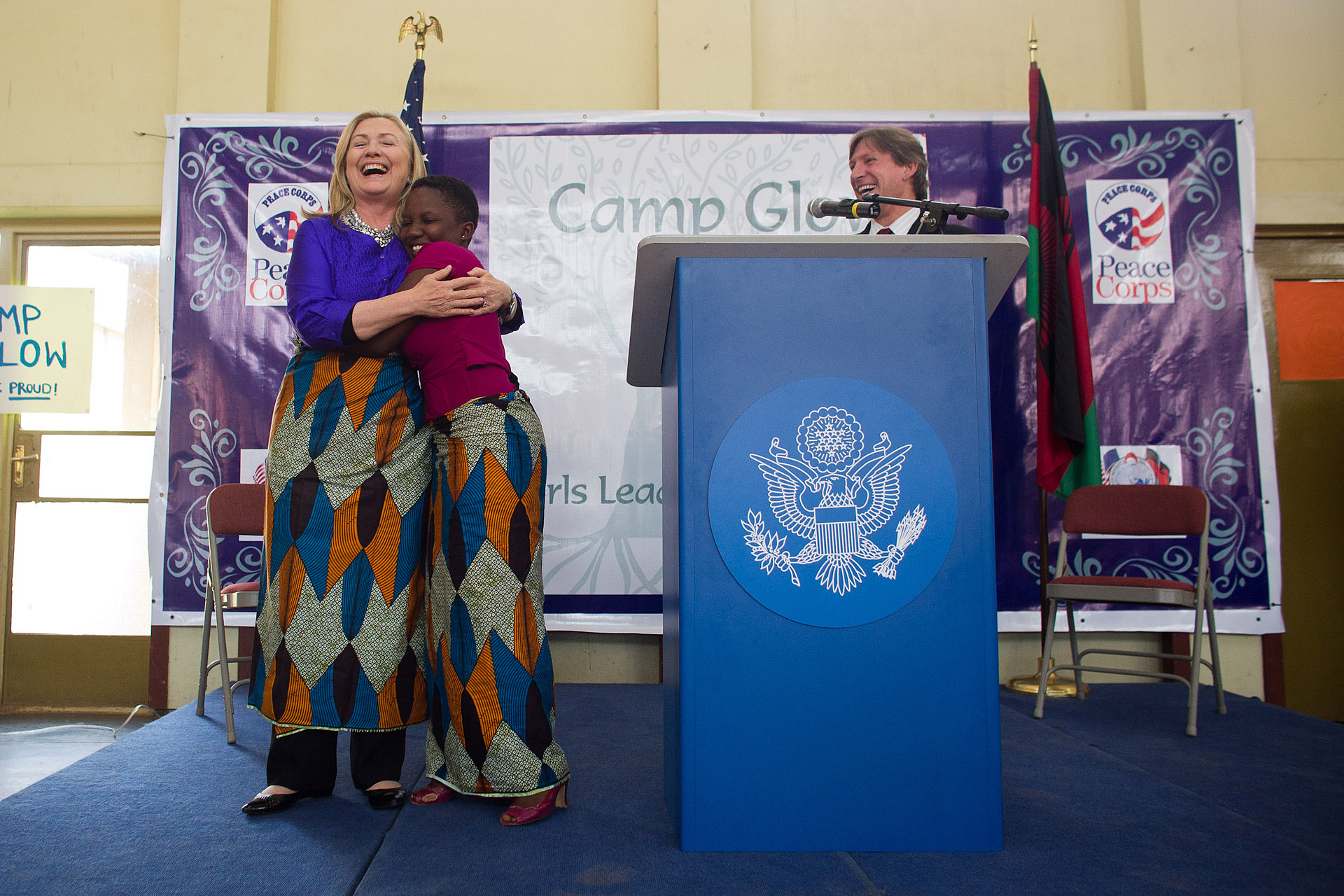 Secretary of State Hillary Rodham Clinton hugs a camper while participating in a Camp GLOW event for girls at the Lilongwe Girls Secondary School in Lilongwe, Malawi, Aug. 5, 2012. Camp GLOW (Girls Leading Our World) is a week-long program run by the Peace Corps to educate young village girls on family health issues and income generation ideas so they can share that knowledge with their communities at home. (Official White House Photo by Lawrence Jackson)

In early August, Secretary of State Hillary Rodham Clinton embarked on an 11-day, nine country trip through Africa.  She worked to strengthen alliances and advance the pillars of President Obama’s strategy for sub-Saharan Africa: supporting democratic institutions, spurring economic growth, advancing peace and security, and promoting opportunity and development.  As she said to a group of African students in Dakar: “We want to advance your aspirations and our shared values…we want this to be our mutual mission. That is the work we are called to do in the 21st century.”

In addition to the speech that framed the trip in Senegal, she met President Sall and other national leaders and spoke about how Senegal's strong democratic institutions are a model for other nations.

She then traveled east to the world’s youngest country, South Sudan, where she and President Kiir discussed security, oil and economic opportunity.

From Juba, the Secretary headed south to Uganda to meet with President Museveni and discuss the importance of democratic institutions and human rights.  She pledged U.S. support in the fight against HIV/AIDS and for greater regional security.  Additionally, she watched a demonstration of Unmanned Aerial Vehicles (UAVs) at a Ugandan military base.

She then traveled to Nairobi, Kenya to meet with President Kibaki, Prime Minister Odinga, and other government officials and reaffirm a commitment for transparent, credible and peaceful national elections in 2013. To underscore U.S. support for completing the political transition in Somalia, Secretary Clinton met with President Sheikh Sharif and other signatories to the Roadmap to End the Transition.

After Nairobi she traveled to Malawi to visit President Banda and discuss economic and political governance and reform.  She also visited a facility that helps dairy farmers produce more milk and raise their incomes, as well as a leadership academy for girls.

In South Africa, Secretary Clinton visited former President Mandela at his home in Qunu, in the Eastern Cape Province. From there she doubled back to Pretoria to participate in the U.S.-South Africa Strategic Dialogue, focusing on issues that are important to the people of both countries.  She then flew west to Cape Town where she delivered a speech at the University of Western Cape that focused on South Africa’s growing role in the region and around the world. She also recounted a moving story about Nelson Mandela, which can be viewed here.

From South Africa, Secretary Clinton turned north to Ghana to attend the funeral of late President John Atta Mills, followed by a stop in Benin to meet with President Boni Yayi.