October 5, 2012 at 12:27 PM ET by Juan Garcia
Twitter Facebook Email
Summary:
Juan M. Garcia recounts his participation in the 'Lone Sailor Awards,' an annual event that recognizes a distinguished American with ties to the U.S. Navy. 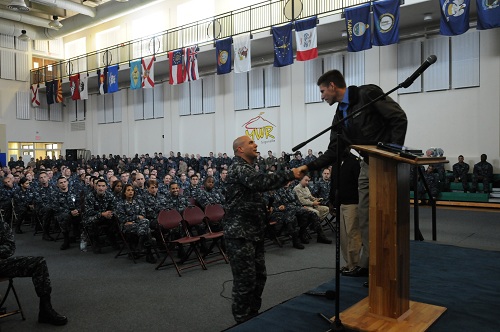 "Last evening I participated in the 'Lone Sailor Awards', an annual event that recognizes a distinguished American with ties to the U.S. Navy. The evening’s primary honoree was Everett Alvarez, a perfect way to kick-off Hispanic Heritage Month.

Ev Alvarez's incredible story embodies the core values of Hispanic America: faith, family, patriotism. This product of California's San Joaquin's Valley was a young naval aviator, piloting A-4 Skyhawks from the deck of the aircraft carrier USS CONSTELLATION in 1964, during the engagement that would come to be known as the Gulf of Tonkin, and recognized as the kick-off to the Vietnam War. When enemy anti-aircraft artillery hit his aircraft, he was forced to eject over Vietnam. Captured, he would go on to spend the next 8 1/2 years in the infamous "Hanoi Hilton." Enduring intense physical torture, long periods of solitary confinement, and psychological punishment, Alvarez remains the longest held Prisoner of War in American history.

Only his faith borne by a Catholic upbringing, his commitment to see his family once again, and a patriotism that steeled him during those brutal torture sessions, allowed him to "Return with Honor." Commander Alvarez would physically rehabilitate, and re-qualify in the aircraft.  After his naval service, Alvarez would go on to serve as the Deputy Director of the Peace Corps, and a senior leader at the Veteran's Administration.

Today students who attend Everett Alvarez High School in Salinas, California, or use the Post Office named in his honor, and thousands of others inspired by his courage, follow his footsteps, and in the great American tradition, seek to earn a place at the national table through service to the country. They seek to earn a place at that table through their sweat, their work, and in some cases their blood. They use a GI Bill to attend college, a VA Loan to purchase a home, or hang out a shingle and start a small business.  It's America at it's best.

President Obama's commitment and support for the 9-11 GI Bill, which for the first time builds on this iconic program by making the benefit transferable to a spouse or the children of a veteran, serves to extend that great tradition to the next generation."

Juan M. Garcia is the Assistant Secretary of the Navy (M&RA)