PortfolioStat: Saving Billions in IT Spending

October 24, 2012 at 9:06 AM ET by Jeffrey Zients
Twitter Facebook Email
Summary:
Over the last six months, agencies across the Federal government have been undertaking a coordinated effort to scour their IT budgets to find unnecessary IT spending and develop a plan to root out waste. This effort – called PortfolioStat – has resulted in ambitious plans that will save the government $2.5 billion over the next three years through consolidating duplicative systems, buying in bulk, and ending or streamlining off-track projects.

Over the last six months, agencies across the Federal government have been undertaking a coordinated effort to scour their IT budgets to find unnecessary IT spending and develop a plan to root out waste. This effort – called PortfolioStat – has resulted in ambitious plans that will save the government $2.5 billion over the next three years through consolidating duplicative systems, buying in bulk, and ending or streamlining off-track projects.

From day one, the President has made it a priority to reform the way the Federal Government does business to ensure we’re serving the American people as efficiently and effectively as possible. Just two months into the Administration, we launched the IT Dashboard to bring unprecedented transparency and accountability to government IT projects. We also launched TechStat accountability reviews of high priority IT projects, using the dashboard as a managing tool and saving taxpayers over $4 billion dollars. 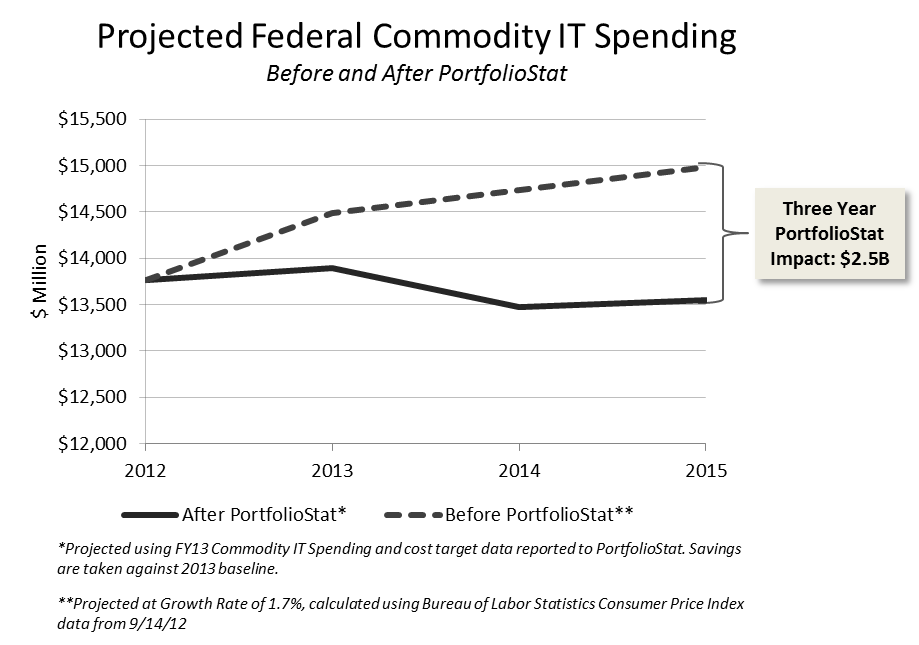 Building on these achievements, we launched PortfolioStat this year to ensure we are targeting our investments where they will deliver the greatest value to the American people. Under PortfolioStat, agencies have collected and analyzed baseline data on 13 specific types of commodity IT investments, spanning infrastructure, business systems, and enterprise IT.  These areas have the most significant opportunities for reducing waste. OMB worked with agencies to review their data and compare their spending to other agencies and private sector benchmarks in order to assess the agency’s current state and develop a list of opportunities to reduce inefficiency, duplication, and unnecessary spending. Based on this analysis, agencies drafted PortfolioStat plans, which were then reviewed in Deputy-Secretary-led PortfolioStat sessions with the Federal Chief Information Officer.

What came out of this thorough process were thoughtful and ambitious plans to root out IT waste. Agencies identified 98 opportunities to consolidate or eliminate commodity IT areas, ranging from the consolidation of multiple email systems across an agency to the reduction of duplicative mobile or desktop contracts. For example, the Department of Homeland Security will save $376 million over the next three years on their IT infrastructure, including mainframe and server products, by leveraging the bulk buying power of the entire department.

The Social Security Administration (SSA) is implementing an enterprise-wide purchasing program and they are leveraging their buying power to save $59 million – more than $760 for every computer. And the Department of Treasury will consolidate key financial management systems, which will save $90.3 million. By implementing a central hub for all vendor payment data for Federal agencies and their vendors, Treasury is cutting out inefficiencies for agencies and companies small and large that do business with the Federal government. These efficiencies can then be passed on as future price savings for agencies and the taxpayers.

Today’s announcement is a critical next step on our aggressive path to deliver taxpayers the best bang for their buck, while putting an end to the kind of inefficiencies that plagued Federal IT during past Administrations. Moving forward, we will be holding PortfolioStat sessions, not only to push agencies to execute on their plans in a timely manner, but also to identify additional areas of savings. It’s a sustained commitment to this kind of accountability on behalf of the American people that has driven and will continue to power the Administration’s imperative to innovate with less.

Jeffrey Zients is the Deputy Director for Management.