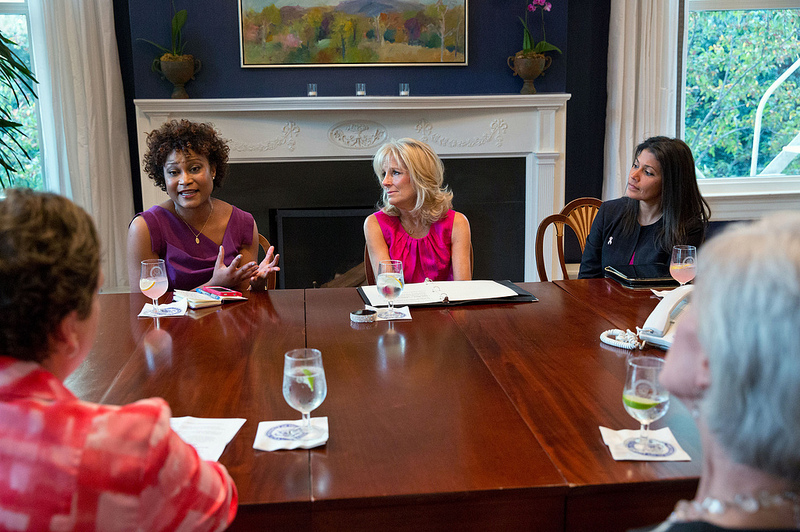 Yesterday afternoon, we were honored to host three breast cancer survivors at the Vice President’s Residence for a Breast Cancer Awareness Month conference call to remind advocates around the country about the importance of early detection and prevention.

We heard from Myrna Rodriguez Previte, a breast cancer survivor who struggled to get health insurance as a self-employed real estate broker. When she was diagnosed in 2003 at age 36, she was refused coverage by insurance company after insurance company. Myrna eventually received coverage as a newlywed because she was getting married and was soon covered under her husband’s policy.

But as Myrna noted, because of the Affordable Care Act, starting in 2014, insurance companies will no longer be able to discriminate against anyone in her situation for having breast cancer as a pre-existing condition.

Myrna has since founded Amigas Unidas, a peer-to-peer breast cancer organization that works with Latina women to provide bilingual and financial services.

We heard from Carla Hill, a two-time breast cancer survivor, who is now a spokeswoman and advocate for early detection, awareness, and researching the impact of breast cancer on young women, especially those of African descent in the Caribbean.

As a young adult, Carla suffered from serious kidney disease and, received a kidney transplant. Just a few years later she was diagnosed with breast cancer the first time. Two years later, in 2007, she found out it had returned. Now in remission, Carla and her husband founded the Carla Hill Breast Cancer and Organ Donation Awareness Fund.

And we heard from Robianne Schultz, an 11-year breast cancer survivor, who has been diagnosed three times with breast cancer that has spread to other parts of her body. After her most recent reoccurrence in June 2011, Robianne had one-third of her liver removed. She continues to fight her cancer through ongoing maintenance chemotherapy and will have another surgery in a few weeks.  Robianne is involved with her local American Cancer Society Relay for Life as their advocacy and mission chair.

We were so impressed by the stories these three women told us. Carla, Myrna, and Robianne have all turned their personal battles with this disease into widespread advocacy and leadership in the fight against breast cancer.

Every survivor is a powerful reminder of how far we have come in the fight against breast cancer – and it is through their stories that we are all reminded of the progress that has been made and the work that remains to be done toward a future free of breast cancer.

Dr. Jill Biden is the Second Lady of the United States and Kathleen Sebelius is the Secretary of Health and Human Services.