Earlier this week, Special Assistant to the President and Senior Director for African Affairs Grant Harris met with a group of twenty-seven young African leaders at the White House, continuing the Administration’s engagement with Africa’s next generation of leaders. These distinguished young leaders were selected from twenty-three nations across sub-Saharan Africa to participate in a U.S. Department of State International Visitor Leadership Program entitled “'Young African Leaders:  Grassroots Democracy and the U.S. Elections.”  The objectives of this particular program are to provide an understanding of democracy in the U.S. and the significance of citizen participation in the democratic process; examine how citizen action groups interact with U.S. elected officials in an effort to influence political, social, and economic change; observe mechanisms for voter outreach; and explore the diversity of views held by Americans and how this diversity contributes to a dynamic and resilient political system.

The U.S. Strategy Toward Sub-Saharan Africa, released in June 2012, prioritizes efforts to empower Africa’s next generation of leaders.  President Obama highlighted this when he announced the Strategy, saying:  “These young men and women have shown time and again the willingness and ability to change their communities and their countries for the better, and the United States will continue to be their steadfast ally and partner.” 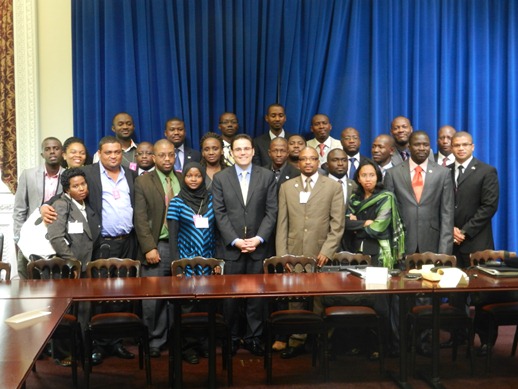 (Courtesy of the U.S. Department of State)

The President’s Young African Leaders Initiative (YALI) is designed to build on and institutionalize the Administration’s outreach to young African leaders by focusing on three lines of effort:  (1) support leadership development; (2) promote entrepreneurship; and (3) connect young leaders with one another and with Americans.

Senior Director Harris led a discussion with the visiting young African leaders on the U.S. Strategy Toward Sub-Saharan Africa and the goals of YALI, encouraging them to share their ideas on how the United States can better engage their generation and maximize support for the development of leadership and entrepreneurial skills across sub-Saharan Africa.  Mr. Harris also directed a fruitful Q&A session with the young leaders, which keyed in on many important issues such as globalization and economic growth; battling corruption; U.S. trade and development policies; and engagement with the growing number of organizations representing women and youth across Africa.  Mr. Harris also highlighted the importance that the United States places on encouraging peaceful and credible elections, and fostering stronger democratic institutions across sub-Saharan Africa.

In closing the session, Mr. Harris asked the young leaders to remain engaged in both their own communities and with the United States as we continue to work as partners seeking additional ways to connect with and support Africa’s rising generation of leaders.