While more work remains to be done, today’s employment report provides further evidence that the U.S. economy is continuing to heal from the wounds inflicted by the worst downturn since the Great Depression. It is critical that we continue the policies that are building an economy that works for the middle class as we dig our way out of the deep hole that was caused by the severe recession that began in December 2007.

Most pressing, President Obama has proposed, and the Senate has passed, an extension of middle class tax cuts that would prevent the typical middle class family from facing a $2,200 tax increase at the beginning of next year. In addition, the President has proposed a plan that will enable responsible homeowners to refinance their mortgage and take advantage of today’s historically low interest rates. To create more jobs in particularly hard-hit sectors, President Obama continues to urge Congress to pass elements of the American Jobs Act, including further investment in infrastructure to rebuild our Nation’s ports, roads and highways, and assistance to State and local governments to prevent layoffs and to enable them to rehire hundreds of thousands of teachers.

Today’s report from the Bureau of Labor Statistics (BLS) shows that private sector businesses added 184,000 jobs last month, the biggest monthly gain in eight months. Total non-farm payroll employment rose by 171,000 jobs in October. Revisions to the previous two months added another 84,000 jobs.  The economy has now added private sector jobs for 32 straight months, and a total of 5.4 million jobs have been added during that period, taking account of the preliminary benchmark revision.

Over the last 12 months, the economy has added a total of 2.1 million jobs, as compared to 1.9 million over the preceding 12 months (apportioning the preliminary benchmark revision). 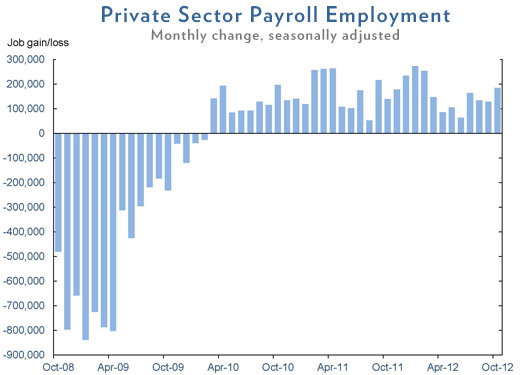