So Who Were Those 14 People Standing Behind the President?

November 13, 2012 at 1:30 PM ET by Megan Slack
Twitter Facebook Email
Summary:
Fourteen people stood behind the President as he laid out his strategy for moving our country forward. Learn who they were and what brought them to the White House. 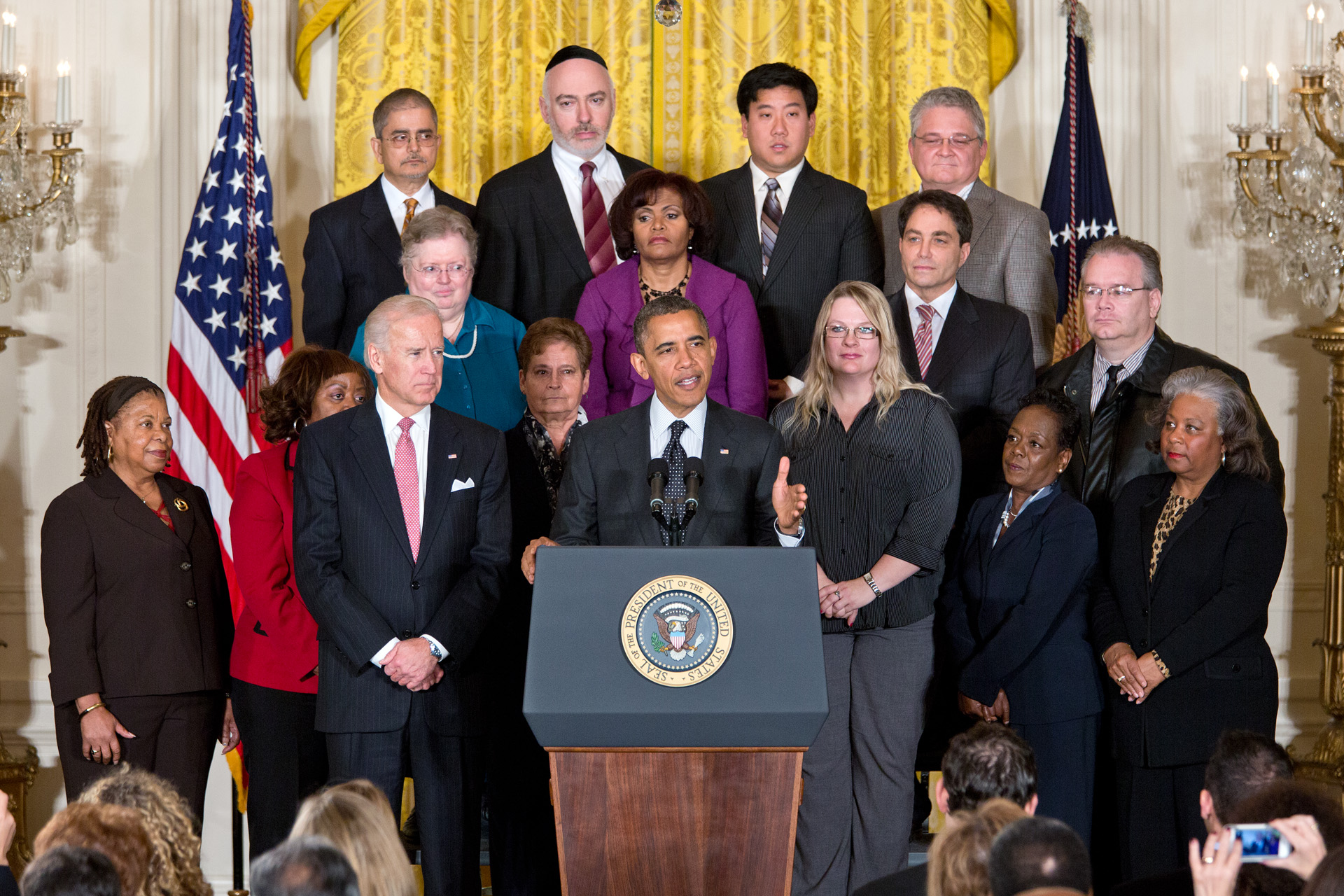 President Barack Obama delivers a statement to the press on the economy, in the East Room of the White House, Nov. 9, 2012. (Official White House Photo by Sonya N. Hebert)

On Friday, President Obama laid out his strategy for moving our country forward and reducing our deficit in a balanced way.

Speaking from the East Room of the White House, the President was joined by Vice President Joe Biden – and 14 others stood behind him at the podium.

So who were those 14 people anyway? One was Pam, a school administrator. Another, Sara, is a veteran recovering from open-heart surgery. Barry has six children and Steve is an orthopedic assistant. Estela recently became an American citizen and voted in a U.S. election for the first time on Tuesday.

What they all have in common, however, is an interest in helping find answers to some of the big questions we face as a nation. Whether it’s how to create jobs or how to help responsible homeowners or how to balance investments in our future with cutting our deficit, all of these citizens want to participate in the process of getting things done here in Washington.

Each of them had already taken the first step by speaking out about an issue that mattered to them, responding to requests for input on whitehouse.gov.

Now, with lawmakers facing a series of deadlines that require major decisions about how to pay our deficit down, we put together an afternoon at the White House that would bring these same folks into the conversation about how those decisions will affect the middle class -- people like them. They would get the chance to stand behind the President during his remarks, and then take part in a discussion with Jason Furman, Assistant to the President for Economic Policy and the Principal Deputy Director of the National Economic Council.

Gathered in the Blue Room before the President addressed the gathered crowd, they talked with each other about what it meant to be invited into the White House. All of them had been contacted just one day before and asked if they would like to stand behind the President, and several said it had been a hectic but exciting 24 hours. Pam said she had a dream four years ago about meeting President Obama and that the opportunity “was literally a dream come true” (but both she and Brenda admitted they hadn’t slept a wink the night before).

Shirley said visiting the White House was meaningful to her because it signaled that President Obama and his administration wasn’t interested in just talking at the American people, but with them. It was clear to her the President was ready to get down to business, and work with others to get things done. “That work begins now,” she said.

Kathleen said our country was going to have to work together to solve the problems we face. “We have to work together to make this nation a great nation.” And she saw herself and others like her – as well as people who weren’t like her -- as part of a diverse problem-solving coalition. We need to focus on what’s best for everyone, not just a select few, she said. “If we don’t move forward together, what’s the point?”

We have to do “what’s going to be the best for the people, all the people,” Shirley added.

A few minutes before the President was scheduled to speak, he arrived in the Blue Room to shake everyone’s hand and thank them for being there. Vice President Biden entered the room shortly after that to say hello. Then, the group of 14 filed into the East Room and took their places on the risers.

After the remarks (and a few celebratory hugs among new friends), the group walked over to the Eisenhower Executive Office Building for the discussion with Jason Furman. Macon Phillips, Director of White House Digital Strategy, spent a few minutes with the participants, explaining that the chat would be an informal one, and a chance to ask questions that they and others might have about the President’s plans for the coming months.

Once Furman arrived, the group had many good questions. Barry wanted to know about how losing marriage penalty relief and the Child Tax Credit, which are scheduled to expire if Congress doesn’t take action before the end of the year, would affect families like his.

Pam asked if the President had any plans to help create jobs. He does, Furman said, including proposals to invest in infrastructure, offer tax credits to small businesses that hire new workers or increase wages, and support teacher jobs.

Estela and Pam both asked about plans to help responsible homeowners like themselves, who had been making their mortgage payments on time but were locked out of refinancing at a lower rate.

Kathleen wanted to know how the large, across-the-board spending cuts scheduled to kick in at the end of the year if lawmakers don’t decide on a deal to lower the deficits would affect federal workers. Furman explained that such cuts could be avoided altogether by getting serious about finding a deficit solution that balances more revenue with smart spending cuts.

Furman told the group that he had to head back to his office so he could get to work, but thanked everyone for their time and encouraged them to stay involved.

Packing up to go home, a couple people began to check their phones for missed calls and messages. “My colleague says I looked great behind the President,” Barry said. “How many people get to say that?” Steve said his brother wanted his autograph.