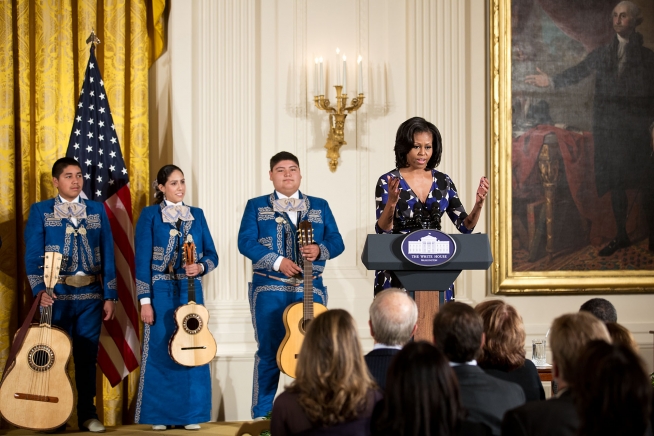 First Lady Michelle Obama, the honorary chair of the President's Committee on the Arts and the Humanities, hosts the PCAH National Arts and Humanities Youth Program Awards in the East Room of the White House, Nov. 19, 2012. Mariachi Desoro is on stage behind Mrs. Obama. (Official White House Photo by Chuck Kennedy)

These exemplary after-school and out-of-school arts and humanities program are recipients of the President’s Committee on the Arts and Humanities National Arts and Humanities Youth Program Awards. Their work fosters the creative and intellectual development of America’s youth through education and practical experience in the arts.

I know that many of you who are here today, you make all this happen on shoestring budgets; you do it in unbelievable ways, in some of the most difficult circumstances imaginable.  And I know that you put a lot of late nights and long hours in to give these kids opportunities worthy of their promise.

But you keep on doing this year after year because you have seen firsthand the transformative power of the arts and arts education in the lives of young people across this country.  You know that the skills that you’re teaching -- skills like problem-solving and teamwork, self-expression -- these skills aren’t just valuable in the studio or in the theater, but they are critical in the classroom and will be in the workplace when you all get there.

A group of students from the Mariachi Master Apprentice Program also performed at the event. 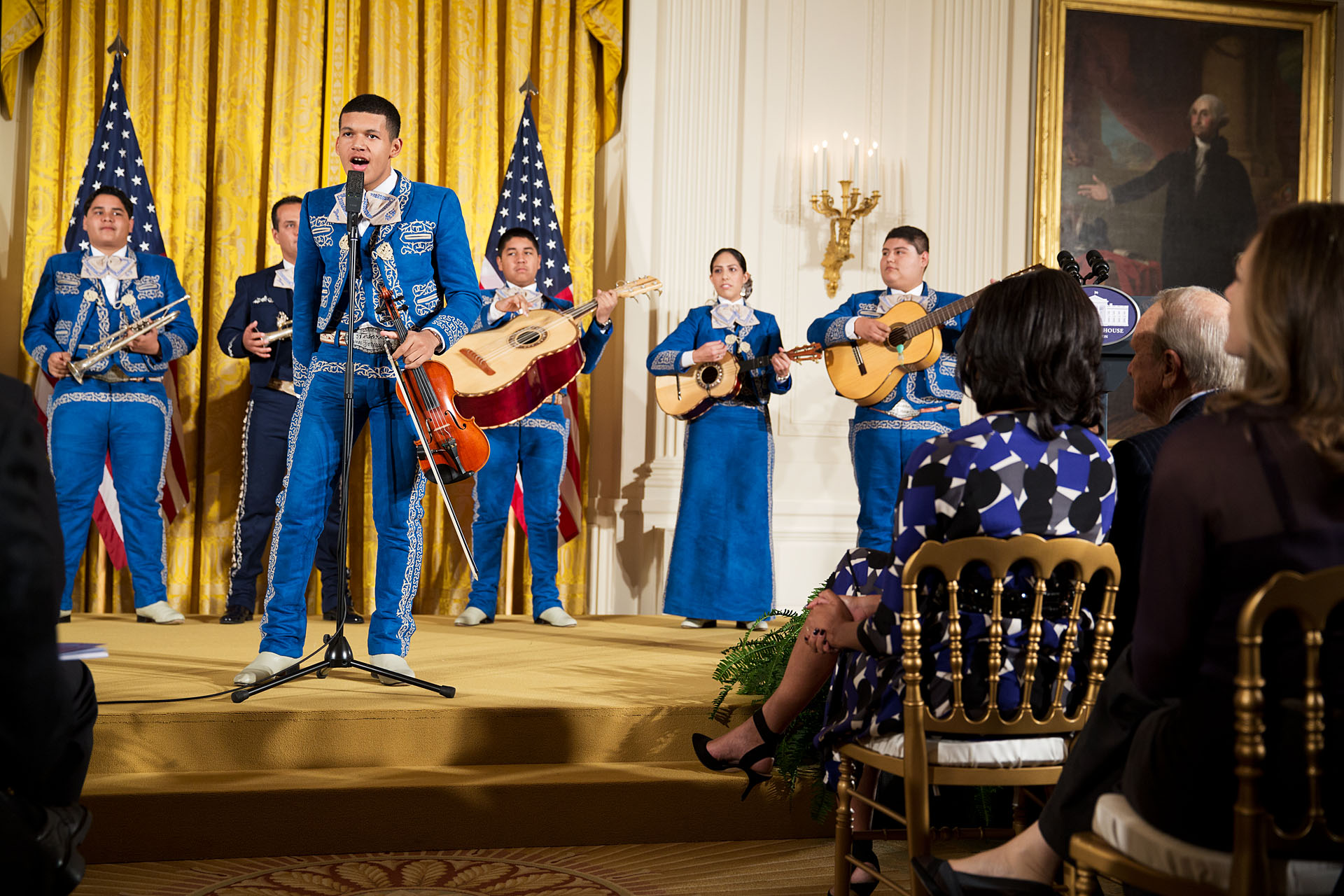 First Lady Michelle Obama, the honorary chair of the President's Committee on the Arts and the Humanities, listens as Mariachi Desoro performs during the the PCAH National Arts and Humanities Youth Program Awards in the East Room of the White House, Nov. 19, 2012. (Official White House Photo by Chuck Kennedy)

African Cultural Connection (ACC) provides youth throughout the state of Nebraska with year-round residencies and workshops that focus on traditional African art forms. By engaging students in activities such as drumming, dancing, storytelling, jewelry making, and textile design, the program presents an in-depth perspective on the culture and history of Africa, particularly that of West Africa.

Arts Corps was founded in 2000 as a strategy to bring out-of-school arts and creative engagement to low-income communities. A multidisciplinary program, Arts Corps partners with a wide range of community organizations and agencies to bring after-school arts classes to 2,000 K-12th grade students every year, at over 30 sites throughout Seattle. Professional teaching artists are placed at partner sites to lead classes in dance, digital media, music, spoken word, theatre, and visual arts.

AS220 Youth is a free arts education program serving young people ages 14-21, with a special focus on those in the care and custody of the state. AS220 serves over 450 Rhode Island youth in three separate sites – the Rhode Island Training School (RITS), Urban Collaborative Accelerated Program (UCAP) – a nationally recognized Rhode Island public middle school dedicated to keeping at-risk kids in school, and AS220’s downtown Providence studio. The program goal is to engage youth in a creative process that will lead to positive social, educational, and vocational outcomes.

Out-of-school programs for teens at the ICA provide young people with the opportunity to engage with art, artists, and the creative process, while also developing confidence and transferable skills. Out-of-school programs for teens utilize the ICA’s physical and artistic resources, including contemporary art and artists, to address a wide range of topics such as personal identity, social change, and innovation.

Myth and the Hero (Copley, OH)

Myth and the Hero is a humanities-based program that supports the development of African-American adolescent males through the telling, discussion, and interpretation of mythology and fairy tales told to the beat of an African drum. The program offers weekly support groups that utilize the analysis of mythological stories and fairy tales to explore themes that are relevant to the lives of the participants, such as sacrifice, conflict resolution, perseverance, humility, and confidence

The New York City Urban Debate League (NYCUDL) program is dedicated to giving all students the opportunity to become highly-skilled debaters. Since the program’s inception, the NYCUDL has partnered with schools across New York City, particularly Title I public schools, to build successful debate teams. This network of over ten schools offers an array of workshops held after school, on Saturdays, and during the summer. Each workshop immerses the participants in a number of subjects including public speaking, research techniques, philosophy, public policy, civics, international affairs, law, and ethnic studies.

Out of School Programs (Bronx, NY)

Paso Nuevo is a year-round after-school performance workshop for Latino and multicultural youth, ages 12- 18. While incorporating aspects of acting techniques (including voice and movement), the program focuses on individual creative expression and performance in a safe, collaborative environment. Paso Nuevo uses theatre arts as a vehicle for enhancing self-esteem, developing language and communication skills, strengthening cultural identity, and promoting literacy in both English and Spanish.

RISE! (Rhythm in Setting Expectations) is a multidisciplinary program that provides underserved youth, ages 7-17, with year-round arts-based workshops. The program is housed in the historic Attucks Theatre, a 30,000 square foot facility, which is the oldest theatre in the country that was constructed, owned, and operated by African Americans and considered to be a national landmark.

Youth Radio is a Peabody Award-winning youth media organization that provides free, intensive training in media arts and journalism to underserved youth, ages 14-18. Upon completing six months of intensive media training, participants are able to work as interns on a diverse range of arts and humanities programs at Youth Radio that cover areas such as arts and culture, a spoken word showcase, eclectic/urban music, and current events.