November 20, 2012 at 10:20 AM ET by Erin Lindsay
Twitter Facebook Email
Summary:
On Wednesday, President Obama will "pardon" the 2012 National Thanksgiving Turkey and this year, for the first time, the American public will decide.

Turkeys have been carving out a special place in American history since 1963. That's when John F. Kennedy became the first U.S. President to "pardon" a turkey at the White House -- a tradition that's grown to be known as the National Thanksgiving Turkey Presentation.

On Wednesday, President Obama will pardon the 2012 National Thanksgiving Turkey and this year, for the first time ever, the American public will get its say. People all across the country are flocking to cast their vote.

Which of two turkeys will be named the 2012 National Thanksgiving Turkey?

Born on the same day on a farm in Rockingham Country, Virginia, Cobbler and Gobbler may look alike, but they're no birds of a feather. Cobbler craves cranberries, is known for his strut, and enjoys the musical stylings of Carly Simon. Gobbler, a patient but proud bird, loves to nibble on corn and enjoys any music with a fiddle.

Polls close at 8:00 pm ET on Tuesday, November 20th 2012, so be sure to visit the White House Facebook page to cast your vote. 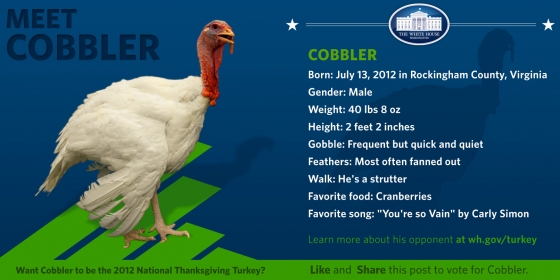 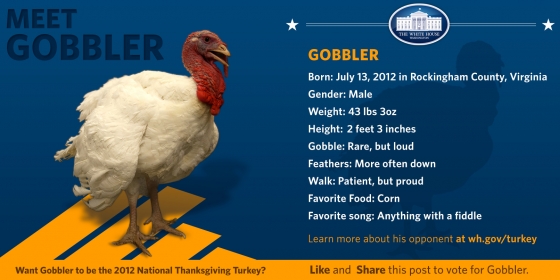 Don't forget to tune in to the 2012 ceremony on Wednesday, November 21st on http://wh.gov/live at 2:00 pm ET to find out which turkey has been selected as the 2012 National Thanksgiving Turkey. And for more on how this Presidential tradition came to be check out the definitive history of the Presidential Turkey Pardon.